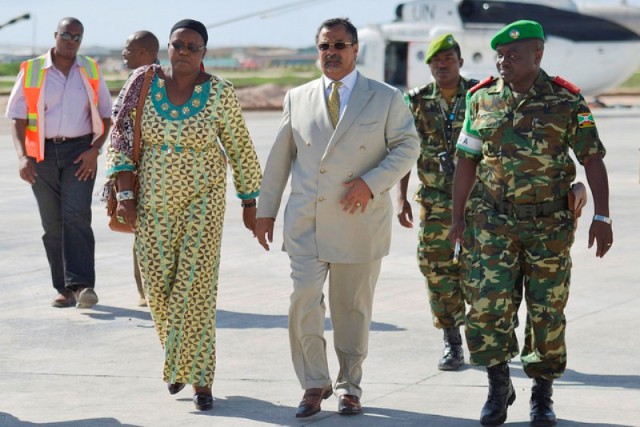 According to a press release from the UN Assistance Mission, (UNSOM), Nicholas Kay, Mission chief and Special Representative of the Secretary-General for Somalia, presided over the formal inauguration in Mogadishu of the first-ever United Nations Guard Unit (UNGU).

The UNGU is made up of 410 troops provided by the Uganda People’s Defence Forces (UPDF). The Guard Unit, led by a Ugandan Commander, falls under the responsibility of Mr. Kay, the UN designated official in Somalia. Officially starting its duties on 15 May, the Unit is a “static force” that will be based at Mogadishu International Airport.

This echoes Mr. Ban’s vision that the Guard Unit would form part of the UN’s overall security concept by providing “inner ring” static protection for the compounds of UNSOM and the UN Support Office for the African Union Mission in Somalia (UNSOA), located inside the airport.

“The deployment of the UN Guard Unit is an important step as we continue to expand our operations in support of the Somali people,” Mr. Kay said at the event. “We are deeply grateful to Uganda for its continued contribution to peace- and State-building in Somalia.”

He also thanked the Government and people of Somalia, and the African Union Mission in Somalia (AMISOM), for their support for the Guard Unit “and for the protection they provide to the UN.”

“The Ugandan Government is committed to supporting our Somali brothers and sisters in their efforts to attain lasting peace,” said Lt. Gen. Charles Angina, Deputy Commander of the UPDF’s Land Forces. “We are proud to join the UN family, and will do our utmost to ensure the UN is able to continue its work in Mogadishu under safe and secure conditions.”

The formation of the Guard Unit was approved by the UN Security Council following a recommendation for its deployment by the Secretary-General.

The UN launched with the African Union (AU) a joint assessment mission to Somalia from 26 August and 6 September 2013, amid deteriorating security in the country and in the wake of the attack on the UN common compound on 19 June 2013 in Mogadishu, in which one UN staff member, three personnel of a company contracted by the United Nations and four non-UN security guards were killed.

Mr. Ban recommended the establishment of a special protection force in a follow-up letter to the Security Council in which he expressed serious concern that the mission concluded that political progress made in Somalia in 2013 and the military gains against Al-Shabaab achieved in recent years “are at serious risk of being reversed.”

The UN chief sent another letter to the Council outlining his specific recommendations on the force strength and responsibilities of the Unit, which would “comprise a guard battalion and an extraction and reinforcement team, supported by an adequately composed logistic company.”  sources: UNSC press briefing and UN office in Mogadishu.