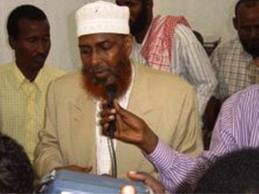 New York (HAN) On 14 March 2014 – The Security Council Committee pursuant to resolutions 751 (1992) and 1907 (2009) concerning Somalia and Eritrea approved the removal of the individual specified below from the List of individuals and entities subject to the travel ban, assets freeze and targeted arms embargo imposed by paragraphs 1, 3 and 7 of resolution 1844 (2008):

Ali Ahmed Nur Jim’ale (Jim’ale) has served in leadership roles with the former Somali Council of Islamic Courts, also known as the Somali Islamic Courts Union, which was a radical-Islamist element. The most radical elements of the Somali Islamic Courts Union eventually formed the group known as al-Shabaab. Al-Shabaab was listed for targeted sanctions in April 2010 by the United Nations Security Council Committee established pursuant to resolutions 751 (1992) and 1907 concerning Somalia and Eritrea (the “Somalia/Eritrea Sanctions Committee”). The Committee listed al-Shabaab for being an entity engaged in acts that directly or indirectly threaten the peace, security, or stability of Somalia, including but not limited to acts that pose a threat to Somali Transitional Federal Government.

According to the July 18, 2011 report of the Somalia/Eritrea Sanctions Committee’s Monitoring Group (S/2011/433), Jim’ale is identified as a prominent businessman and figure in the al-Shabaab charcoal-sugar trading cycle and benefitting from privileged relationships with al-Shabaab.

Jim’ale is identified as one of al-Shabaab’s chief financiers and is ideologically aligned with al-Shabaab. Jim’ale has provided key funding and political support for Hassan Dahir Aweys (“Aweys”), who was also listed by the Somalia/Eritrea Sanctions Committee. Former al-Shabaab Deputy Emir Muktar Robow reportedly continued to engage in political posturing within the al-Shabaab organization during the mid-2011. Robow engaged Aweys and Jim’ale in an effort to advance their shared objectives and consolidate their overall stance within the context of the al-Shabaab leadership rift.

As of fall 2007, Jim’ale established a front company in Djibouti for extremist activities called the Investors Group. The short term goal of the group was, through the funding of extremist activities and weapons purchases, to destabilize Somaliland. The group assisted in smuggling small arms from Eritrea through Djibouti into the 5th region of Ethiopia where extremists received the shipment. As of mid-2008, Jim’ale continued to operate the Investors Group.

As of late September 2010, Jim’ale established ZAAD, a mobile-to-mobile money transfer business and struck a deal with al-Shabaab to make money transfers more anonymous by eliminating the need to show identification.

As of late 2009, Jim’ale had a known hawala fund where he collected zakat, which was provided to al-Shabaab.

As of December 2011, unidentified donors from the Middle East were transferring money to Jim’ale, who in turn used financial intermediaries to send the money to al-Shabaab.

In 2009, Jim’ale worked with other like minded individuals to undermine the Somali TFG by not participating in Somali reconciliation efforts. As of late 2011, Jim’ale actively supported al-Shabaab by offering free communications, use of vehicles, food aid and political advisement and set up fundraisers for al-Shabaab through various business groups.

To obtain a fully updated version of the List of individuals and entities subject to the sanctions measures, Member States are encouraged to consult, on a regular basis, the Committee’s website at the following URL: http://www.un.org/sc/committees/751/pdf/1844_cons_list.pdf.