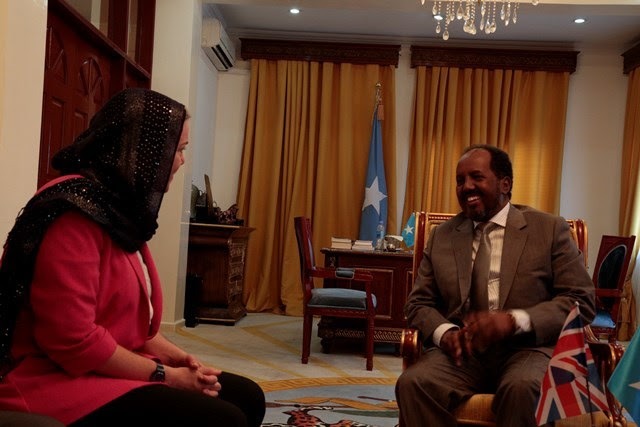 Following the Somalia presidential palace ceremony, Ms Mathews said she is delighted by the warm welcome that she received from the government and the people of Somalia. Ms Mathews was awarded the OBE (Order of British Empire) in 2005 for her work in West Africa.

According to the new British higher commision in Somalia Ms Mathews “Britain will support Somali plans to improve security and re-build national defense forces to protect its borders”.
The UK has committed to help the new government of Somalia to tackle the threat of international terrorism, crime and piracy by helping it to manage its public finances, cope with future famines and create a more peaceful and secure future.

Somali Federal Government will facilitate to improve the renegotiate agreement that gives a British company run by former British soldiers sole control over one of the world’s richest fishing grounds -the longest coastline in Africa. The British deal, signed on July 25, 2013 with Mauritius-registered Somalia Fishguard Ltd., provided the British company with an “extremely high” share of the revenue, according to the letter addressed to Fishguard’s Chief Executive Officer, Simon Falkner, who said the contract remains valid.

The British government endorsed the Somali government’s plans for developing the country’s armed forces, police, justice and public financial management systems. These plans are a pivotal part of tackling poverty, improving security and tackling the root causes of humanitarian disasters, mass migration, terrorism and piracy.
-Britain will support the Somali government’s plans to develop effective and legitimate national security forces that can protect people and preserve public order. UK support will include military experts to advise the Somalis as they develop their armed forces.

Somalia has begun a rapid recovery in 2013, but this will be put at risk if the Somali government cannot manage its own public finances properly, avoid future famines or tackle terrorism and piracy. Britain’s new package of support will help ordinary Somalis across the country to start getting the day-to-day assistance they need to get on with their lives and rebuild their country.
Photo: British Ambassador Harriet Matthews and President Hassan Sheikh Mohamud