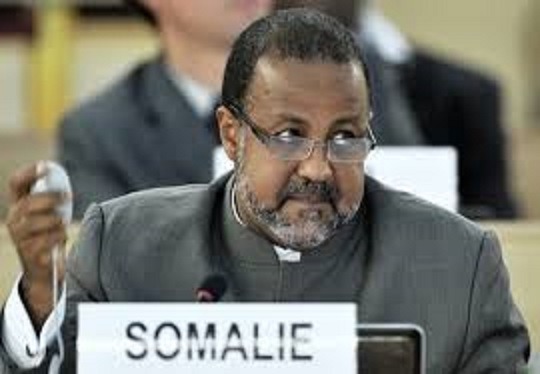 The United Nations Human Rights Council observed a minute of silence this afternoon in memory of Ambassador Yusuf Mohamed Ismail “Bari Bari”, Permanent Representative of the Federal Republic of Somalia to the United Nations Office and other international organizations in Geneva, who lost his life on Friday as a result of a terrorist attack in Mogadishu.

Members of the Human Rights Council were shocked and deeply saddened to learn of the death of Ambassador Bari, who was a well-known figure in Geneva, widely respected and admired for his strong leadership and unwavering commitment to human rights.

“Ambassador Bari was a true champion of human rights. His tireless work within the Human Rights Council to promote and protect human rights, in particular in Africa, was recognized by many and is honoured by us all”, stated Ambassador Joachim Ruecker, President of the Council.

Since taking up his post in Geneva in 2008, Ambassador Bari has helped translate the work of the Human Rights Council into real results on the ground. Only last week, the Council established an Independent Expert on Albinism, an issue that Ambassador Bari was deeply committed to and fought hard for over the past years in close cooperation with civil society.

“Ambassador Bari’s tireless efforts with regard to the human rights situation in his own country were exemplary regarding him as a true advocate for his people and his country”, Ambassador Ruecker added.

On behalf of the United Nations Human Rights Council, the President of the Council expressed to Ambassador Bari’s family and friends, as well as the people of Somalia, the Council’s most sincere condolences.