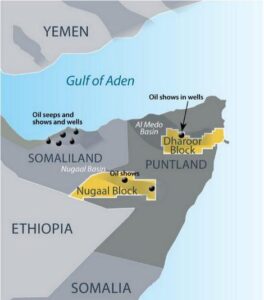 m and Mineral Agency “will not accept the legitimacy of an attempt to erode the sovereignty of Somalia,” Isse Mohamed Farah, the body’s director, said in an e-mailed response to questions. “It is wrong for the UN to impose a moratorium on a nation that is now out of civil war and ready to develop politically and economically.”

A UN Monitoring Group report on Somalia, to be released in mid-October, will repeat a recommendation first made in 2013 that the Security Council ban any oil deals in Somalia. The group argues that the country lacks a legal and regulatory framework to oversee the exploitation of energy resources.

Somalia hasn’t had a functioning central government for the past quarter century as it’s been wracked by civil war and an insurgency by al-Qaeda-backed Islamist militants. The African Union has deployed about 22,000 peacekeepers to help government forces stabilize the country. Gains against the insurgents since August 2011 have enabled the government to begin exerting its authority over southern and central areas.

“Instead of imposing an unfair and unwanted moratorium they should support us so we can deal with the international oil companies fairly, transparently and adequately,” Farah said.

Puntland’s constitution allows the regional government to manage and regulate oil, gas and minerals issues, while Somali’s federal government can’t legislate on the industry, according to Farah. “Attempts are under way to harmonize the two,” he said, without elaborating.