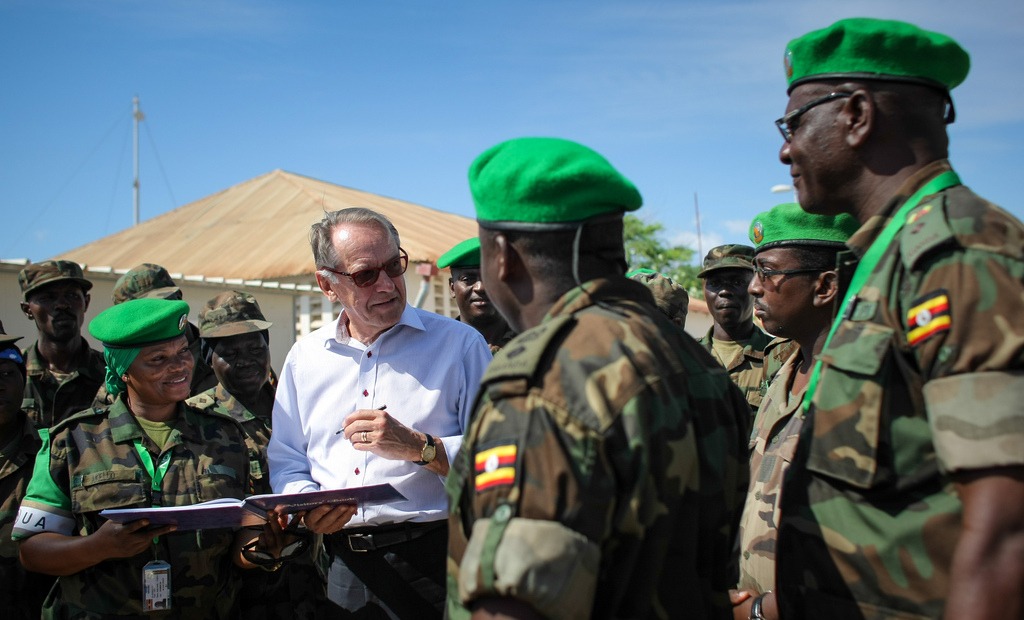 Share on Facebook
Tweet on Twitter
Djibouti (HAN) May 1st, 2014. According to security correspondence in Mogadishu, who monitors intelligence sources of Southern Somalia, confidence has emerged to invest and do business in Somalia . The report released in New York,   the United Nation’s Special Representative for Somalia, Nicolas Kay also supported those assessments.
Despite political turmoil and the threat of attacks by Somalia’s Al-Shabab armed group, the United Nation’s Special Representative for Somalia, Nicolas Kay described the security situation through  AlJazeera English TV,  concrete improvements have created  to insure confidence in Somalia’s future.
To support that notion, , Somali American community leader said, UN envoy’s assessment is correct, however, despite AMISOM-led gains for the past two month, the resistance endures and it is not realistic to think that it can only be eradicated by militarily. Military solution does not provide the political resolution that peace will require. Somalia people need peace and it is the interest of international community to help Somalia reach negotiated political settlement that ends the conflict once and for all. May Allah unite our people.
Nicholas Kay warned that Al-shabaab militants and its affiliates groups has become weaker, but more dangerous could emerge  in Somalia, which is a  threat to its neighbors; Ethiopia, Kenya and Djibouti. But, according to the Somali security expert, Al-shabaab were always been a weaker compare to 20 thousands Amisom soldiers, 70,000 Ethiopian forces, and 10 thousands Somali National Army (SNA).
According to a young Somali Student in Mogadishu, he said I think  living in such tough times with extreme situation in Somalia, where there are terrorists  slaughtering  people every day and night, so it is a better idea to speak out for our rights and then die terribly. The government are not taking any security action. The army was not trained to take any series military action to minimize Al-Shabaab Threats.
A Somali-British Schooler in london told Geeska Afrika Online that, Somalia is the country where I was born, and I am a patriotic citizen of Somalia, and I love Somalia and England, and I want to be sincere to my both countries. And I believe truly hopeful that I will go back to Mogadishu, because I want to fight against Al-shabaab terror tactics in Somalia. I want to fight for those children who are deprived of education, basic lifes and stability. And I have chosen politics, because through politics, I can serve the whole country. So I am hopeful, and I think if I empower myself with education, if I get knowledge, then it would be much more easier for me to get success in my cause to see Somalia with no terror and Al-Shabaab.
Al-shabaab assassination threats can’t weaken Amisom and Somali national army strategy against militant groups, according to the Somali national Army General Elmi (indhaqarsho).
The latest updates Fellow twitter.com/GeskaAfrika
Geeska Afrika Online (1985 -2014) – The International Gateway news and views about the Horn of Africa (Ethiopia, Eritrea, Somalia, Somaliland, Sudan, South Sudan, Djibouti, Kenya and Uganda), the best IGAD news and information Online Site for the last 20 Years.
–
HAN & Geeska Afrika Online (1985-2014), the oldest free independent Free Press in the region, brings together top journalists from across the Horn of Africa. Including Ethiopia, Somalia, Eritrea, Sudan, Djibouti, South Sudan, Uganda, Kenya, Oromo, Amhara, Somali, Afar and Harari. Plus, we have daily translations from 150 major news organizations in the Middle East and East African regions. Contact at news@geeskaafrika.com