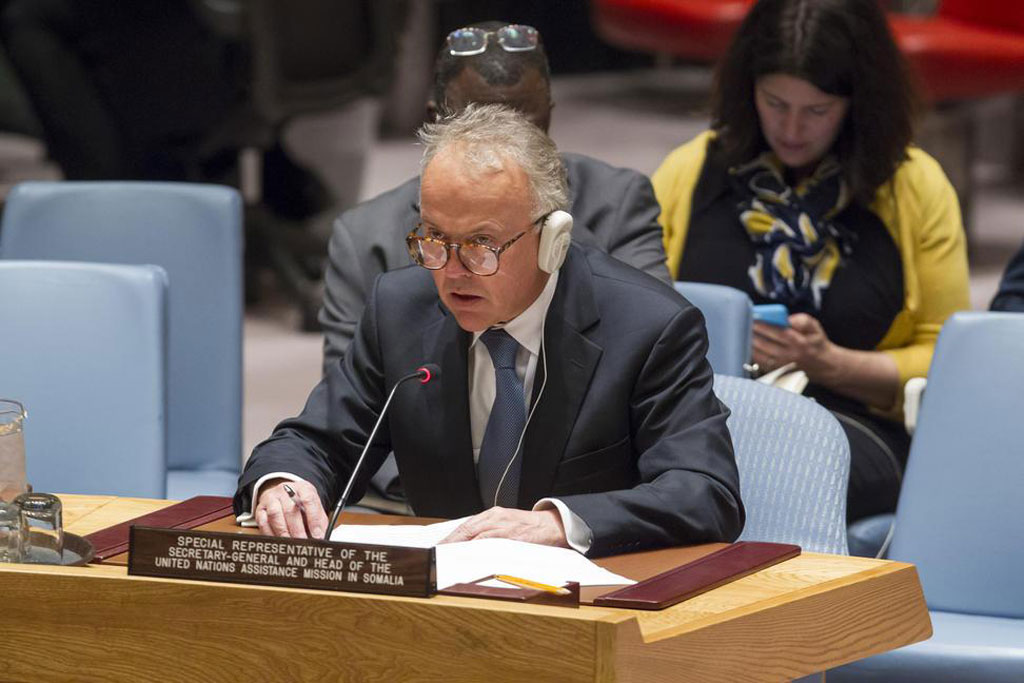 NEW YORK (HAN) April 19, 2016. Public Diplomacy & Regional Security News. The Security Council heard today from the top United Nations official in Somalia that political progress is being made in the country, but that much remains to be done in a short period, including completing the electoral process for 2016 and boosting support to the African Union Mission to Somalia (AMISOM).

“The progress is real but reversible,” Michael Keating, the Special Representative of the Secretary-General and Head of the UN Assistance Mission in Somalia (UNSOM), told the 15-member body during an update on the situation in the country.

The Special Representative highlighted that this past week, Somali leaders from all Federal member states and interim regional administrations reached agreement on the electoral model to be used later this year.

“This significant achievement paves the way for practical planning,” he said, noting that “much remains to be done in a very short period.”

Mr. Keating said that the electoral process envisaged for 2016 will be significantly different from 2012, as the electoral college will be “a hundred times larger” and there will be a “genuine choice” of candidates.

Voting will take place not just in the capital, Mogadishu, but in each of the capitals or seats of government of the existing and emerging Federal states. A two-tier structure comprising federal and state-level representatives will implement the process.

In addition, Mr. Keating highlighted that 30 per cent of the seats in Parliament are being reserved for women, an “admirable commitment” that he said in practice will not be easy in a clan-based model, but could mark a “major milestone” in making women’s political empowerment and leadership a reality.

He said that once the cabinet has formalized the National Leadership Forum decision, it will go to the Federal Parliament.

“We call upon it to expedite endorsement of the model to allow timely implementation,” Mr. Keating said. “I welcome the continued commitment by Somali leaders, in line with this Council’s expectations, that there will be no extension of constitutionally mandated term limits.”

Calling the 2016 electoral model “literally unique, a once-off,” the Special Representative said it is a midway point between the election of 2012, when only 135 electors selected 275 Members of Parliament and 2020, when “all Somalis will have a say.”

“Work is now under way to that end,” he stressed.

As for the “many outstanding issues” in the country, the Special Representative said that the state formation process in Hiraan and Middle Shabelle has encountered difficulties and delays.

“The international community is eager to support an inclusive agreement reached among clan leaders in both regions,” he said.

A wide view of the Security Council meeting on the situation in Somalia. UN Photo/Loey Felipe

Expressing hope that the formation of the next state administration will take place soon, Mr. Keating said that this will set the stage for agreeing on the status of the Federal capital.

In addition, he said that the technical review of Somalia’s Provisional Federal Constitution has advanced, and that “politically contentious issues” are scheduled to be discussed at the next Leadership Forum meeting in May.

“This activity amounts to a historic opportunity for all Somalis to contribute to shaping the political and legal foundations of their country,” Mr. Keating said.

“Some major issue may only be addressed after the electoral process. But already there has been significant progress. The rule of law and its centrepiece, the Federal constitution, will be the strongest guarantee of long-term stability and democracy in Somalia,” he added.

Progress, however, is taking place “amid great insecurity,” the Special Representative stressed, another reason why progress is reversible.

Moreover, he said that Al Shabab remains a potential threat, and an incursion into the coastal area of Puntland in mid-March highlighted the vulnerability of the north. Although facing significant casualties, Al Shabab continues to carry out repeated asymmetric and conventional attacks.

Paying tribute to the bravery of AMISOM and its troops, and to the courage of the Somali security forces and people in confronting Al Shabab, Mr. Keating also emphasized that “they need and deserve our continued support.”

“The trilateral partnership – between the Federal Government, the African Union and the UN – remains a cornerstone of the peace- and state-building endeavour in Somalia,” he said.

The country’s security and prosperity depend on success in reversing dependency on aid and in addressing the root causes of fragility, conflict and violent extremism, Mr. Keating said. A comprehensive political strategy is also required, embracing economic investment in the drivers of growth, job creation, education, the rule of law and respect for human rights, as well as in capable security and counter-terrorism forces.

“This is a formidable agenda,” he said. “It requires commitment both by Somalia’s political and traditional leaders, as well as concerted support from its neighbours and international partners.

It also requires addressing short-term realities, such as drought and acute food insecurity, Mr. Keating said. While donors are responding with assistance, “much more” is needed, he stressed.