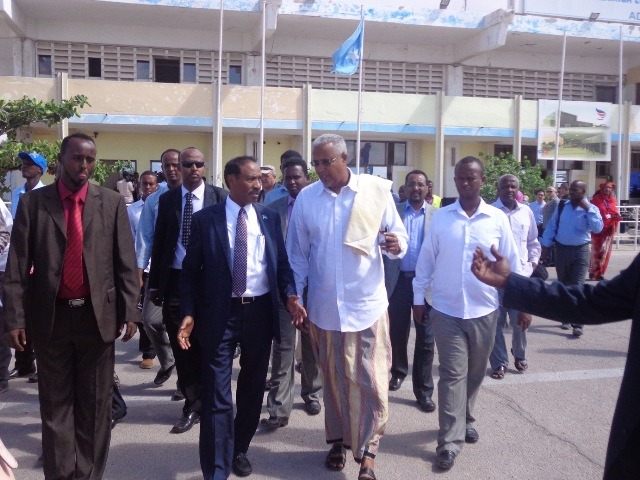 Djibouti (HAN) nApril 25, 2015 – According to the Somalia Government spokesman, Ministerial Delegation led by Foreign Minister Abdirahman Dualeh Bayleh left Mogadishu to the capital Tunis in Tunisia after the official invitation received  from the African Development Bank and the new government of Tunisia.

The official Somali delegation including the Minister of Finance HE Hussein Abdi Halane and other members of the set during their stay in Tunisia to meet with HE Donald Kaberuka President of the African Development Bank, some of the heads of various departments of the bank, the Minister of Foreign Affairs Tunisia HE Mongi Hamdi, Minister of Economy and Finance HE Hakim Ben Hammouda and other officials.

Foreign Minister  Dr. Abdirahman Dualeh Abdirahman Beileh during a press conference held in Mogadishu International Airport before leaving him said that the leadership of the African Development Bank will discuss the facilitation of financial support in the country of Somalia, with some Government ministers of Tunisia and will present a new proposal to develop relations between the two countries, and taking part in economic growth and investment.

Dr. Abdirahman Dualeh Abdirahman Beileh mentioned that their country will go to Tunisia after the country’s unions and the United Arab Emirates to attend a conference on investment.

Foreign Minister Dr. Abdirahman Dualeh Abdirahman Beileh has indicated that they will meet the  Foreign Minister Sheikh Abdullah bin Zayed Al Nahyan and other ministers, and will discuss the implementation of development projects of reconstruction and investment in standards.