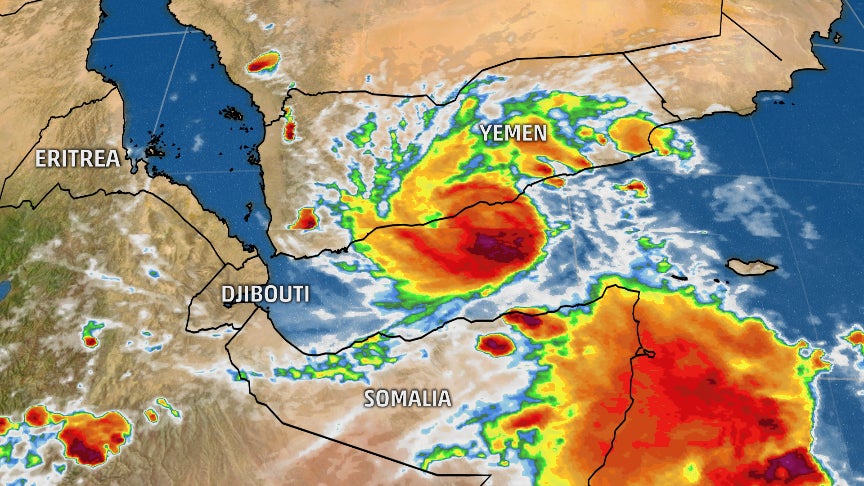 Share on Facebook
Tweet on Twitter
Bosaso (HAN)  November 24, 2020. The Very Severe Cyclonic Storm Trucker updates. Gati is the first hurricane-strength system to hit Somalia in recorded history.
The strongest tropical cyclone ever measured in the northern Indian Ocean (Somalia and yemen)  has made landfall in Northern Somalia regions, where it is poised to drop two years’ worth of rain in the next two days. Tropical Cyclone Gati made landfall in Somalia on Sunday with sustained winds of around 105 mph. It’s the first recorded instance of a hurricane-strength system hitting the country.
At one point before landfall, Gati’s winds were measured at 115 mph. “Gati is the strongest tropical cyclone that has been recorded in this region of the globe; further south than any category 3-equivalent cyclone in the North Indian Ocean,” said Sam Lillo, a researcher with the National Oceanic and Atmospheric Administration’s Physical Sciences Laboratory. Its intensification from about 40 mph to 115 mph was “the largest 12-hour increase on record for a tropical cyclone in the Indian Ocean,” Lillo added.

One reason Gati intensified so quickly is because the size of the cyclone itself is quite small, Lillo said.

The warm water in the area coupled with low wind shear also contributed to the rapid strengthening, Accuweather reported. “With climate change we’re seeing warmer ocean temperatures and a more moist atmosphere that’s leading to a greater chance of rapid intensification for tropical cyclones like Gati,” meteorologist and climate journalist Eric Holthaus told NPR. “Gati’s strength is part of that broader global pattern of stronger storms.” And those storms are leading to a lot more rain.

Northern Somalia usually gets about 4 inches of rain per year; data from the National Oceanic and Atmospheric Administration show Gati could bring 8 inches over the next two days — “two years worth of rainfall in just two days,” Holthaus said. Some isolated areas could see even more than that. “The system may impact Socotra, Somalia, Yemen and western Oman from [Sunday] night into Monday and potentially Tuesday, with the main threat being heavy rain and flash flooding,” AccuWeather’s lead international meteorologist, Jason Nicholls, told the site.

The Somali Broadcasting SBC TV reported eight people had died in the storm, including five fishermen from Yemen, which lies across the Gulf of Aden. Authorities fear the toll could rise, the station reported. Nine people were injured, according to the Somali National News Agency.