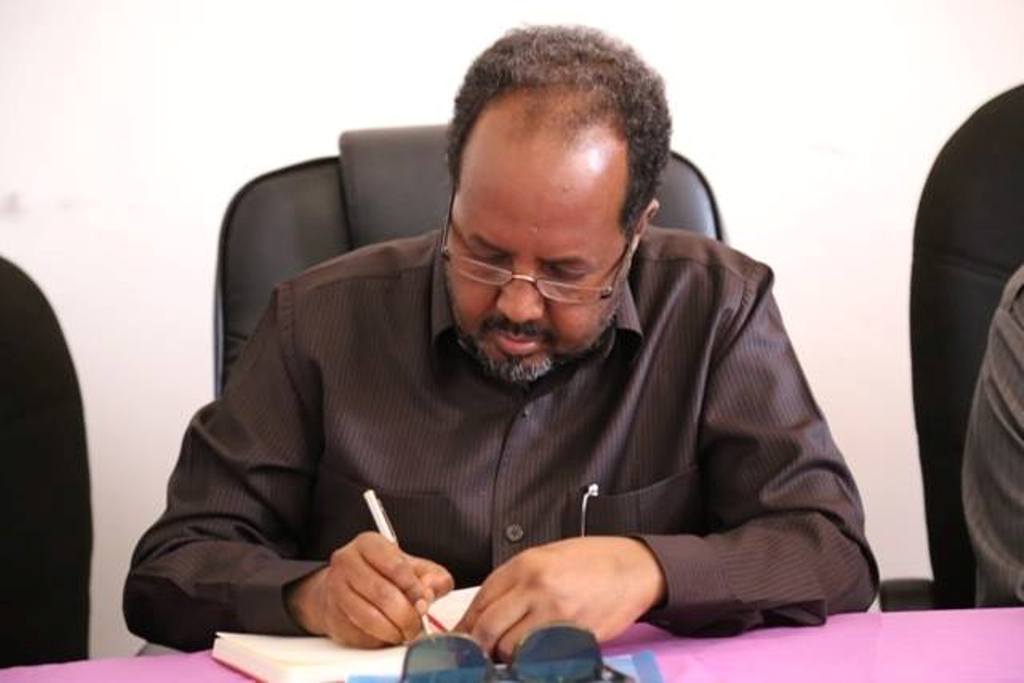 New York (HAN) January 9.2017 Public Diplomacy & Regional Security News. The international donors for Somali security sector reform (SSR) will gather in London next May for the High Level Security Sector Reform meeting, where they are intending to trumpet security achievements made in the last four years and reinforce momentum for the federal government of Somalia’s Vision 2016-2020 agenda– which includes the formation of strong Federal National Security Forces and adoption of the 2016 draft security reforms, and establishment of stable and strong federal security system to contain terror threats and maritime illegal activities in Somali waters.

Farah Sheikh Abdulkadir is unifier of Coalition Crisis within the members of the parliament and competing visions of Somali democracy, which federal member states are comfortable to work with him within the next four years, for their development issues and reforming their security status.

Farah, therefore, is most likely to try to ride the political wave by positioning himself as a potential unifier who can bridge the gap between the Reform Front in the Federal House of Parliament and other the blocs.  A gap that he has helped create and maintained since 2012.

According to the analysis written by the Somali Institute of Security and Diplomacy (SIRAD), President Hassan Sheikh has taken a robust interpretation of his mandate since 2012, which international partners and community (donors) have tended to countenance. Seeing in his civil society background, a four year presidential leadership status, empowered him to be a potential partner with whom they could work with and who would mark a significant departure from the domination of politics by former warlords, spoilers and criminals.

Opinion written BY: Abdullahi H. Hassan. Abdullahi H. Hassan wrote 214 the following:  In any government, there will be those who some would consider powerful , weak , noticeable ministers,uijkhbn9 and those who carry the title of a minister in their suits. What matters more than anything to the people Somalia should be what ministers in government  accomplish during their term and the legacy they leave behind for their country. One particular Minister some in the Somali media have been paying quite a bit of attention to is Farah Sheikh Abdulkadir, Minister of Justice and Constitutional Affairs.  Let me clear the record, I don’t have any personal affiliation with Farah Sheikh Abdulkadir nor do I know him in person. I’m a concerned Somali Citizen who decided to challenge the status quota of Somali politics. One thing  that compelled me to write about this mysterious man that is everyone talks about him, more so than any other MP or Minster in the current Somali Government.

Farah Sheikh Abdulkadir belongs to a minority clan in Somalia call Reer Ow Hassan, this particular clan is a member of the so called “Other Tribes” also nick named “0.5” (meaning their representation is not equal to other powerful clans when it comes to power sharing in government). The “Other Tribes” are not entitled to key positions in government, such as President, Prime  Minster, or the speaker of Parliament and important ministerial positions. Since Somalia gained its independence, there has not been a single President or Prime Minister  originating from an “other tribe”. In addition to the above, Farah Sheikh Abdulkadir also happens to be a close ally of President Hassan Sheikh Mohamud.

The above two are the only crimes Farah Sheikh Abdulkadir committed, for the sake of argument we would consider them as “crimes” for now.  Farah’s tribe-of-origin and his relationship with President Hassan Sheikh Mohamud make him a soft target for many, including the media and Prime Minister when it came to reshuffling his government. This was clearly demonstrated in Prime Minister Abdiwali Sheikh Ahmed’s recent government “targeted reshuffle;” where Farah was once again the victim of “soft target.”

Let’s face it, targeting the Ally of a President who is not be a very popular would generate popular support from the President’s opposition and those who have clan association with the Prime Minister. Furthermore, targeting a Minister  who belongs to minority clan would not breed much opposition from MPs or the public. The Prime Minister executed a well thought-out and well planned mission to eliminated the last ally of his President, the man who hired him for his current job as Prime Minister, less than a year ago. Certainly, this is not what any President would expect or accept; time will tell whether this backfires not.

Some would argue that the Prime Minister could have been more modish with his reshuffling process, rather than targeting only Farah Sheikh Abdulkadir, and do a complete reshuffle. He was the only Minister whose position was swapped with another Minister. The PM wouldn’t dare to move or replace any Ministers from the more powerful clans. Prime Minister Abdiwali Sheikh Ahmed knows too well that targeting particular ministers from powerful clans would have met furious opposition from their respective MP’s in the Parliament,  perhaps Farah may be the lone MP from his minority clan in parliament. As part of the reshuffle, Justice Minister Farah Sheikh Abdulkadir, a close ally of President Mohamud, had been reassigned as Minister for livestock.

What is even more interesting is that the two ministers who were swapped, both have expertise in their prior ministries from where they were removed. Farah has a law background and was moved from Justice to Live Stock, whereas Minister Salim Aliyow Ibrow whose background is veterinary, was moved from Live Stock to Justice. Prime Minister Abdiwali Sheikh Ahmed considers this shuffle “moving forward” for the 2016 vision. It’s worth noting both Salim and Farah have brought much to their perspective ministries and are capable to leading any Minister. The next  question is the timing of the appointment.

During the civil war,  people like Farah were nicked named “looma ooyaan” because of their clan background, meaning a victim that no one will mourn or fight against their victimization. It begs the question, if Farah was a member of one of the powerful clans that have dominated Somali politics since the last central government led by Mohamed Siyad Barre was overthrown, would his story have been different. Without a doubt, he would have been a hero to many and not “a soft target” for anyone.

It’s worth noting, many ministries in current and previous Somali Governments were appointed solely for the purpose of clan representation, rather than competence and qualification. I don’t doubt many in the Somali Government have the qualification to execute their duty with due diligence. However, in today’s Somalia before that qualification is taken into consideration, their clan background must be one that is satisfactory, this makes competence a secondary objective.

Somalia has had ministers who were warlords and who had committed heinous crimes during the civil war, yet there was very little negative stereotypes compared to the media’s staggering, barbaric, and baseless attacks against Farah Sheikh Abdulkadir, a man who has done so much for Somalia and has so much more to offer. I’m surprise many Somali Intellectuals have not come forward in his defense to state the facts. If this continues, anyone who is capable of contributing to the well-being of Somalia but who belongs to a minority clan will think twice before stepping up to the plate. I would highly encourage anyone who wants to know about Farah Sheikh Abdulkadir to research his legacy before joining politics and his accomplishment while in government.

I spent months searching for anything negative this man has ever said or done towards anyone and against anyone. I dare anyone to find anything negative about this man other than the baseless and fabricated stories that have no evidence that perpetuated by some media who employ an  attitude of suppressing minority individuals who have a lot offer the country many of us claim to love dearly but work hard to destroy it in the end. Listen and pay attention to Farah, when he speaks, he speaks with words of wisdom and speaks about his vision for Somalia post 2016. Those who know him well describe him as “a man with action”. He acts far more than he speaks.

Farah was the head of African Muslim Agency in Somalia since the 1990’s. Under Farah’s leadership, AMA opened dozens of schools across Somalia educating thousands of Somalia. I have met many who benefited from his leadership in the education sector, who are now educators themselves.

Farah’s contribution and accomplishments since joining the Federal Government of Somalia.

Farah played crucial role in Somalia’s central government agreement and recognition of former Islamist commander as the interim leader of the southern Juba region, a deal that put an end to months of clan disputes over control of the region and the port city of Kismayo. The pact was signed in Ethiopia’s capital in August 2013. Diplomats within and without Somalia welcomed this deal which was seen as blueprint for power sharing that other regional government can use in the event of a disputes. Nicolas Kay, the U.N. special representative for Somalia, called it “a significant step towards restoring peace in Somalia, building a strong Federal Somalia and contributing to regional and international security”. The  agreement included the integration of Jubaland’s military forces under the central command of the Somali National Army.

UN Convention on the Rights of the Child.

Another milestone accomplished by the Federal Government of Somalia, under the leadership of Farah Sheikh Abdulkadir, Minister of Justice and Constitutional Affairs, is adoption of the UN Convention on the right of children. On September 25, 2014, The Federal Government of Somalia has officially proclaimed in the Charter of the United Nations, recognition of the inherent dignity and of the equal and inalienable rights of all members of the human family is the foundation of freedom, justice, and peace in the world. This legislation provides children protection under the law in Somalia. We should all be proud as Somalis and be thankful to those who brought this proclamation into law.

All the above and more makes Farah Abdulkadir one of the most accomplished and action oriented Minister in Somali Government.