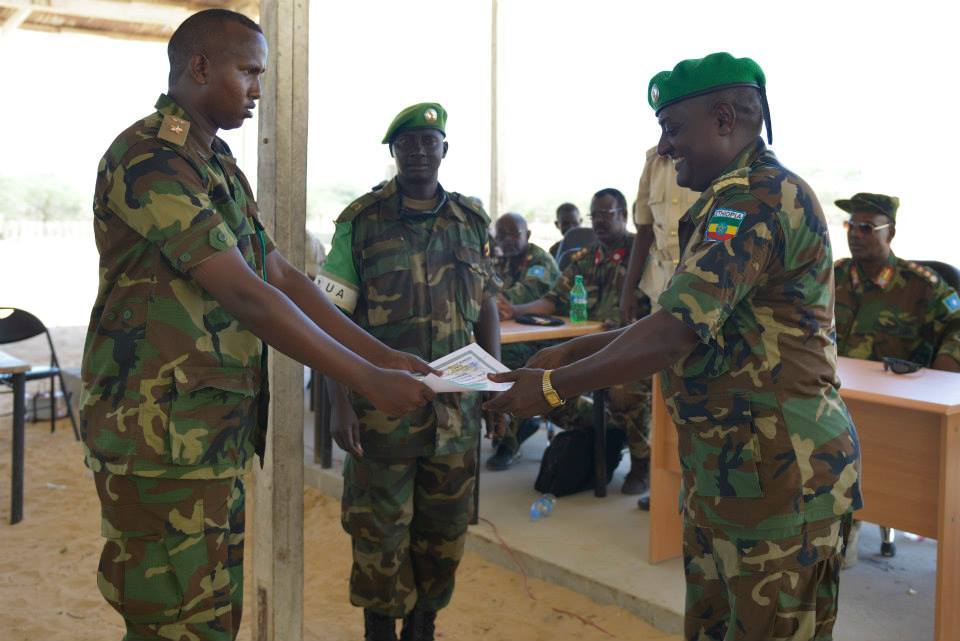 Addis Ababa (HAN) April 18, 2014 – This week the view Security section &  Opinion By the Ministry of Foreign Affairs of Ethiopia – Somali Federal Government Prime Minister, Abdiweli Sheikh Ahmed, arrived in Kismayo, the capital of the Jubba Interim Administration, on Saturday, April 11 for a three day visit. He was heading a high-level delegation of ministers and members of Parliament, and was welcomed by the head of the Jubba Interim Administration, Ahmed Mohamed Islam ‘Madobe’, and other high-ranking officials. During his visit, the Prime Minister highlighted the importance of encouraging on-going efforts to stabilize the region and promised that the Federal Government would oversee the preservation of peace in all areas. He held meetings with AMISOM officials to discuss enhancing security and toured facilities including schools, hospitals, the port, and other public structures, promising federal government assistance to the Kismayo General Hospital, and authorizing the Federal Ministry of Interior Affairs to provide immediate food aid to newly liberated areas in the region. He also visited the recently rehabilitated facilities of the Ministry of Interior and the Central Bank of the Jubba Administration and pledged to assist efforts to rehabilitate the port. 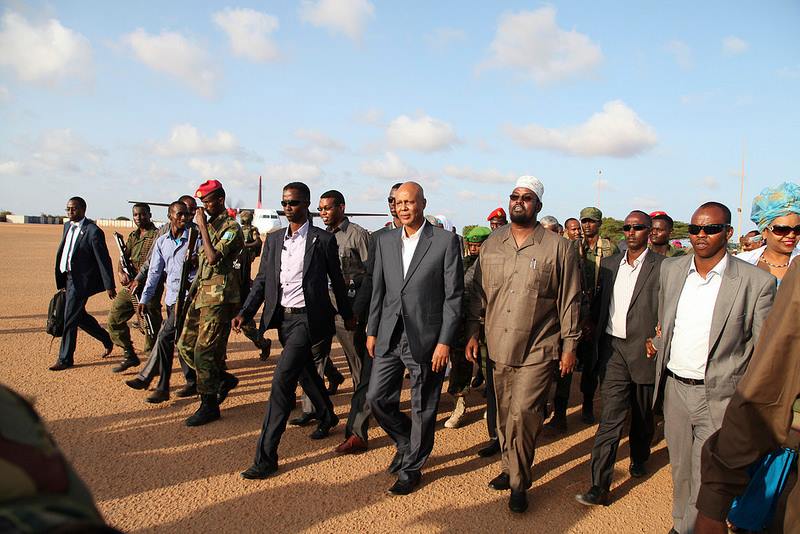 The discussions with Ahmed ‘Madobe’ centered on the need to implement the Addis Ababa Agreement within the agreed timescale. The Prime Minister said all parties should build on the Addis Ababa Agreement and he expressed commitment to the agreement’s full implementation.  Together with Ahmed Madobe and his deputy, Abdullah Faratag, he also met with elders of the Gedo region to discuss strengthening security and their co-operation with the Jubba Interim Administration.

The Prime Minister’s visit underlined the Federal Government’s commitment to the success of the agreement, mediated by IGAD in August last year in Addis Ababa, between the Jubba Interim Administration and the Somalia Federal Government. That essentially allowed (pending an agreed “constitutional process”) for the Jubba Interim Administration of Gedo, Middle Juba, and Lower Juba to eventually become a Federal Member State of Jubaland. The Prime Minister’s visit and his reassurance of the Federal Government views was timely as the conclusion of the two opposed state conferences in Baidoa, the capital of Bay region, addressing the formation of a proposed Southwest federal state, had raised concerns in Kismayo about the future of the Addis Ababa Agreement and the Jubba Interim Administration.

The two competing conferences led by various Digil/Mirifle (Rahenweyne) clan leaders have been taking place in Baidoa for a number of months. The first conference, deliberately ignoring last year’s creation of the Jubba Interim Administration, aimed at the creation of a six region Southwest state comprising the regions of Bay, Bakool, Lower Shebelle, Gedo and Middle and Lower Jubba (SW6).  The second conference, accepting the existence of the Jubba Interim Administration, supported the idea of a three region Southwest state of Bay, Bakool and Lower Shebelle (SW3).

The SW6 process was launched in December 2012 and in January this year 781 out of 789 delegates approved a constitution providing for a two house parliament of which an Upper house or guurti would be made up of 73 elders. At the beginning of March, delegates elected Madobe Nunow Mohamed (Digil/Merifle) as their president. A few weeks later, the SW3 conference of over 700 delegates also agreed a constitution and elected Mohamed Haji Abdinur as president. With tension rising in Baidoa between the two groups, Federal President Mohamud arrived in Baidoa, supported by a large delegation including cabinet ministers and parliamentarians from the area as well as government officials and military commanders, to try to resolve the situation and persuade people to accept the Federal Government’s view of the way forward.  Originally, the Federal Government appeared to endorse a six region state, but after the agreement on the Jubba Interim Administration last August, the Government made it clear it preferred to see a three region state of Bay, Bakool and Lower Shebelle. The President was greeted with protests from SW6 supporters, with banners reading; “Federal Government shouldn’t meddle in our affairs,” and “Our own aspirations will determine the future.” Supporters of the three region state also held a rally in support of their option and of the Jubba Interim Agreement.

Support for this option also came from the Puntland State Government which has strongly backed the creation of the Jubba Interim Administration, both being largely Darod clan structures. Puntland promptly congratulated Mohamed Haji Abdinur on his election as president and a press statement from Puntland State House said the “Puntland Government conveys warm congratulations to southwest state of Somalia’s people on their role in crowning an autonomous state.” The statement said the Puntland Government fully supported the formation and the development of the southwest state of Somalia, adding that Puntland was ready to provide technical and experience support to the new federal state. The Puntland authorities urged the Federal Government of Somalia to speed up the federalization process.

The Special Representative of the Secretary General and head of the UN Somali Office, Nicholas Kay also made clear UNSOM’s support, noting it would “continue to support the Federal Government of Somalia’s consultations with political and traditional leaders in Baidoa”. Mr. Kay had underlined this when addressing the AU Peace and Security Council last month. He called on all parties “to work constructively with the Government to find a peaceful and inclusive solution and avoid any actions that could pose a security threat or undermine stability. He said UNSOM would continue to work closely with international partners, particularly AMISOM and IGAD to foster reconciliation and state formation processes under the leadership of the Federal Government.”

The SW6 process runs counter to other state formation processes, most obviously the SW3 conference in Baidoa and the discussions last year producing agreement over the Juba Interim Administration for Gedo, Middle and Lower Juba regions.  The issue is also complicated by the fact that leading regional Rahenweyne politicians are by no means in agreement. There is general support for inclusive, but there are also fears that some of the activities are exacerbated by former warlords and frustrated politicians.

One of the problems with the formation of federal states is that there is still considerable constitutional ambiguity and lack of consensus about the federalism process, within regions as well as between the regions and the central government. There is a need to create a consensus around the meaning of federalism or how it should be implemented in accordance with realities on the ground. While the Federal Government has prepared a concept paper outlining a hypothetical seven federal states, there is a need to make progress on the issue of federal states.

The draft constitution makes clear (Article 48) that all regions have to merge to form states while Article 49 specifies that the number and boundaries of the Federal States shall be determined by Parliament and that these boundaries should be based on the boundaries of the administrative regions as they existed before 1991. The article states (49.6) that “Based on a voluntary decision, two or more regions may merge to form a Federal Member State.”

In September last year, President Mohamud convened the Vision 2016 Conference to outline the steps needed to strengthen and rebuild government institutions and prepare for elections in 2016. Over 200 delegates attended to consider the main themes for the future: constitutional development and its review, oversight and implementation; models of federalism; good governance and reform; electoral process and party politics; and political outreach, public engagement, reconciliation and justice. Among other things the Conference recommended parliament to form a Boundaries and Federation Commission within 60 days, as well as a Truth and Reconciliation Commission and a Land and Property Commission. It hasn’t done so, though in an interview this month, the Deputy Chair of the parliamentary National Security and Internal Affairs Committee said that the national Boundaries and Federation Commission has been set up. However, Parliament has yet to enact any legal basis for its responsibilities.

In fact, regardless of these problems and the reluctance of some to accept it originally, federalism in Somalia today has essentially become operative though much is effort is needed in implementing the necessary legal elements.