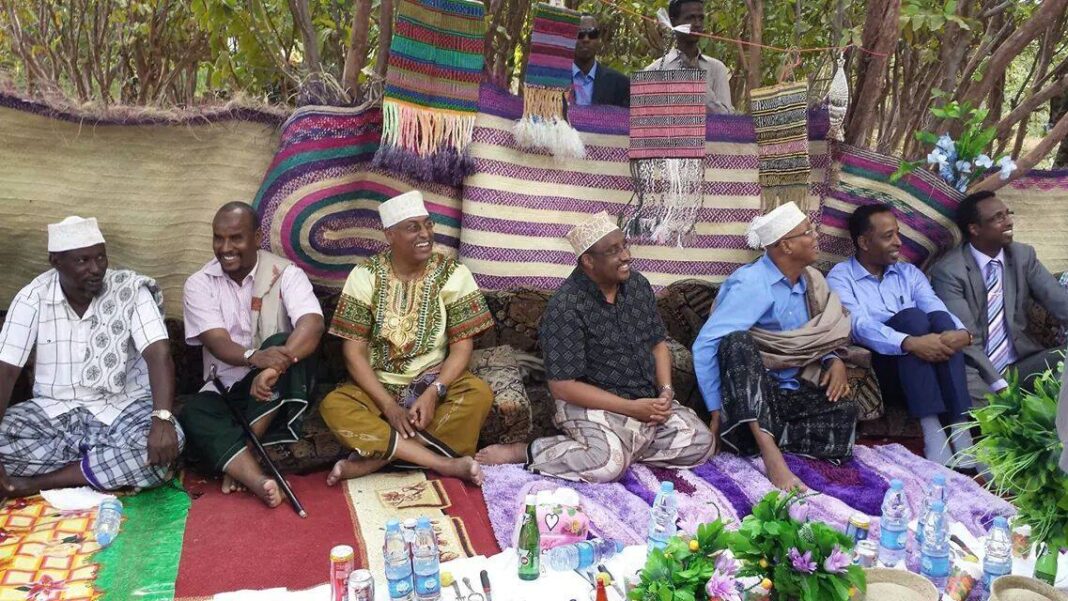 Mogadishu (HAN) October 12, 2014. Public Diplomacy and National security news.In Mogadishu, Unknown Gunmen shot and seriously wounded a Somali journalist working for a London-based television channel in an attack outside his home in Mogadishu on Sunday, colleagues said. Abdirisak Jama, Mogadishu bureau chief for Somali Channel Television, received several bullets to the stomach in the attack carried out around noon by unknown assailants.

“The gunmen escaped the scene after shooting the journalist and he was rushed to hospital for medical care,” said his colleague Mohamed Ali. “He is in serious situation,” he added.

A Mini bus bomb exploded outside a popular cafe in Somalia’s capital, killing 11 people and wounding eight others, a senior police official said.
The blast struck the Aroma cafe in Mogadishu and the bomb was believed to have been detonated by remote control, senior police official Mohammed Hussein said. Most of those who died were sitting outside the cafe.

The Amisom forces and Somali soldiers are continuing to drive back the Islamist militia Al-Shabaab. Nevertheless, a durable peace is still not in sight in this country torn apart by decades of civil war.

An assassination bid has failed to hinder a visit by Somalia’s President Hassan Mohamud to Barawe.

An aircraft carrying the president and several ministers landed safely in Barawe despite a mortar barrage launched by suspected militants. An al-Shabab spokesman said the president had “narrowly escaped.”

The forces of the African Union Mission in Somalia (AMISOM) are reporting one success after the other.  The commanders announced that Kenyan and Somali government soldiers had “liberated” the southern Somali city of Bula-Gaduud. Only four days earlier, they had taken the port city of Barawe, thereby depriving the Islamist militia Al-Shabaab of its last base on the coast.

Al-Shabaab militants, who only two years ago controlled a broad swathe of Somalia, have been retreating from more than 20,000 advancing AMISOM troops as well as Somali government soldiers, whom the German army is helping to train. In early September a US drone killed al-Shabab leader Ahmed Abdi Godane.

Al-Shabaab’s supply line cut off:  The recent setbacks may have dealt the militia a decisive blow, the Somali journalist and analyst Mohamed Omar told DW. Although al-Shabab still had other places of refuge in the interior of the country, the loss of Barawe deprived the militants of their most important source of revenue, Omar explained.

The city was a commercial hub which brought the Islamists considerable tax revenue. The export of locally produced charcoal via Barawe’s small port was deemed to be an especially lucrative source of income. Moreover, al-Shabab used the port to obtain arms, ammunition and food.
Situation improves for civilian population: According to Omar, the civilian population welcomes the soldiers’ advance, because the Islamist militia imposed a very strict and therefore unpopular religious regime on the areas under its control.

For the population, the situation had improved noticeably, the German-Somali political scientist and author Abdirizak Sheikh confirmed. This was particularly true for the capital, Mogadishu.

“But the security situation remains precarious,” he warned. The military victories against al-Shabab, Sheikh said, glossed over the fact that the violence in Somalia was not simply going to disappear along with the Islamist organization.

This was because al-Shabab did not consist of foreign jihadists, but of members of various domestic clans. These clans, which included some very powerful families, make up the basic structure of Somali society.

Even if al-Shabab was to fall apart as an organization, the clans would by no means lay down their arms, Sheikh stressed. Instead, they would continue to use force to fight for their particular interests. “As long as the large clans are not disarmed, there will be no peace in Somalia,” he said.

German army involuntarily trains militiamen: Sheikh criticized that neither the Somali army nor foreign troops were currently disarming people. “These clans with their militias are even represented in the government and in parliament,” Sheikh said.

Therefore, the government was often not acting in the interest of all Somalis but in that of the large clans.

As evidence of the influence exerted by the heads of these clans, some of whom are allied to al-Shabab, Sheikh cites the case of Hassan Dahir Aweys. The former spiritual leader of al-Shabab was arrested over a year ago. But to this day, he is staying at a hotel in Mogadishu. His influential family is preventing him from being put on trial.

Without meaning to, Western supporters of Somali security forces were even arming various militias in the country, Sheikh said. The government was paying its soldiers very little, and irregularly, too. So many of the soldiers trained by the European training mission, EUTM, defected straight to their respective clan’s militia – and some to al-Shabab – taking all their freshly acquired skills with them. Maximilian Borowski DW and Geeska Afrika Online security reporter.