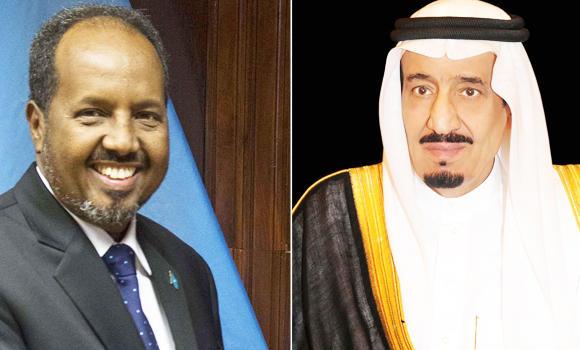 Mogadishu (HAN) October 26, 2015 – Public Diplomacy and Regional Security and stability Initiatives News. The Kingdom of Saudi Arabia  and the Somali President is to Discuss Ways To Defeat regional terrorism and cooperate an strategy to acheive stability and economic cooporation between Somalia and the Kingdom.

Somali President Hassan Sheikh Mohamud is to pay an official visit to the Kingdom of Saudi Arabia on Monday to discuss ways of solving political, economic and security related issues in the region with Custodian of the Two Holy Mosques King Salman.The two leaders will also explore avenues of fighting terrorism and strengthening mutual work across the Arab world.

The Somali ambassador to the Kingdom, Taher Mahmoud Jaili, told local media that this visit is very important, especially since it comes at a critical period in Arab history. He noted that the situation in the region today calls for greater consultation to strengthen Arab actions and face the challenges and external dangers that afflict the area. The visit is expected to further reinforce relations between the two countries across all fields.

The ambassador commended Saudi solidarity with the Somali people during the various crises they have faced in recent times.

“The visit will provide an opportunity to discuss emerging events in Yemen and will stress the efforts of the Arab alliance, led by the Kingdom of Saudi Arabia, to support legitimacy in Yemen against the Houthi rebel forces,” he added.

The Somali diplomat said that the country supports all of the Kingdom’s efforts to defeat the Houthis and Yemeni governmental legitimacy, in addition to its efforts to maintain the safety and security of Saudi borders.