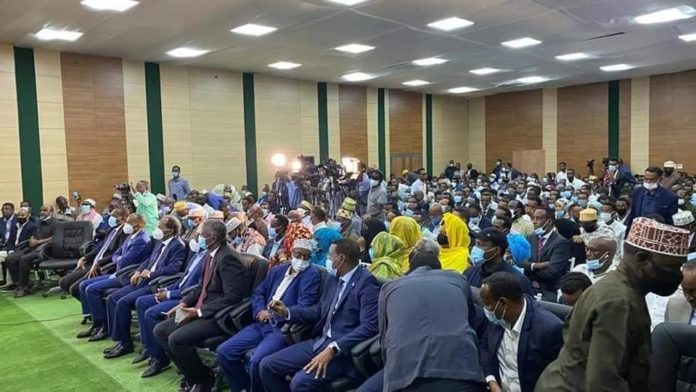 MOGADISHU (HAN) April 21. 2021. Public Diplomacy and Regional Stability Initiatives News. Monitoring Regional Issues. Representatives of an influential clan in Somalia call for the immediate renunciation of Federal Government’s term extension. The Power house has threaten to use any means to block it. Over 400 delegates of the Hawiye clan pass a resolution in Mogadishu rejecting Farmajo’s 2 year term extension. The international community has been pressing Somali leaders to resolve their differences and allow the country to hold elections.

Somalia’s lower house of parliament voted to extend the president’s mandate after months of deadlock over the holding of elections in the fragile nation. The following day, President Farmajo signed the two-year term extension legislation into law. But the move was condemned by the US and EU, calling Somali political stakeholders to end their difference at the negotiating table.
The term of the Federal Parliament ended on December 27, 2020 while that of the President lapsed on February 8, 2021 in line with the Provisional Constitution.

Hon. Mohamud Beenebeene “Extension is poison, it is a bombshell. The president whose term is over will not be allowed to extend his term by two years. He must go to the polls and not go to Congo. African Union cannot legitimize him”. “This fight will continue until Farmajo returns to the tent.”

“if that doesn’t happen in the country they will take the responsibility”.

Abdirahman Abdishakur speaking at the conference called on Mogadishu businessmen to stop paying taxes to federal government lead by farmago . He said the people of Mogadishu will overthrow Farmaajo if he reject to hold the election.