Home frontpage Somalia: The New Special Representative of AU and Head of AMISOM 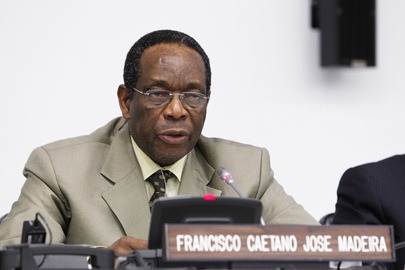 Addis Ababa (HAN) October 7, 2015 – AU Press Release: The Chairperson of the Commission of the African Union (AU), Dr. Nkosazana Dlamini-Zuma, today, appointed Ambassador Francisco Caetano Jose Madeira, of Mozambique, as her Special Representative for Somalia and Head of the AU Mission in Somalia (AMISOM), in replacement of Ambassador Maman Sambo Sidikou of Niger. Since 2010, Ambassador Madeira has been serving as the AU Special Representative for Counter-Terrorism Cooperation and Director of the Algiers-based African Centre on the Study and Research on Terrorism (ACSRT), a post he held concurrently with that of Special Envoy for the issue of the Lord’s Resistance Army (LRA), from November 2011 to July 2014.

Francisco Madeira served as Ambassador of Mozambique to several African countries, from 1984 to 1989, and diplomatic advisor at the presidency. He was a member of the Government delegation to the peace negotiations with RENAMO, which resulted in the signing of the August 1992 Rome General Peace Agreement for Mozambique. He held ministerial portfolios, having been, from 1995 to 1999, Minister in the President’s Office for Parliamentary Affairs and, from 2000 to 2010, Minister in the President’s Office for Diplomatic Affairs. He has contributed to several peace processes on the continent. In particular, he was the Special Representative of the Mozambican Government to the Great Lakes Region; member of former Presidents Julius Nyerere and Nelson Mandela facilitation teams in the Arusha Peace Negotiations on Burundi (1997 – 2000); Special Envoy of the AU Chairperson (former President Joachim Chissano of Mozambique) to Sao Tome and Principe, following the July 2003 coup d’Etat; member of the Southern Sudan facilitation team in the negotiations with the LRA; and OAU/AU Special Envoy for the Comoros (1999 to 2010). He has been member of the National Parliament of Mozambique from January 2005 to January 2010.

The appointment of the new Head of AMISOM comes at a time when the AU is attempting to expedite the stabilisation of Somalia, so as to pave the way for the successful holding of general elections in 2016. Given his experience in counter-terrorism, Ambassador Madeira is expected to give a new impetus to the campaign to neutralize al-Shabaab and other terrorist groups, building on the tremendous achievements made by AMISOM over the past few years, in particular with the recovery of many of the major cities and other strategic locations of south-central Somalia. He will also assist in the implementation of Vision 2016 developed by the Somali stakeholders.

In pursuit of his mandate, Ambassador Madeira will maintain a constant interaction with the Federal Government of Somalia (FGS) and other Somali stakeholders. He will also work closely with the Intergovernmental Authority on Development (IGAD) and its Member States, as well as with relevant bilateral and multilateral partners, including the United Nations (UN) and the UN Assistance Mission in Somalia (UNSOM), the European Union (EU), the United States of America and the United Kingdom (UK).

    The Chairperson of the Commission would like to express her sincere appreciation to Ambassador Sidikou for his leadership and commitment. Under his tenure, AMISOM, jointly with the Somali Security Forces, significantly expanded the territory under the control of the FGS, and played an important role in advancing the political process. She wishes him success in his future endeavours. The Chairperson of the Commission also thanks Ambassador Madeira for his work as Special Representative for Counter-Terrorism Cooperation and Director of the ACSRT, having greatly contributed to the formulation and implementation of the AU counter-terrorism framework.

Amassador Francisco Madeira was born on 4 April 1954, in Beira, Mozambique. He is a holder of a Diploma in International Relations at the Center for Foreign Relations in Dar-es-Salaam, Tanzania, and a Law Degree at the University of Eduardo Mondlane in Maputo, Mozambique.