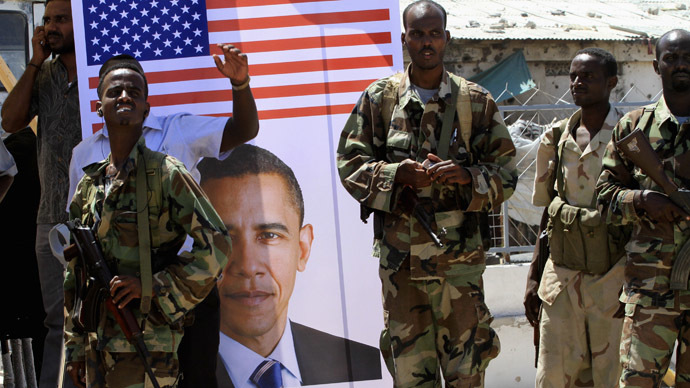 The United States recently revealed that it had used airstrikes in Somalia four times during May. All were described as necessary to protect American troops or AU peacekeepers operating in remote areas where al Shabaab was still active. The U.S. troops being protected are probably small groups of American Special Forces operators training and advising peacekeepers or Somali Army troops.

Having American UAVs overhead is common in Somalia and most of the time these unmanned aircraft are simply watching and reporting. This constant surveillance gives peacekeepers and local pro-government forces a big advantage in dealing with the evasive but persistent al Shabaab terrorists. This intel effort has also made it possible to get a sense of the scope of organized lawlessness in Somalia. The Americans won’t release numbers but the history of the region indicates that bandits and warlords have always been a widespread problem. This lawless atmosphere plays a large role in the persistence of massive corruption that makes economic growth difficult. It is also apparent (to most Somalis and knowledgeable outsiders) that a permanent solution has to come from within. That explains the U.S. effort to recruit and train a Somali special operations unit of some 500 troops. It takes years of training and combat experience for new recruits to achieve skills that make them exceptional (and not just better infantry or commandos in name only). Starting this year American Special Forces troops have been more frequently taking their most promising students out on carefully planned and rehearsed operations. That last known one took place in March but others are suspected and these raids get UAVs for surveillance and airstrikes on call because there are American troops down there with the Somali commandos.

Because of all this the number of American military personnel involved in Somalis is quite small. Currently there appear to be fewer than 200 Americans in Somalia, plus several hundred contractors (many of them Somali). Several air fields in the region support UAV and manned recon aircraft operations. The intel provided to the peacekeepers has played a large role in the success of operations against al Shabaab. These U.S. personnel are controlled by AFRICOM and supported by a large Franco-American special operations base in neighboring Djibouti. France and the United States SOCOM (Special Operations Command) have had special operations forces (commandos and special aircraft) outside the Djibouti capital since 2002. In 2014 the U.S. signed another ten year lease for that base. U.S. forces in Djibouti were increased after resistance collapsed in Iraq in 2008 and the base is now the command post for a network of American operations through the region. Until recently most of the effort is directed at monitoring what is going on in the region (mainly Somalia and Yemen but also Eritrea, Nigeria, Mali, Libya, Kenya, and Ethiopia) not at interfering with the local terrorists. That has now changed with a growing international force of commandos operate from the Djibouti base which also supports operations throughout the Sahel (the semi-desert strip between the North African desert and the Central African jungles, which stretches from the Atlantic to Somalia).

Early today an al Shabaab bomb went off in the south near a Kenyan border crossing. Apparently Kenyan border police were the target but the timing of the detonation was off and no one was hurt.

June 10, 2016: Al Shabaab executed six men (four Somalis and two Kenyans) for spying and distributed video and pictures. One of those killed (by decapitation) was accused of providing key information to the Americans that led death of al Shabaab leader Ahmed Godane in September 2014. The U.S. has killed several senior al Shabaab leaders since then using missile equipped UAVs and information gathered from a number of sources, including informants on the ground. These executions, which are publicized, are an embarrassment for al Shabaab. The Islamic terrorists have become obsessed with halting the ability of the Americans to find their leaders and other key personnel and kill them with missiles. The U.S. does have some informants on the ground, but a lot of intel comes from UAV surveillance and electronic eavesdropping. Some al Shabaab know this, it’s good for morale (and to induce obedience among the locals) to execute a few “spies” from time to time.

June 9, 2016: In central Somalia (Hiran, 300 kilometers north of Mogadishu) al Shabaab used a suicide car bomb and gunmen to attack a base used by Ethiopian peacekeepers. The attack was repulsed but the fighting was intense and the casualties heavy. About thirty Ethiopian troops were killed, most of them by the car bomb and the initial fighting. Over a hundred of the attackers died. Al Shabaab is desperate to get soldiers and peacekeepers out of the area, where the presence of pro-government forces has made it increasingly difficult for al Shabaab groups to survive. This year it’s been more and more common for Islamic terrorist raiders to retreat when they find a town or village is protected and retreated by troops. In rural areas al Shabaab gets by via looting villages or unarmed travelers but that is difficult with the growing presence of troops and, because of that, pro-government militias. Successful attacks on military bases are one way to get the troops to withdraw, at least for a while. But the troops eventually return and the Ethiopians are the most difficult because they have been fighting Somalis for centuries and usually winning.

June 3, 2016: With great fanfare Turkey opened its new embassy in Mogadishu. This compound is near the beach and is the largest Turkish embassy in the world. The Turkish president was present as were most senior Somali officials and senior leaders from neighboring states. Turkey is making a statement; that is will help Somalia and will not be driven out by threats. Turkey has always provided Turkish security personnel for its embassy. The local outlaws and Islamic terrorists quickly found that the Turks were as tough as their reputation implied. Al Shabaab still makes threats against the Turks in Somalia, but usually chooses a less dangerous target. Al Shabaab cannot make as many attacks as it used to and suffering defeat going after the Turks makes little sense, even to Islamic radicals. The new embassy is part of a growing Turkish presence in Somalia. In January Turkey announced it was building a military base in Somalia where Turkish soldiers will train Somalis and troops from other parts of Africa. Turkey has been a major provider of aid from Moslem nations. Western countries still provide most of the aid to Somalia and Turkey is trying to encourage wealthy Moslem nations to change that, at least when it comes to Moslem nations in need. Turkey established an embassy in Somalia in 2011 (one of the first nations to do so) and a Turkish airline was one of the first to establish regular commercial service to Somalia in 2012. Senior Turkish officials (including the president) have visited Somalia in January, despite al Shabaab threats, and that gave other potential investors and aid donors encouragement. So far Turkey has provided over half a billion dollars in aid to Somalia. Encouraged by the Turkish example non-Moslem nations are now reopening their embassies. In 2013 Britain did so. British diplomats were withdrawn in 1991 and had been gone ever since.

June 1, 2016: In Mogadishu al Shabaab used a suicide car bomb and gunmen to attack a hotel used by foreigners and wealthy Somalis. It took all night for security forces to find and kill the last of the five (or more) attackers involved. At least ten security personnel, hotel staff and guests were killed and over fifty wounded. The dead included two members of parliament. Earlier in the day the government announced it had killed al Shabaab leader Mohamed Kuno, who was believed responsible for an April 2015 attack on Garissa University in Kenya that killed 148 people and led to increased Kenyan efforts to expel Somali refugees from Kenya and seal their border with Somalia.

May 31, 2016: In the south (outside the port of Kismayo) air strikes and ground troops were used to raid a group of al Shabaab men. It turned out that four of the fifteen dead were known al Shabaab leaders including one (Mohamed Kuno) who was wanted in Kenya for Islamic terrorist activities. Kenya offered a large ($215,000) reward for the capture of Kuno, who was a Kenyan citizen and ethnic Somali. Kuno was also known as Dulyadayn and Gamadhere and was thought to have been killed in 2015. But this time the U.S. confirmed the body was Kuno and that American air and ground forces were involved in the operation that killed Kuno.