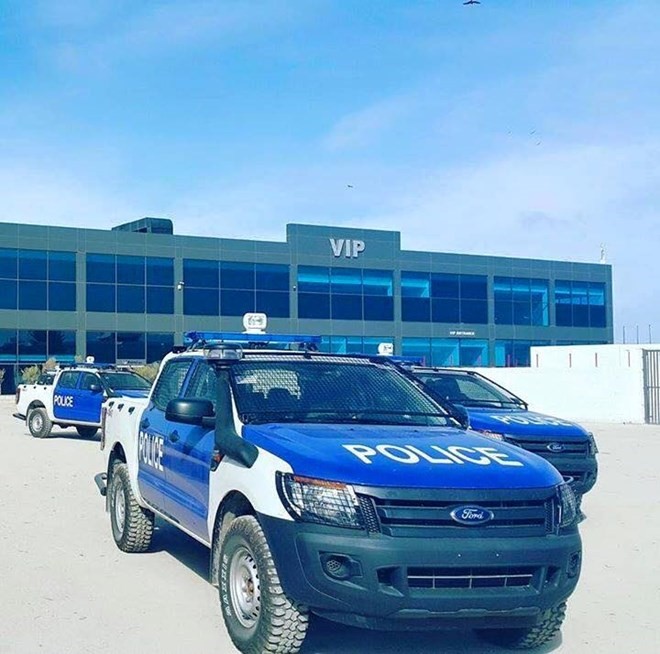 MOGADISHU (HAN) April 10. 2016. Public Diplomacy & Regional Security News. By Abdirashid SalahChildren writing their goodbyes to 2015 in the sand at Jaseera beach, a few km’s south of Mogadishu, optimistically welcoming in 2016 on New Year’s Day. The first international attempt to end the Somali conflict started with UNOSOM 1 and UNITAF in 1992-1993, dubbed as Operation Restore Hope. It was led by the United States Marines to UNOSOM II, the multinational peace keeping mission led by the UN. Though the first mission brought relief to hundreds of thousands of starving people, it ended in 1995 as a failure, shattering the dreams of millions of Somali’s by leaving them to their own devices, which allowed the warlords to continue the ruthless civil war up until 1999.

The vacuum left by the international community was quickly filled by a popular Islamist Militia, the Islamic Courts Union, (ICU), which had forcefully disarmed the despised warlords and brought a sense of normality and stability, unfamiliar to most of Somalia at the time. Washington and its regional ally Ethiopia became alarmed by the rise of Islamists in Somalia and reacted by sending in U.S. backed Ethiopian troops to invade in July 2006, in an attempt to dismantle the ICU and to prop up the Transitional Federal Government, (TFG), head-quartered in Baidoa. Tragically, this dismantling made room for the emergence of Al-Shabaab, who evolved to become a regional threat despised by many Somalis, if not by most of the ICU’s moderate leaders, for their brutality. Ethiopian troops withdrew from Somalia in January 2009 following a bloody two-year insurgency. As of December 2008, The Elman Peace and Human Rights Organization said it had verified that 16,210 civilians had been killed and 29,000 wounded since the start of the insurgency in December 2006. September of that year they had documented 1.9 million displaced civilians from homes in Mogadishu alone during the year 2007. This act of dismantling the ICU and the ensuing consequences again shattered the dreams of the Somali people longing for peace.

The UN Secretary General Boutros Boutros-Ghali proposed an expansion of the UN humanitarian mission to Somalia in 1992 to include nation building activities, including the disarming of warring militias. US Special Envoy to Somalia, Robert B. Oakley countered the UN leader’s proposal, in aTime Magazine article on December 28th 2002. He is quoted as saying that three things were important to a Somali man, “his camel, his wife and his weapon. The right to bear arms is in the Somali man’s soul”. Oakley, as the US Ambassador to Somalia in the 80’s, was well versed in the Somali culture and knew that disarming the heavily armed militias could result in a catastrophe. And indeed, the attempted result of doing just that was the infamous Black Hawk Down incident of 1993, which resulted in extremely heavy casualties, many of whom were civilians. The political bickering didn’t help the international community’s efforts to bring stability to Somalia. This proxy diplomatic war culminated in the failure of the UN mission altogether. Unfortunately both men, admired career diplomats, didn’t make it to see stability in Somalia in their remaining lifetime. After the Battle of Mogadishu, Clinton said it was a mistake for the United States to play the role of police officer in Somalia. He announced a six-month plan to remove U.S. troops from the country.

From the first failed reconciliation conferences held in Djibouti between June and July 1991 during the Somali civil war, to the 2004 Nairobi Conference at which the Transitional Federal Government (TFG) was agreed to, all have brought nothing short of bitter disappointment to Somalia’s hopes for stability. Sadly, none of the many conferences produced any concrete or lasting results to stabilize the nation.

A resurgent Al-Shabaab in 2015 and early 2016, the missed 2016 deadline for elections widely known as unattainable due to security gaps, and the return to the power sharing scheme, known as the 4.5 clan structure, (locally known as ‘Ku shubo’, literally meaning how much you can pay for the seat but not how much you can offer the country), have devastated if not all of the optimism and dreams that Somali’s clung to during their long march on the path to stability.

There are many complex layers attributing to Al-Shabaab’s rise in recent months, among others the interference by international actors with divisive agendas that often undermine Somalia’s unity, an incompetent Somali leadership, and the unlimited influence of the international community that sets forth priorities for Somalia’s future that make the nation increasingly seem like an unofficial UN protectorate, yet without the protection a protectorate is entitled to.

Abundant opportunities in a land of broken dreams

Since the forced withdrawal of Al-Shabaab from Mogadishu in August 2011 by the Somali government forces, (SNA), and the African Union Mission to Somalia, (AMISOM), the once ruined capital city of the Somali Republic started moving full force towards the path of stability and reconstruction. A never seen before optimism to invest in the business sector blossomed, mainly driven by the Somali business community and the diaspora.

Hard cash followed the return of thousands of Somali’s to resettle, which was applauded by everyone as a huge step forward. However, the recent rise of big scale attacks such as the one on Mogadishu’s popular Liido beach, could stem, not only the rebuilding of the city, but also the confidence of its inhabitants and investors. The momentous achievements made in recent years are in serious danger of being undermined and eroded.

Resilience of the Somali people as a nation

During the course of the last twenty-five years the dreams of the Somali people have been repeatedly and brutally shattered, but as they evolved in their country of uncertainties, Somali’s have become incredibly resilient, not only surviving but recovering and beginning to thrive against all the odds. Mogadishu is an outstanding example; a city of 2.5 million residents which lay in ruins for over two decades has now become vibrant in just four short years, even without the benefits of a marshal plan. Somali’s have shown the world that when the light of stability is present, even as a glimmer, they are not only eager but very capable of acting swiftly to rebuild and invest with full confidence in their country of uncertainties, opportunities and broken dreams. However, can anyone stay indefinitely resilient against such enormous odds?

Yet it’s not too late for the Somali government and the international community to rethink its self-defeating strategy and to act swiftly in reversing the current tide of Al-Shabaab’s resurgence, restoring Somalia’s shattered dreams of peace and stability, perhaps this time, once and for all. Only history will write the remaining tale.