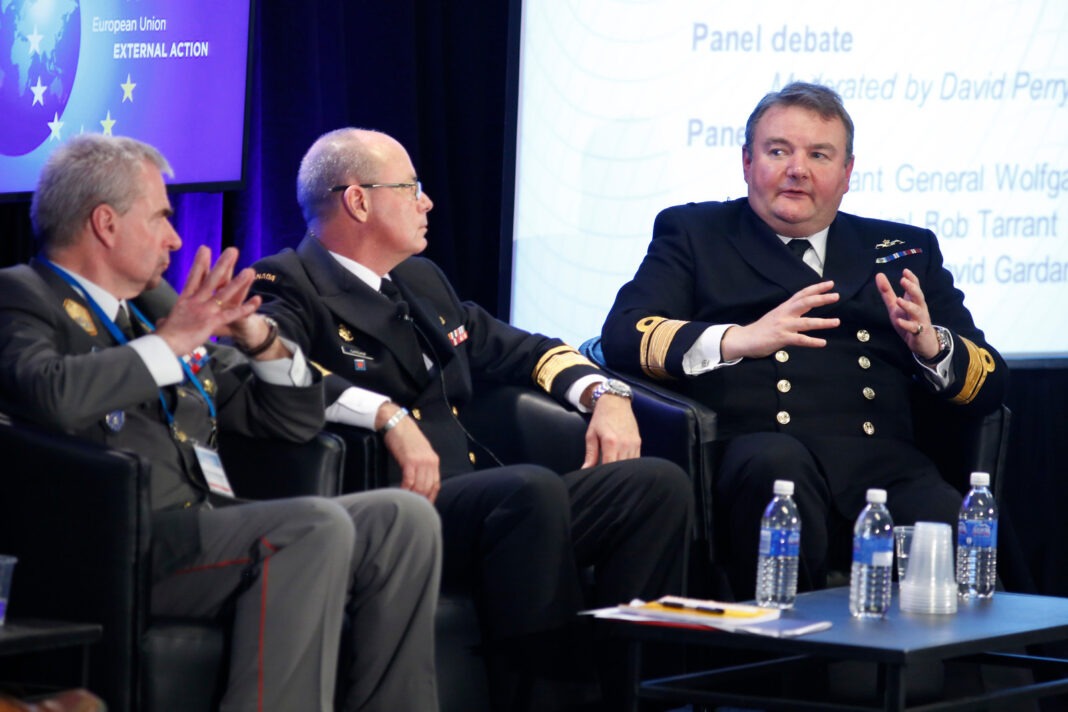 Nairobi (HAN) May 18, 2014. Regional Weekly Piracy news update.  According to the European anti-piracy fleet Atalanta, the last capture of a major vessel by pirates dates back to May 2012. Since then, several vessels have been attacked or targeted, but the pirates have not managed to seize any of them; either in Somalia, Somaliland or Puntland sea zones.
They have been able to capture a handful of dhows, traditional sailing vessels,  with the aim of using them as mother ships for launching attacks on other vessels, but the booty these yield pales in significance compared with that taken from the vessels seized when piracy was at its peak: Catches in those days included two supertankers, each carrying close to 2 million barrels of crude oil, and a Ukrainian cargo ship loaded with arms.

“We are becoming victims of our own success,” said Lieutenant Michael Quinn of Atalanta, adding that “the conditions on the Somali[an] coast have not changed and industry must not relax.”
The EU Naval Force’s mandate applies only to the sea; it is not authorized to launch land attacks on the pirates who still control large sections of the Somalian coast, notably in Puntland.
EUCAP-Nestor’s mission, which complements Atalanta’s, is therefore to “go ashore and train coast guards so that the countries of the region can be in a position to manage and control their maritime waters, but also to help them put legislation in place,” De Poncins said. 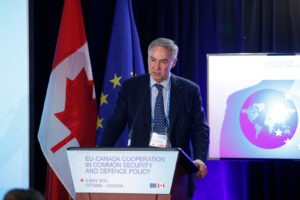 If the coast of Somalia’s autonomous Puntland State is still home to pirates, they take to the seas a lot less frequently than they used to.  The presence of an international armada and the deterrents put in place by shipping companies have reduced piracy off the Somalian coast and in the Gulf of Aden to practically nothing, but the threat is still very present.  Just a few months after the Operation Commander of the EU Naval Force, Rear Admiral Bob Tarrant (picture, attending The first EU-Canada first defense and security Symposium ) , issued another warning about the on-going Somali piracy threat, there have been more piracy related incidents off the Somali coast.

Moderator: Richard Cohen, former senior defence advisor to the minister of National defence, moderated the panel, Crisis Management and support to peacekeeping in Africa and beyond, will soon conduct an interview to elaborate about the issues.

The Sirocco has not made any major catches either in its four months as Atalanta’s flagship, except for five pirates arrested in mid-January on board an Indian dhow they seized in a vain attempt to board a tanker. Since then, the ships that make up the fleet have confined themselves to patrolling, keeping a watchful eye on the zone.
“The economic model of piracy has been broken,” said Etienne de Poncins, the head of EUCAP-Nestor, a EU mission that aims to beef up the security capacities of Somalia, Djibouti, Kenya, the Seychelles and Tanzania, and enable them to carry out surveillance of their own territorial waters.

When Somali piracy was at its peak in 2011, the International Maritime Bureau counted 237 attacks attributed to pirates in the Indian Ocean, from the Somalian coast across the Sea of Oman.
Last year, the bureau recorded just five, all of which failed.  “At sea the phenomenon is under control, but the pirates are still there. They can be seen on the coast,” De Poncins said.

By arresting numerous pirates over the past few years, Atalanta and its allies — NATO, China and Japan, which have all deployed considerable means in the region, a shipping route key to world trade — have had a dissuasive effect. A raft of measures taken by the shipping sector have also contributed to the decline of piracy: The presence of armed guards on board, the use of barbed wire, an increase in navigation speeds and navigating as far from the coast as possible.
Experts say pirates have never managed to seize a vessel protected by armed guards or sailing at a speed of more than 18 knots (33.3kph), but these measures are expensive, so much so that the World Bank said “piracy imposed a hidden tax on world trade.”
“Piracy costs the global economy roughly US$18 billion a year in increased trade costs — an amount that dwarfs the estimated US$53 million average annual ransom paid since 2005,” the bank said last year.
“It’s expensive, so the day when the shipping companies say: ‘That’s enough,’ the whole thing can kick off again quite quickly,” De Poncins said.
EU Naval Force officials say that given that attacks are becoming rare, ship owners and captains are starting to let their guard down, reporting that ships are again navigating at slower speeds and sailing closer to the coast to save fuel.

photo: The Symposium focused on reinforcing the transatlantic security and defence community through sharing lessons and identifying possibilities for further cooperation in reinforcing the transatlantic defence community, maritime security, capabilities development, crisis management and support to peacekeeping in Africa. The first EU Symposium provided an opportunity for allied military and foreign policy officials to exchange views and experiences with their European counterparts on the ways of enhancing cooperation, including the EU’s CSDP partnerships; on EU-NATO cooperation and the Horn of Africa piracy issues attended by Geeska Afrika Online Managing Editor and Publisher as well as the Operation Commander of the EU Naval Force, Rear Admiral Bob Tarrant.