OTTAWA (HAN) JULY 26. 2022. Public Diplomacy and Regional Stability Initiatives News. Monitoring Regional Issues. BY: Dr. Suleiman Walhad. The East Africa Community was first established in 1967. It was, indeed, a reforming of the old British East Africa which included the countries of Kenya, Uganda, Tanganyika and Zanzibar. The latter two, Tanganyika and Zanzibar united to create the new state of Tanzania and the block then consisted of the three Swahili speaking countries of Kenya, Uganda and Tanzania. Because of irreconcilable political differences mostly instigated by the cold war between the then East and West blocks of the world, one led by the United States and the other by the Ex-USSR, the East Africa Community was dissolved in 1977. 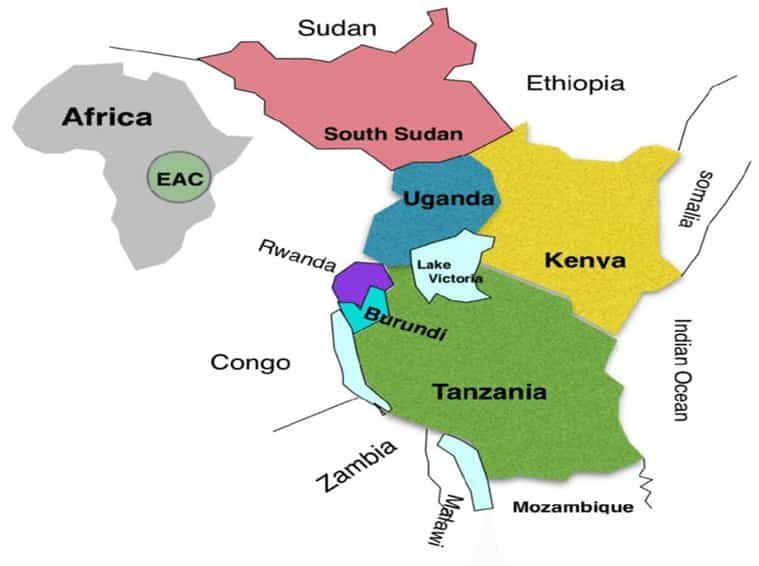 The foundation of the East Africa Community goes back to early 20th century when Britain controlled most of the region and created the East Africa Currency Board, which managed a common currency for the region from 1919 to 1966. The region started with a common market between Kenya and Uganda in 1917, which Tanzania joined in 1927. This was followed by the East African High Commission from 1948 to 1961 and the East Africa Common Services Organization from 1961 to 1967, when the East African Community was established, and this collapsed in 1977 when Kenya insisted on getting more seats than Uganda and Tanzania in the decision-making organs of the block. But there was another major difference between the economic systems of the three countries whereas Kenya was following a free-market economy and  Tanzania was then following a socialist leaning system, with Uganda under the dictatorial regime of Idi Amin. It was a difficult proposition to maintain, and it had to collapse.

The region owns the sources of both the two largest rivers in Africa, the Congo and the Nile and it owns the largest lake, Lake Victoria and the highest mountain, Mountain Kilimanjaro in the African continent. This makes it extremely an important and strategic region, and whoever controls it, controls the destiny of many a nation and people and, in fact, would have an impact on the rest of the world. Note the DR Congo, remains a geographically anomalous country containing most high value minerals of the world in commercial quantities. These include among others cobalt, copper, columbite or coltan as others call it, gold and diamonds, chrome, uranium, iron ore, magnesium and manganese and many others, a list too long to include here.

The region also owns many other notable features such as the world’s largest animal population in the East African savannah and, indeed, a significant high population of over three hundred million people soon to grow to half a billion. The region is centrally located and separates Southern Africa from Northern Africa and hence perhaps, a name change would be appropriate to call it the Central Africa Community (CAC).

There are certain commonalities such as the Kiswahili language, which most people of the region speak, European ex-colonies  and an economic integration and co-operation would help them from benefitting from collective bargaining. Other than that, they are all primary goods producers and should normally be competing among each other for world markets. This is where the region may fail and hence cause more trouble than is apparent at first glance.

Other features that may cause a clash is related to the old administrative cultures they inherited from the old European colonisers. One is generally continental Europe with French and bureaucracy as the main feature and the other British Islandic and non-bureaucratic. These two and the official languages (French and British) would clash as this provides a gateway for malevolent non-regional actors’ access to the region.

Violence in the region is well documented. These include Africa’s war when the DR Congo was ablaze and over six African countries were fighting and internal ethnic conflicts which led to millions of dead in the region from South Sudan to Rwanda, Burundi and even the more stable Kenya, where regularly ethnic violence flares in the north and  on election times in the centre and the west. Uganda is well known for its Lord’s Army Resistance.

While it appears a good dream to have so many African countries joining forces to help in the development of the continent, an elite driven process usually fails, and it would appear the East Africa Community is not a grass-roots proposition and would have a long way to go. Even the elites do not sell the product as well as they should.

Social issues in terms of poverty, diseases, lack of education are rampant in the region. As in many African leadership issues, personal differences and dislike among leaders some time derail great and valuable opportunities. In the east Africa Community context, one is aware of the relationships between the Rwandan and the Ugandan leaderships, the main cause of the DR Congo Africa War. There is always, also shortage of funds for the community, common currency issues, transportation and other logistical problems and worst of all, when member countries put their own interests before those of the community and this is something that is prevalent in the region, which does not abide by the rules they set for themselves.

Some of those ills are covered through appeals to other countries to join to show that something is good is in the works when actually there is nothing good going on. Bringing in new members is not always the solution. The East Africa Community should consolidate what they have and put the region on firm footing before bringing in more countries with their own problems such as the DR Congo actually represents – a troubled country that does not even control its own regions and which does not have adequate access through proper roads to most regions of the vast Congo basin. It was interesting that Somalia, a Horn of Africa States country being hustled to also join a disparate and unworkable proposition such as the East Africa Community currently represents. It is pretty clear that Somalis would reconsider such an ill-advised application to a region that only exists in the mindset of elites. They actually have no mandates from their own peoples to be members of the organization for no country has ever asked its people through a referendum whether to join this organization or not. Somalia already erred in joining another dysfunctional organization, the Arab League with which they share very little. Somali delegations are always an embarrassment when they attend any Arab Conference for they do not speak Arabic and they always seems odd to have them sitting at the table. Joining the East Africa Community would be another embarrassment when the conferences of the community are conducted in Kiswahili, a language different from the Cushitic Somali language.

Dr. Walhad writes on the Horn of Africa economies and politics. He can be reached at walhad@hornafric.org