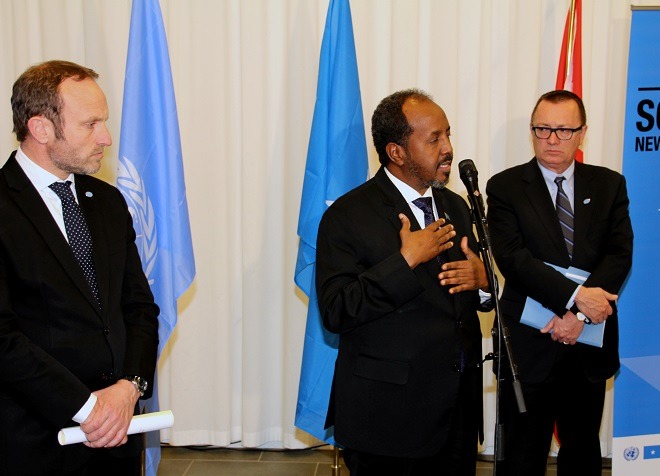 Copenhagen (HAN) November 21, 2014 – Public diplomacy and Regional Security and safety news. The first  High Level Ministerial Partnership Forum was concluded in Copenhagen, Denmark, co-chaired by The Somali President Hassan Sheikh Mohamoud, and Jeffrey Feltman of the United States (Jeffrey Feltman of the United States assumed the post of Under-Secretary-General for Political Affairs on 2 July 2012. Feltman was appointed by Secretary-General Ban Ki-moon), and hosted by the Prime Minister of Denmark.

1. The first  High Level Ministerial Partnership Forum welcomed the progress report and said the international community would continue to use the principles of New Deal Engagement in Fragile States based on mutual accountability between Somali government institutions and international partners:
2.    Fifty-six delegations gathered to review progress made since the Brussels Conference in September 2013, where the New Deal Somali Compact was endorsed, acknowledge challenges encountered in 2014, and identify priorities for 2015.

4.    We welcome the Somali Compact progress report, including the Somaliland Special Arrangement annual report, as a first step towards tracking and reporting of implementation of the Somali Compact. We will continue to use the principles of New Deal Engagement in Fragile States based on mutual accountability between Somali government institutions and its international partners, as the basis for ensuring a nationally-led and nationally-owned approach to development. We encourage the Federal Government to continue their efforts to operationalise the Somali Compact with the effective involvement of the sub-regional and regional administrations.

5.    We emphasise that the Somali people need to see the tangible results and deliverables, at the local level of the Somali Compact. To support this we commit to improve the effectiveness of the PSG working groups and the allocation of a dedicated amount of the resources under each Peace and Statebuilding Goals (PSGs) to help further strengthening the link between central and local administration, in order to enhance further development. We recognise that the establishment of the New Deal financing architecture has advanced, including through the establishment of the UN and World Bank administered funding windows and that aid flows have increased. We look forward to the quick establishment of the remaining funding windows, administered by the AfDB and IMF.

6.    We acknowledge the considerable gains of the past two years in the process to secure a more stable, peaceful and prosperous Somalia. Somalia today stands at a critical juncture. These gains and the overall positive trajectory of Somalia must not be lost. We express concern with the current political crisis. We recognise the need to restore political stability and regain momentum of delivery quickly.  It is time now for inclusive politics and unity of purpose within the government. Going forward, we call on Somalia’s political leadership to unite and ensure the stability that is critical for the implementation of Vision 2016.

7.    We recognise the progress made in the state formation process. The finalisation of a new federal state structure in 2015 is central to our efforts to return peace, stability and development to Somalia. We encourage all stakeholders to engage in these efforts as well as in reconciliation initiatives that will support the achievement of Vision 2016. The existing Administrations such as Puntland, the Interim Jubba Administration (IJA), Galmudug and emerging administrations will be closely engaged in the implementation of Vision 2016. We welcome progress towards the formation of interim administrations in South-West and Central Somalia. We comment IGAD’s efforts on supporting the state formation.

8.    We recognise the need to avoid any further delays in the implementation of Vision 2016 and we recommit to the goal of having democratic, inclusive and legitimate elections in 2016. To that end, the government will establish the Inter-Regional Consultative Forum (IRCF) and the constitutional review process must be completed. International partners will support, including financially, the assessment of electoral modalities. We welcome the establishment of the Independent Constitutional Review and Implementation Commission and look forward to the appointment of the members of the Oversight Committee. We urge the swift establishment of the National Independent Electoral Commission as well as the Boundaries and Federation Commission. We welcome the commitment to the legislative timetable already agreed, and urge the passing of critical legislation within the current Session.

9.    We commend the SNA and AMISOM for their successful campaign against al-Shabaab, including operations Eagle and Indian Ocean. We reaffirm our commitment to support Somali Federal and sub-federal authorities in defeating al-Shabaab and reiterate our strong condemnation of all forms of terrorism and extremism.

10.    We commit to the implementation of the commitments made at the London Security Event, including the integration of local armed forces and development of the SNA Development Partnership agreement, based on the mutual accountability commitments, by end of January 2015. The Federal Government will enhance compliance with the UN Security Council Resolution 2182 (2014).

11.    We note steps taken to strengthen the professionalisation of the Somali Police Force, including progress on restructuring and support of police forces, training, ranking development of disciplinary procedures. We welcome the deployment of police officers to newly recovered areas, and urge the Federal Government to continue this systematically and endeavour to secure funding to support its personnel.

12.    We welcome progress in reducing piracy but the threat remains. We encourage the Federal Government to produce its Maritime Security Strategy.

13.    We welcome the progress on the rule of law, through the establishment of the Judicial Services Commission and the Joint Implementation Unit. We applaud the Somali stakeholders’ engagement in the rule of law priorities programme and implementation plan, which paved the way for the addressing the underfunding of this sector.

14.    We congratulate the government on its progress to improve the management of Somalia’s public finances, including through increased revenue collection, strengthened budget policy, and payment controls, under the new Financial Information Management System (FIMS). We acknowledge the role of the Financial Governance Committee (FGC) and urge the Committee to further strengthen its oversight work on public procurement, concessions, and the recovery of Somalia’s national assets within two years, and exhort the Federal Government to implement its recommendations. We emphasise the need for swift adoption of critical legislation, and strengthen capacities of the independent Office of the Auditor General and oversight function of the Accountant General.

15.    We welcome the ambition of the Somali government to strengthen the transparency, coordination and alignment of international assistance, by increasing the share of external resources using the national budget framework. We welcome the “Interim Roadmap towards the Use of Country PFM Systems” and note the now-established “national windows” of the Somalia Development and Reconstruction Facility (SDRF).

16.    We encourage the reengagement of International Financial Institutions (IFIs) in Somalia, paving the way to arrears clearance and debt relief, within the framework of HIPC. We look forward to the International Monetary Fund (IMF) staff monitored programme, in 2015.

17.    Effective measures to combat corruption and promote transparency and accountability are also key to strengthen the legitimacy of the state. We commend the Federal Government’s decision to accelerate the establishment of an independent Anti-Corruption Commission and the effective operation of the judicial system.

18.    We recognise the importance of developing infrastructure as a basis for economic recovery and job creation. We note that work is underway to complete the national infrastructure assessment, and call for a dedicated international meeting to present identified infrastructure priorities and projects in early 2015.

19.    We are alarmed by the critical humanitarian situation in Somalia, fragile gains since 2011 famine are being eroded. We note that persistent drought, seasonal floods, continuous fighting and displacement lead to major food insecurity and rising malnutrition levels. We recognise the urgency to establish safe and unhindered access to all areas of Somalia, in particular newly recovered areas, in full respect to international humanitarian law and principles. We recognise the importance of building resilience, through better linkages between humanitarian and development programmes, with a particular focus on durable solutions.

20.    Protecting and promoting human rights, including adoption of measures to prevent violence against women, is key to the credibility of Federal Government and building and maintaining the confidence of the population.  We welcome the development of legal and policy frameworks to promote human rights and protection of women and children in conflict and to ensure women and children’s rights, and encourage the development and implementation of action plans as well as the swift establishment of the Independent Human Rights Commission. We welcome the commitments made by the Federal Government in its 2011 Universal Periodic Review (UPR), before the United Nations Human Rights Council.

21.    We recognise the vital contribution of women to the social, economic and political life of Somalia.  We welcome the measures agreed at the event on women participation in the political process, to promote the role of women in peace processes and the political transformation of the country.

22.    We recognise the importance of addressing the needs of youth in Somalia, and welcome the swift finalisation of a youth national policy.

23.    We commit to reviewing progress in political and security areas within six months.

24.    In conclusion we thank all participants for their constructive engagement; we have set the foundations for a sovereign, secure, democratic, united and federal Somalia, at peace with itself and the world and for the benefit of its people. On these foundations we must now raise the pillars of stability, security, equality and prosperity. 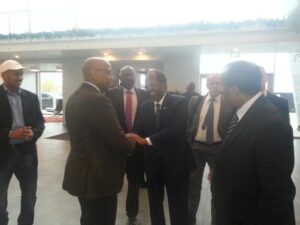