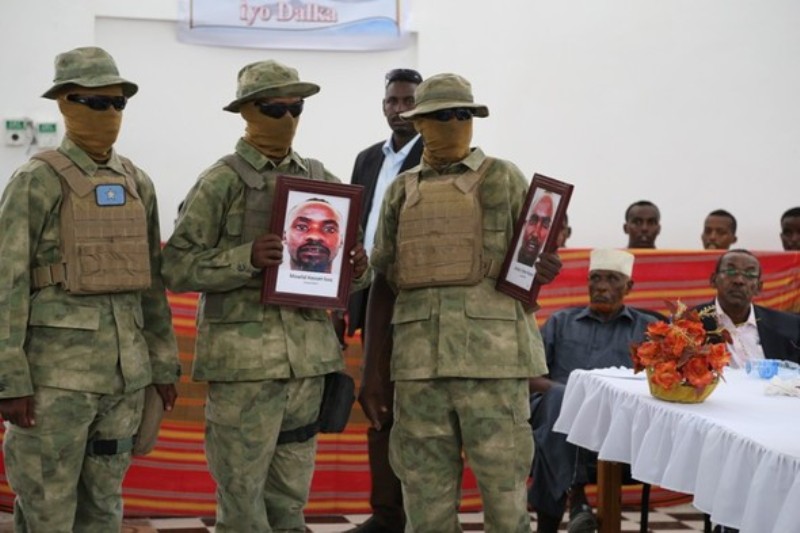 Washington (HAN) December 10, 2014 – Expert Analysis, Your Power & Regional Influence Magazine, opinion page by. Jeremy Scahill . Renditions, an underground prison and a new CIA base are elements of an intensifying US war, according to a Nation investigation in Mogadishu,  (This article appeared in the August 1-8, edition of The Nation).

Obama discussed the targeted killing operation today, but will anything really change?

Nestled in a back corner of Mogadishu’s Aden Adde International Airport is a sprawling walled compound run by the Central Intelligence Agency. Set on the coast of the Indian Ocean, the facility looks like a small gated community, with more than a dozen buildings behind large protective walls and secured by guard towers at each of its four corners. Adjacent to the compound are eight large metal hangars, and the CIA has its own aircraft at the airport. The site, which airport officials and Somali intelligence sources say was completed four months ago, is guarded by Somali soldiers, but the Americans control access. At the facility, the CIA runs a counterterrorism training program for Somali intelligence agents and operatives aimed at building an indigenous strike force capable of snatch operations and targeted “combat” operations against members of Al Shabab, an Islamic militant group with close ties to Al Qaeda.
Gutteridge, who has worked extensively tracking the disappearances of terror suspects in Kenya, was deported from Kenya on May 11.

The underground prison where Hassan is allegedly being held is housed in the same building once occupied by Somalia’s infamous National Security Service (NSS) during the military regime of Siad Barre, who ruled from 1969 to 1991. The former prisoner who met Hassan there said he saw an old NSS sign outside. During Barre’s regime, the notorious basement prison and interrogation center, which sits behind the presidential palace in Mogadishu, was a staple of the state’s apparatus of repression. It was referred to as Godka, “The Hole.”

“The bunker is there, and that’s where the intelligence agency does interrogate people,” says Abdirahman “Aynte” Ali, a Somali analyst who has researched the Shabab and Somali security forces. “When CIA and other intelligence agencies—who actually are in Mogadishu—want to interrogate those people, they usually just do that.” Somali officials “start the interrogation, but then foreign intelligence agencies eventually do their own interrogation as well, the Americans and the French.” The US official said that US agents’ “debriefing” prisoners in the facility has “been done on only rare occasions” and always jointly with Somali agents.

Some prisoners, like Hassan, were allegedly rendered from Nairobi, while in other cases, according to Aynte, “the US and other intelligence agencies have notified the Somali intelligence agency that some people, some suspects, people who have been in contact with the leadership of Al-Shabaab, are on their way to Mogadishu on a [commercial] plane, and to essentially be at the airport for those people. Catch them, interrogate them.”
As part of its expanding counterterrorism program in Somalia, the CIA also uses a secret prison buried in the basement of Somalia’s National Security Agency (NSA) headquarters, where prisoners suspected of being Shabab members or of having links to the group are held. Some of the prisoners have been snatched off the streets of Kenya and rendered by plane to Mogadishu. While the underground prison is officially run by the Somali NSA, US intelligence personnel pay the salaries of intelligence agents and also directly interrogate prisoners. The existence of both facilities and the CIA role was uncovered by The Nation during an extensive on-the-ground investigation in Mogadishu. Among the sources who provided information for this story are senior Somali intelligence officials; senior members of Somalia’s Transitional Federal Government (TFG); former prisoners held at the underground prison; and several well-connected Somali analysts and militia leaders, some of whom have worked with US agents, including those fro
m the CIA. A US official, who confirmed the existence of both sites, told The Nation, “It makes complete sense to have a strong counterterrorism partnership” with the Somali government.

The CIA presence in Mogadishu is part of Washington’s intensifying counterterrorism focus on Somalia, which includes targeted strikes by US Special Operations forces, drone attacks and expanded surveillance operations. The US agents “are here full time,” a senior Somali intelligence official told me. At times, he said, there are as many as thirty of them in Mogadishu, but he stressed that those working with the Somali NSA do not conduct operations; rather, they advise and train Somali agents. “In this environment, it’s very tricky. They want to help us, but the situation is not allowing them to do [it] however they want. They are not in control of the politics, they are not in control of the security,” he adds. “They are not controlling the environment like Afghanistan and Iraq. In Somalia, the situation is fluid, the situation is changing, personalities changing.”

According to well-connected Somali sources, the CIA is reluctant to deal directly with Somali political leaders, who are regarded by US officials as corrupt and untrustworthy. Instead, the United States has Somali intelligence agents on its payroll. Somali sources with knowledge of the program described the agents as lining up to receive $200 monthly cash payments from Americans. “They support us in a big way financially,” says the senior Somali intelligence official. “They are the largest [funder] by far.”

According to former detainees, the underground prison, which is staffed by Somali guards, consists of a long corridor lined with filthy small cells infested with bedbugs and mosquitoes. One said that when he arrived in February, he saw two white men wearing military boots, combat trousers, gray tucked-in shirts and black sunglasses. The former prisoners described the cells as windowless and the air thick, moist and disgusting. Prisoners, they said, are not allowed outside. Many have developed rashes and scratch themselves incessantly. Some have been detained for a year or more. According to one former prisoner, inmates who had been there for long periods would pace around constantly, while others leaned against walls rocking.

A Somali who was arrested in Mogadishu and taken to the prison told The Nation that he was held in a windowless underground cell. Among the prisoners he met during his time there was a man who held a Western passport (he declined to identify the man’s nationality). Some of the prisoners told him they were picked up in Nairobi and rendered on small aircraft to Mogadishu, where they were handed over to Somali intelligence agents. Once in custody, according to the senior Somali intelligence official and former prisoners, some detainees are freely interrogated by US and French agents. “Our goal is to please our partners, so we get more [out] of them, like any relationship,” said the Somali intelligence official in describing the policy of allowing foreign agents, including from the CIA, to interrogate prisoners. The Americans, according to the Somali official, operate unilaterally in the country, while the French agents are embedded within the African Union force known as AMISOM.

Among the men believed to be held in the secret underground prison is Ahmed Abdullahi Hassan, a 25- or 26-year-old Kenyan citizen who disappeared from the congested Somali slum of Eastleigh in Nairobi around July 2009. After he went missing, Hassan’s family retained Mbugua Mureithi, a well-known Kenyan human rights lawyer, who filed a habeas petition on his behalf. The Kenyan government responded that Hassan was not being held in Kenya and said it had no knowledge of his whereabouts. His fate remained a mystery until this spring, when another man who had been held in the Mogadishu prison contacted Clara Gutteridge, a veteran human rights investigator with the British legal organization Reprieve, and told her he had met Hassan in the prison. Hassan, he said, had told him how Kenyan police had knocked down his door, snatched him and taken him to a secret location in Nairobi. The next night, Hassan had said, he was rendered to Mogadishu.

According to the former fellow prisoner, Hassan told him that his captors took him to Wilson Airport: “‘They put a bag on my head, Guantánamo style. They tied my hands behind my back and put me on a plane. In the early hours we landed in Mogadishu. The way I realized I was in Mogadishu was because of the smell of the sea—the runway is just next to the seashore. The plane lands and touches the sea. They took me to this prison, where I have been up to now. I have been here for one year, seven months. I have been interrogated so many times. Interrogated by Somali men and white men. Every day. New faces show up. They have nothing on me. I have never seen a lawyer, never seen an outsider. Only other prisoners, interrogators, guards. Here there is no court or tribunal.’”

After meeting the man who had spoken with Hassan in the underground prison, Gutteridge began working with Hassan’s Kenyan lawyers to determine his whereabouts. She says he has never been charged or brought before a court. “Hassan’s abduction from Nairobi and rendition to a secret prison in Somalia bears all the hallmarks of a classic US rendition operation,” she says. The US official interviewed for this article denied the CIA had rendered Hassan but said, “The United States provided information which helped get Hassan—a dangerous terrorist—off the street.” Human Rights Watch and Reprieve have documented that Kenyan security and intelligence forces have facilitated scores of renditions for the US and other governments, including eighty-five people rendered to Somalia in 2007 alone. Gutteridge says the director of the Mogadishu prison told one of her sources that Hassan had been targeted in Nairobi because of intelligence suggesting he was the “right-hand man” of Saleh Ali Saleh Nabhan, at the time a leader of
Al Qaeda in East Africa. Nabhan, a Kenyan citizen of Yemeni descent, was among the top suspects sought for questioning by US authorities over his alleged role in the coordinated 2002 attacks on a tourist hotel and an Israeli aircraft in Mombasa, Kenya, and possible links to the 1998 US Embassy bombings in Kenya and Tanzania.

An intelligence report leaked by the Kenyan Anti-Terrorist Police Unit in October 2010 alleged that Hassan, a “former personal assistant to Nabhan…was injured while fighting near the presidential palace in Mogadishu in 2009.” The authenticity of the report cannot be independently confirmed, though Hassan did have a leg amputated below the knee, according to his former fellow prisoner in Mogadishu.

Two months after Hassan was allegedly rendered to the secret Mogadishu prison, Nabhan, the man believed to be his Al Qaeda boss, was killed in the first known targeted killing operation in Somalia authorized by President Obama. On September 14, 2009, a team from the elite US counterterrorism force, the Joint Special Operations Command (JSOC), took off by helicopters from a US Navy ship off Somalia’s coast and penetrated Somali airspace. In broad daylight, in an operation code-named Celestial Balance, they gunned down Nabhan’s convoy from the air. JSOC troops then landed and collected at least two of the bodies, including Nabhan’s.

Hassan’s lawyers are preparing to file a habeas petition on his behalf in US courts. “Hassan’s case suggests that the US may be involved in a decentralized, out-sourced Guantánamo Bay in central Mogadishu,” his legal team asserted in a statement to The Nation. “Mr. Hassan must be given the opportunity to challenge both his rendition and continued detention as a matter of urgency. The US must urgently confirm exactly what has been done to Mr. Hassan, why he is being held, and when he will be given a fair hearing.”