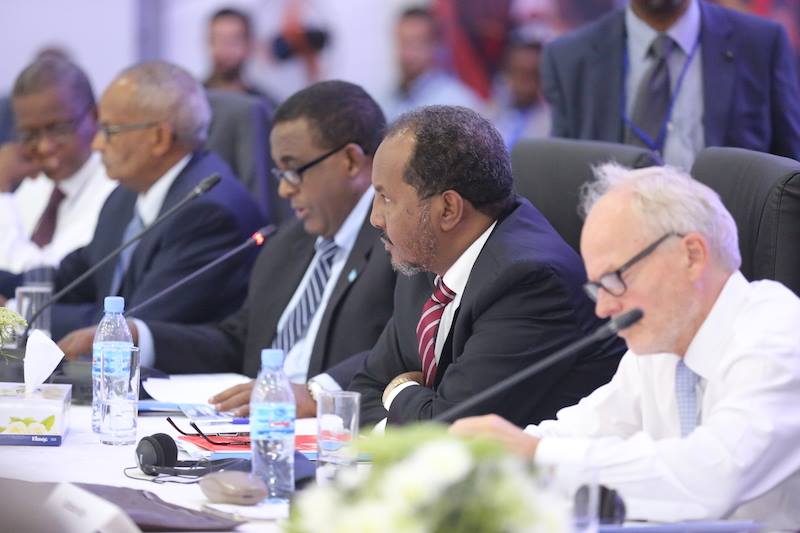 Mogadishu (HAN) July 30, 2015 – Public Diplomacy and Regional Security Initiative News – Readout of Communiqué and endorsement. A statement issued by the Meeting’s organizers the High-Level Partnership Forum (HLPF), press conferences and consultations ‑‑ encouraged parliamentarians to develop closer cooperation among themselves, with Somali Federal Government, and with the United Nations, with a view to supporting a comprehensive, just and lasting peace in the region, including a peaceful settlement of the question of regional states, to address the challenges hindering the implementation of speedy Peace and Statebuilding Goals entailed in the New Deal Somali Compact.

The High-Level Partnership Forum (HLPF) opened in Mogadishu to review the country’s progress in political, security and economic sectors. The 2-day forum is co-hosted by the President of the Federal Government of Somalia, H.E Hassan Sheikh Mohamoud and the Special Representative of the United Nations Secretary-General (SRSG) to Somalia, Nicholas Kay, and brings together key international partners and representatives from 30 countries, leaders of the Somali Federal Government and Interim Regional Administrations. Under the theme “Delivering Results in Somalia”, HLPF aims to address the challenges hindering the implementation of speedy Peace and Statebuilding Goals entailed in the New Deal Somali Compact.

In his opening remarks, President Mohamoud outlined the successes achieved to date such as the peaceful formation of the three regional administrations, establishment of the Boundaries and Federal Commission and the National Independent Commission, the ongoing review of the Constitution and the upcoming action plan for the electoral process for 2016. He said that national consultations will be held over the next six months to determine a legitimate process for the transfer of power in 2016 and stressed the importance of unity in achieving this goal. “The future of Somalia is embedded in democracy and will only be secured through inclusivity, diversity and equal access to democracy. These ideals will be best secured by an election that allows every eligible citizen the chance to directly elect their own representative,” President Mohamoud stated.

He added that the one-person, one-vote solution is the best option for future transfer of political power. However, he also stated that such a solution must be delivered without harming the future. SRSG Kay lauded the tremendous progress made in Somalia in the last six months, emphasizing on further deliberations to build on gains already made. “What we have in Somalia is something relatively rare, and incredibly important. We see a country coming together,” SRSG Kay said. “A country once mired in conflict that now has progressively better functioning governance,” he said. SRSG Kay also brought attention to United Nations Security Council Resolution 2232 that stated “there should not be an extension of electoral process timelines for either the executive or legislative branches” as well as “the importance of implementing this commitment including through an inclusive process”. SRSG Kay called for visible delivery to the Somali people as a crucial foundation for peace and statebuilding.