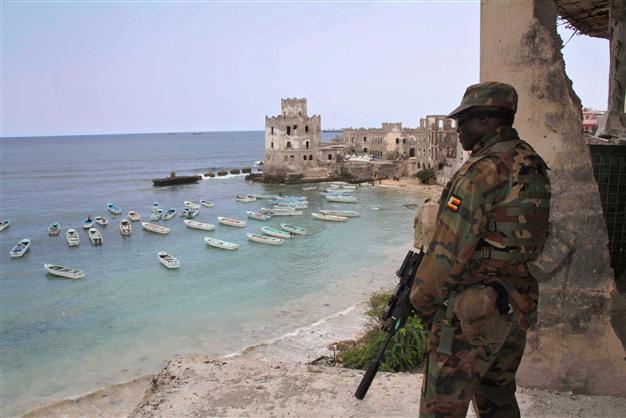 Kampala (HAN) June 27, 2015 – Public Diplomacy and Regional Security News. By, Hudson Apunyo. A former Ugandan Lord’s Resistance Army (LRA) Commander turned UPDF officer who was June 17 killed in an ambush in Southern Somalia by Al-Shabaab militants has been laid to rest at his home in Boroboro Parish, outside Lira town.

Maj. Geoffrey Kyomuhendo, an officer from Task Force 21 of UGABAG 15 (21Bn) in Somalia who escorted the casket told mourners that Lt. Denis Okech Okello died as a result of a bomb that hit his vehicle that was traveling in a convoy he was commanding from Tortorow to Baledogle.

“We are deeply saddened by the death of our gallant officer which occurred on June 17 on Tortorow Balidogle road (A former military Airspace in Somalia),” he said.

Maj. Kyomuhendo said Lt. Okello died in line of duty as a loyal and courageous commander. He said Okello played a pivotal role in the capture of Tortorow town from Al-Shabaab militants two weeks before his death.

Early this month, the Somali National Army supported by African Union Mission in Somalia (AMISOM) troops under the ‘Operation Western Sweep,’ captured Tortorow, a town located in the Lower Shabelle region of Somalia from Al-Shabaab militants.

AMISOM said in a statement that the repulsed militants resorted to using Improvised Explosive Devices (IED) to attack soft targets such as supply convoys.

The army apologized for late delivery of the remains siting constrains in resources.

Maj. Gen. Mohammedesha Zeyinu who wrote for force Commander AMISOM said Okello “was exemplary in the conduct of his duties, always at the forefront during the difficult time and showing dedication to the mission mandate.”

“His loss will not be in vain, but rather a justification for continued effort by the officers and men serving in this mission to attain the objective for which he demonstrated such selfless dedication, courage and strength.”

Uganda Contingent Commander Brig. Gen. Sam Kavuma said the UPDF have misswed him but shall continue with the resolute to achieve what he sacrificed his life for.

The UPDF Chief of Personnel and Administration Brig Joseph Musanyufu noted that Okello was a true patriot, his valor and bravery are evident. He said the family and the UPDF as an institution has incurred a big loss.

Lira District chairperson Alex Oremo Alot said he does not want Uganda to be very happy across the board yet there is pain North, East and West. “I would like everybody to feel comfortable in their areas of operation.”

Adekokwok Sub County LC III Chairperson Alengo urged the youth not to be discouraged by the death of Lt. Okello from joining the army.

Okello was born on December 10, 1975 to Willy Okech of Ngilaacel clan. First born, Okello went to Canon Lawrence Demonstration School for P1 to P7. He then joined Apala Secondary School in 1994 but was abducted by LRA two years later.

He returned from captivity in 2004 and was integrated into the UPDF.

According to records, he joined the UPDF on February 19, 2004 and was commissioned to 2Lt in 2007. The following year he was promoted to the rank of Lieutenant, which he held till his death.

Photo: An African Union soldier from Uganda guards base in Mogadishu