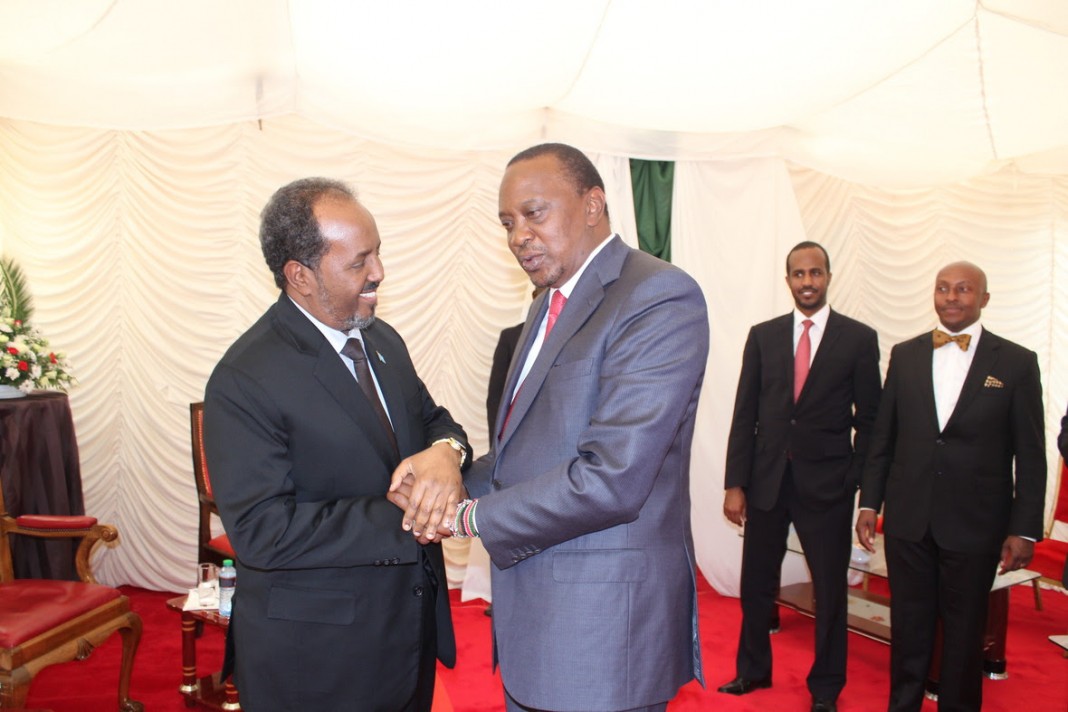 NAIROBI (HAN) January 29, 2016 – Public Diplomacy and Regional Stability Initiatives News. “I have just come to deliver to you one message; I cannot express in words the role of KDF inside Somalia. All I can say is, Thank You Kenya,” were the words of Somalia President Hassan Sheikh Mohamud in recognition of the role that Kenya has played in sheltering refugees and trying to restore order in the war-torn neighbouring state.

The Somali President uttered the kind words at Moi Barracks, Eldoret, where President Uhuru Kenyatta led a memorial ceremony in honour of Kenyan soldiers who recently perished in an ambush by Al Shabaab terrorists at El Adde, Somalia.

The Kenya Defence Forces have rescued key areas of Somalia from the hands of Al Shabaab – including Kismayu an important port city – and continues to support the Somali Government.

This adversely weakened the militia since they used to trade in charcoal business and receive weaponry through the port city.

On this day, Somali President, whose government was initially formed and run in Kenya, expressed optimism that Al Shabaab was losing ground.

“Kenyans will remain and the Al Shabaab will end and they will end soon,” he said.

KDF soldiers working under AMISOM continue to fight the militia who had controlled key areas in Somalia for decades before the entry of the soldiers.

President Mohamud recounted how after the fateful day when Kenyan soldiers were attacked, the Al-Shabaab also attacked Somali nationals who were celebrating at a graduation ceremony.

“Among them was a mother who was fully dressed in line with the Islamic principles and had a 2- year-old kid. That mother was killed and the baby was killed,” he remorsefully said cautioning that,” this is the kind of enemy we are facing today. We will defeat them.”

And even to affirm his statement, he assured President Kenyatta that: “The people of these great nations will remain and the terrorist will end.”

The war on terror is global and the three countries; Kenya, Somalia and Nigeria have agreed to combine efforts in the fight against terrorism.

The Nigerian President, who said that he had received the news of the attack “with anguish and pain”, said terrorist must not be allowed to continue “to inflict pain and misery on innocent civilian and security personnel alike.”

Nigeria has had it ‘painful share’ resulting from Boko Haram terrorist.