Home frontpage Somalia: Successful Electoral process will not only be a victory 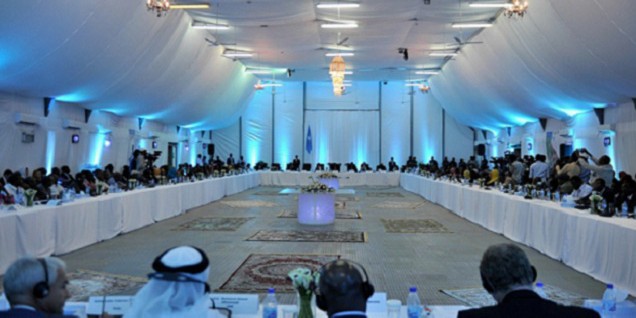 A successful electoral process will not only be a victory for Somalia but also the African Union and the international community, the Special Representative of the Chairperson of African Union Commission for Somalia (SRCC), Ambassador Francisco Madeira has said.

Ambassador Madeira noted that the political progress in Somalia was testament to what can be achieved through cooperation among members of the international community in tackling terrorism as a global threat and not an isolated problem in Somalia.

The head of AMISOM made the remarks at a media briefing held in Mogadishu, today, which was also attended by the Deputy Special Representative of the Chairperson of African Union Commission for Somalia (DSRCC), Lydia Wanyoto; the AMISOM Force Commander, Lieutenant General Osman Noor Soubagleh and the AMISOM Deputy Police Commissioner, Christine Alalo.

The SRCC congratulated the Federal Government of Somalia, the regional leaders and the people of Somalia, for agreeing on the 2016 electoral process timetable. He reiterated that AMISOM will work together with the Somali National Security Forces to ensure the process is successful.

“I would like to stress the commitment of the African Union to support the Federal Government of Somalia and work with the Somali National Security Forces in securing the forthcoming election, while providing the necessary technical support to the ongoing process. The African Union sent a pre-election assessment mission and after meeting the relevant bodies including the Federal Indirect Electoral Implementation Team (FIEIT), it has committed to provide training not only to members of FIET but also to all those who will be involved in the process, as well as providing observer teams for the elections,” stated Madeira.

The SRCC stressed that efforts will be intensified to hunt down and defeat Al-Shabaab militants, adding that special focus will be on clearing main supply routes, to open up rural areas to enable residents move freely.