Home frontpage Somalia: Stumbling Along ‘Bumpy and Difficult’ Path to Peace and Prosperity 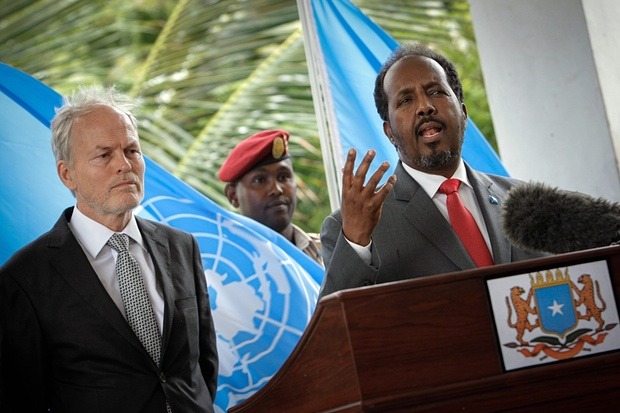 MOGADISHU (HAN) January 25, 2016 – Public Diplomacy and Regional Stability Initiatives News. Despite sporadic, sometimes intense militant attacks, Somalia has been making steady political progress ahead of a planned presidential vote this year, but these tenuous gains will not be consolidated unless the focus switches to debt relief and kickstarting the economy, says the former head of the UN mission.

Nicholas Kay, a British diplomat, was the UN secretary general’s special representative to Somalia from mid-2013 until December. During his tenure, the Horn of Africa country sought to fine-tune its federal system, which is meant to take some of the sting out of the clan rivalries that have poisoned politics for more than two decades and complicated the war against al-Shabaab militants.

“The political and security progress the country has made will be at risk unless there are enhanced economic opportunities and livelihoods for the massively young population,” Kay said after returning to London at the end of last year.

“The needs are enormous. The infrastructure is destroyed. There is no real functioning road system, the ports are in poor shape, there is no national electricity supply grid,” he added.

Somalia cannot qualify for debt relief under the heavily indebted poor countries initiative because it has longstanding arrears. Kay said the priority is to sign up to an International Monetary Fund-monitored programme, and start working towards achieving the governance and transparency goals needed to qualify for debt relief.

Last July, the IMF carried out its first economic consultation with Somalia since 1989. It said the economy, driven by agriculture – including livestock exports, construction and telecommunications – grew by 3.7% in 2014. The IMF forecast growth of 2.7% for last year.

As well as grappling with the economic cost of more than two decades of conflict and a 2011 famine, Somalia, like many war economies, is hamstrung by endemic corruption that will have to be tackled to unlock finance.

“I hope that political will will be there, because the crisis that Somalia was in three years ago could well return unless there is a viable economic horizon for its young people,” said Kay.

Last year, President Hassan Sheikh Mohamud conceded there was no way a popular vote to choose a new president could take place yet in a country where militants still control significant territory, and where 4.9 million people still need assistance, with 1.1 million internally displaced.

In 2012, Mohamud was elected president by MPs who were in turn nominated by tribal elders. Kay said that, despite similarities, the process would be “significantly more inclusive and representative” this time, although the details are still being discussed by politicians.

“There will be representatives of civil society, women, youth. The total number of people voting for selecting the members of parliament will be in the thousands, between 5,000 and 10,000, yet to be decided. It will be … much less easy to influence through payments or whatever,” he said.

Kay said ongoing efforts to create a federal structure for the country were a “huge task of political engineering”, but a wise choice by the Somali people.

“I can see very little other prospect of reconstituting a strong, united Somalia other than through some kind of devolution,” Kay said. “None of this is … a smooth, asphalted superhighway to peace and prosperity. It’s bumpy and difficult,” he said.

One of the biggest bumps in the road is the war against al-Shabaab, who mostly withdrew from Mogadishu in 2011 but still carry out attacks in the city and against African Union peacekeepers across the country. This month, al-Shabaab attacked a base near the Kenyan border, claiming to have killed more than 100 Kenyan soldiers belonging to the AU’s Amisom force. Kenya did not give details on casualties.

Kay, who was speaking before that attack, said internal rifts and battlefield losses to Amisom had significantly weakened al-Shabaab.

“Al-Shabaab is not defeated but it does not pose an existential or strategic threat in Somalia,” Kay said. Instead of foreign fighters flocking to join its ranks, some are leaving, while there has also been a destructive split between those who want to swear allegiance to Islamic State and those who want to stick with al-Qaida.

“It would be a threat and a setback if Isis gained a significant foothold in Somalia and if that resulted in significant new funding or sources of recruits and material. It’s far too early to say whether that is going to happen,” Kay said.

Kay admitted that the Amisom campaign against al-Shabaab had been done “on the cheap”. Some analysts have pointed out that while Amisom has pushed the militants out of much territory, it lacks operational capacity – including helicopters – to hold that ground.

“In 2016, there will need to be quite a hard look at what international partners collectively are doing, to identify whether it is sufficient in quantity and whether qualitatively it is properly coordinated and delivered to best effect,” Kay said. Providing support to the nascent national army – long blighted by lack of discipline and poor salaries – is critical.

For Kay, the most urgent task is to keep Somalia in the world’s thoughts.

“The biggest mistake the international community could make would be to say, ‘Oh, Somalia, job done. Politics and security are reasonably OK and now we can turn our attention elsewhere’. Well, politics and security still need more work and to sustain that, it does need a viable economic recovery plan.”