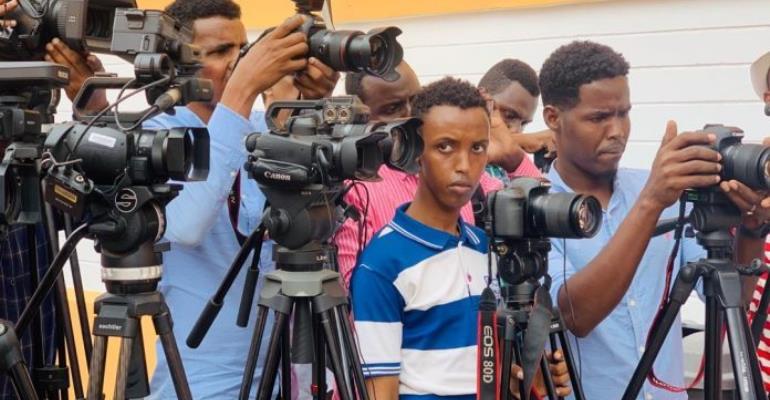 Somali Journalists Syndicate (SJS) expresses its concern about the increasing intimidation, censorship and threats against independent journalists and media in Somalia ahead of the country’s general elections.

“As Somalia heads to a heavily disputed election , we have witnessed how state officials, who are blindly trying to enforce the media law, are increasingly scrutinizing media reporting and have even publicly declared that they will not allow any critical voices. We call for this to stop,” Abdalle Ahmed Mumin, the secretary general of Somali Journalists Syndicate (SJS) said.

In the past few months, state security forces have responded to critical press coverage with harassment, arbitrary arrests, and threats mainly by the National Intelligence and Security Agency (NISA).

More than ever, an independent media is crucial for Somalia and its people to hold free and fair elections and therefore SJS reminds all political parties to respect free expression and media rights as enshrined in the Provisional Somali Constitution and international human rights law.

“We call for authorities to put their intent to implement the repressive media law on hold. Media and journalists should be allowed to independently report all views from all parties including the information regarding mismanagement of election, fraud and abuses against women candidates without fear of reprisals,” Mr. Mumin adds.

International human rights barrister Michael Polak earlier this year submitted communications to the United Nations Independent Expert on the Situation of Human Rights in Somalia, the Human Rights Council, and the UN Special Rapporteur on Freedom of Opinion and Expression on behalf of the SJS in regards to the constant attacks and repression faced by journalists in Somalia as we as the potential implementation of the Media Law.

He states “the Media Law has been drafted in such a way so as to establish complete government control over all aspects of the press in Somalia and this is a grave danger to freedom of expression. Somalia’s international partners must reiterate the importance of a free press and the government should work with international experts to ensure that any regulation complies with international best practice and Somalia’s obligations under international law and the Somalian Constitution.”

SJS calls for members of the international community and the local and international civil society to stand in solidarity with free press and protection of journalists in Somalia before, during and after the election. Those responsible or known to have committed abuses against journalists should not be allowed to get away with it.