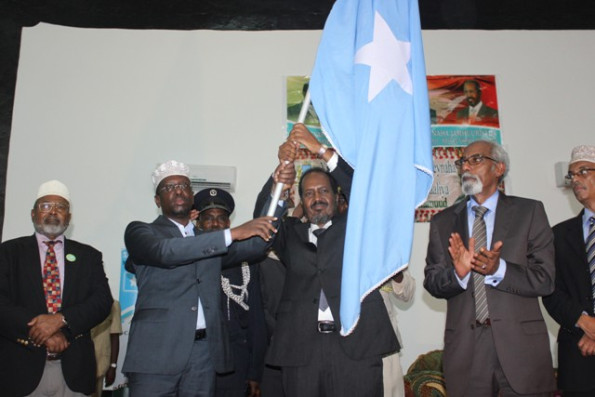 Kampala (HAN) August 19th, 2017 – Public Diplomacy & Regional Security.
One has been the country’s president for four years, the other defeated him in a surprise vote that dashed his high hopes for winning a second term presidency, igniting a long-running personal conflicts and bitter political rivalry between the two men that lasted nearly five years.

Finally came a moment when the two former leaders Hassan Sheikh Mohamud and Sharif Sheikh Ahmed who would be in attendance for a social gathering in Kampala for the first time that they had to set eyes on each other nearly a year later.

But unlike the last time when the two would have perhaps never wanted to talk to each other again, this time, their first taste of closeness came by surprise, thanks to a lavish wedding party in the Ugandan capital last week of which they were honorable guests, with their friends troubled by their broken relations have succeeded in bring them together again.

In an unexpected twist, they walk towards each others with broad smiles, taking handshakes and grab a separate seat, making it together alone face-to-face in a step that former foes do not usually take.

As relations between the two former president got warmer now, the two former rivals may apparently have in common that will divide them– joining forces in an unprecedented alliance.

Their meeting and alliance also strongly highlights Somalia’s political culture, where once rival politics often seek reconciliations in the interest of their political ambitions.

Meanwhile, political analysts raised the possibility of possible challenges that an alliance by such powerful politicians can pose to the current Somali president Mohamed Abdullahi Mohaed who defeated both men in Feb 8 presidential election.

With their own separate political parties, Mr. Mohamud and Mr. Ahmed may be trying to strategize their new political alliance, in likely scenario which could see them riding on the government’s failure to honor its election pledges including curbing corruption, pacifying the capital in its first year and creating jobs.

However, president Mohamed may not be worried by the alliance seen by many as a significant step towards forming a strong political opposition much, but rather by the influence the two men could exert in the parliament, using a large number of loyal MPs supporting them that may challenge his rule.

The use of impeachment against president is deeply embedded in Somalia’s politics.

For years, Somali lawmakers have repeatedly initiated impeachment proceedings against sitting presidents. Several presidents had been voted out in the process.

Regardless of the new political alliance, both politicians will have to re-energize their political foothold and must ensure that they retain senior patronage and influence in the country’s politics.