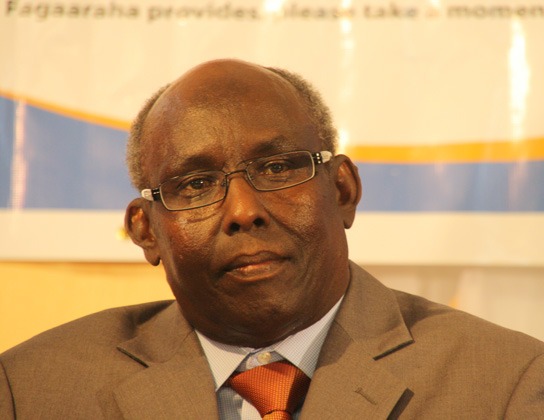 Djibouti (HAN) May 9, 2014 – Regular Expert Analysis Contributors, Your Power & Regional Influence Magazine: Opinion Paper by Mohamud M Uluso. Despite the troubling silence of African, Islamic, and Western leaders about the Kenya government’s brutal human rights violations against the Somali community in Kenya for their ethnic background and about its unlawful military and diplomatic actions in Jubba regions of Somalia, a glimmer of hope emerged in April when two Nordic diplomats renewed a focus on peacebuilding and state-building in Somalia. Donor Powers have been challenged to end the indirect rule, occupation, and containment, and seriously support state-building in Somalia. Continuation of current transgressive interactions between neighboring and other foreign countries and Somali clan enclave and city presidents and mayors flouts Somalia’s sovereignty, independence, and unity and undermines state-building objective central to Somalia’s peaceful existence and prosperity.

H. E. Pekka Havvisto, Minister of International Development of Finland and Co-chairperson of the Forum for International Dialogue on Peacebuilding and State-building (IDPS) and Jens Mjaugedal, Special Envoy of Norway for Somalia have called on donor powers to effectively honor their commitments for state-building in Somalia as mandated by UN Security Council. Immediately, in dissension, Ken Menkhaus, professor of political science at Davidson College in North Carolina, USA, specialist on Horn of Africa and an affiliate of Nordic Africa Institute in Uppsala, Sweden, came out forcefully against the wisdom and viability of state-building in Somalia. Thus, the glimmer of hope for state-building is under attack.

On April 10,  at a roundtable discussion on peacebuilding and state-building in the Horn of Africa held at Woodrow Wilson Center in Washington, D.C., Pekka Havvisto has articulated the critical need to implement the goals and principles  of the New Deal for Engagement in Conflict Affected and Fragile States agreed upon in Busan, Republic of Korea, in 2011. The five goals of the New Deal for state-building , namely political legitimacy and inclusivity, people’s security, system of justice, economic foundations, revenue and fair delivery services, have been developed through collaborative consultations between international donors, g7+ (19 conflict affected and fragile states), the international Network on Conflict and Fragility (INCAF) and Civil Society Secretariats under the leadership of IDPS Forum. Furthermore, the New Deal incorporates the five principles for Aid Effectiveness: ownership, alignment, harmonization, results, and mutual accountability on the basis of normative relations between donors and recipients.

Minister Pekka reiterated the fundamental principles of the New Deal which require countries and citizens of g7+ to take the lead and have ownership of the process of state-building and adopt a social contract (constitution) which binds the citizens and State. This ownership should be manifestly respected and supported by donor powers.

Particularly for Somalia where the foundations of governance are compledly missing, Minister Pekka contended that the constitution making process, the strong interests of neighboring countries in Somalia and the international community’s limited interest in security did undercut the takeoff of the New Deal. To preempt any possible question over the primacy between informal and formal institutions, he asserted that both institutions exist side by side in the Horn of Africa countries. In summary, his message was to promote the understanding and adoption of the New Deal for fragile states.

On April 17, in conversation with Peter Fabricious, foreign editor of Independent Newspapers in South Africa, Norway Special Envoy for Somalia Jens Mjaugedal repeated the views expressed by the Minister of Finland. He was particularly disturbed by how donor powers were far from grasping the reality of Somalia and wasting precious time in discussing issues peripheral to state-building in a warzone. He unambiguously suggested that donor powers need to conduct internal triage before they embark on state-building. He pointed out that the funding of UN programs is not contributing to the vital overall aim of establishing the capacity, credibility, and relevance of the Somali government.

For example, he cited that the Somali government is unable to pay salaries to eight thousand civil servants because donor powers did not disburse one dollar out of the $2.3 billion pledged at Brussels Conference in September 2013. It is also hard not to despair in the face of the level of suffering subjected to the Somali National Army who carries the burden of the war against Al Shabab. Somali Soldiers do not get the one twelfth (1/12) of the stipend regularly paid to each AMISOM soldier. At the same time they are deprived of basic care even in case of casualty.

Jens Mjaugedal did not advocate the release of large sum or Marshall Plan. He appealed for the release of less than 5 % of $ 2.3 billion. The three-year new deal pledge is far less than a two year Capital Appeal Process (CAP) budgets used to be managed exclusively by International Aid Agencies as caretaker government for Somalia in the past 20 years.

Jens Mjaugedal stated that “Somalia is the one of the most privatized countries in the world,” which means Somalia is without State authority. Similarly, Professor Michael J Boyle said that Somalia’s conflict has been globalized. Thus, state-building in Somalia is an urgent matter for the purpose of international peace and security.  History will remember the Nordic diplomats for their bold actions of bringing the true reality of Somalia to the attention of everyone. Somali leaders failed to reflect and act upon the reality of their people and country.

With regard to the endemic corruption labelled against Somali leaders, the source is from the anti-state-building strategy pursued by powerful foreign actors involved in the internal politics of Somalia. Today, majority of the Somali people believe that they lost control, ownership, and freedom of determining their own future to outside forces. This feeling could produce disastrous backlash for all.

Before presenting and commenting the dissenting argument of Professor Ken Menkhaus, I like to mention below three instructive points the General Secretary of the g7+, Helder da Costa, made in a letter published in the guardian newspaper in April 2014 under the title “New Deal for fragile states needs time and political commitment to flourish.”

On 29 April, Professor Ken Menkhaus published his dissenting policy note probably intended to delight the US Administration concerned with security and not with state-building. The Media briefing of May 3 on Secretary of State John Kerry meeting with President Hassan Sheikh Mohamud of Somalia in Addis Ababa, Ethiopia, indicates US Administration’s ambiguity on state-building in Somalia. While US Administration accorded diplomatic recognition to the federal government of Somalia, it also allowed regional actors to dishevel Somalia and undermine state-building goals.  This could fuel new political and social tensions if not conflicts.

The title of the dissenting policy note is “If Mayors ruled Somalia-Beyond state-building impasse” which first reinterprets and then dismisses the views expressed by the two Nordic diplomats. Professor Ken Menkhaus’ attempt seems to be part of a larger effort to kill the agenda of the new deal after the crisis and abysmal performance of Somalia, South Sudan, and the Democratic Republic of Congo. Unfortunately, Somalia – the classic example of failed states- has also become quickly an example for state-building failure.

Consistently, Professor Ken has been arguing against the restoration of the Somali State that collapsed in January 1991 on the basis of his selective, embellished, and recycled narratives not subjected to rigorous academic and empirical research and analysis. He confidently predicts that “with or without the $2.3 billion in new deal assistance, Somalia’s government will remain weak and fragile for years to come.” His intense pursue of promoting “hybrid governance in Somalia” is shaped by his following findings against the South Central Somalia:

On August 8, 2012, few days after the approval of the provisional constitution which ended the transition period and established a permanent government, Professor Ken Menkhaus published a paper titled, “Somalia’s 20-Year Experiment in Hybrid Governance,” in which he argued that Somali State cannot be reconstituted in the foreseeable future and then, he listed the arguments of four schools of thought about the relevance of informal governance system (hybrid governance) in Somalia. As one of the multiple synonymous terms of the concept of “hybrid governance,” he settled on “Municipality governance (city-state)” ruled by Mayors. It is not clear if the concepts of secession and separation of communities are integral part of hybrid governance which considers the discussion of national constitution premature subject.

The description associated with municipality governances as location for multiple clans, best governance for law and order, or basic service delivery defies reality, economics, demography, legitimacy, security, and politics and is far from empirical truths. Also, the claim that accountability is stronger in most municipalities for proximity to citizens is also demonstrably weak.

However, it is possible that under certain circumstances cities and towns are less encumbered by clan disputes simply because one sub sub clan dominates in each city. But it is hard to see how external assistance denied to a national government could be channeled to municipal administrations given the rules governing foreign aid, and how INGOs assistance will improve the livelihood of war devastated and fragmented country.

It is academically dishonest to argue that donor powers have ever seriously attempted to peacebuilding and state-building in Somalia. In fact, Dr. Michael J. Boyle noted that “Somalia has played the part-both in political practice and political myth- of a testing ground in which states play out their fantasies out of political order. The consequence is that Somalia, as a real place with real people, has rarely been seen on its own terms.” Therefore, the foreign driven political initiatives in the last 12 years were far more lucrative projects to donor agencies and their bureaucrats compare to Somali Elites.

Following a workshop organized by the London School of Economics and Political Science in collaboration with the University of Antwerp on Hybrid Governance, Professors Kate Meagher, Tom De Herdt, and Kristof Titeca have published  a briefing article titled, “ Hybrid governance in Africa: Buzzword or paradigm shift?,”  in the African Argument website. The article presents long list of yet to be answered questions about this new concept sold as “practical and legitimate governance that works.” The questions include the role of academics as promoters or investigators of the new concept, or the powers that create the hybrid governance when good governance norms have been disregarded, or if hybrid governance enhances the performance and legitimacy of the state or erodes them. The professors cautioned against the assumption that all informal institutions are locally legitimate by definition as a misreading of local realities.

Another unanswered question is how hybrid governance deals with public accountability and citizenship rights. The participants of the workshop noted the growing evidence that hybrid governance does not always represent good synergistic arrangement between weak (fragile) states and local institutions. The scholars who attended the workshop advised the academics promoting hybrid governance to exercise prudence so that they do not get their hand deep in the dirty. The consensus on addressing the problems of fragile states is well spelled out in the New Deal partnership for effective international development cooperation between donor powers and fragile states.