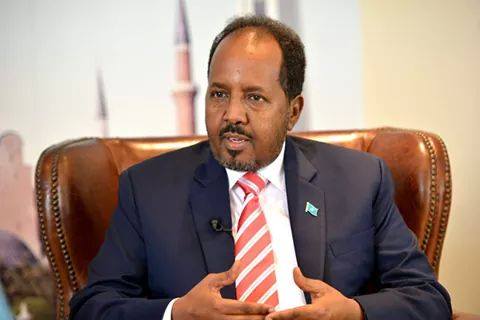 MOGADISHU (HAN) April 7. 2016. Public Diplomacy & Regional Security News. The President of the Federal Republic of Somalia, Hassan Sheikh Mohamud and HE the Prime Minister of the Federal Republic of Somalia, Omar Abdirashid Ali Sharmarke, praised the efforts of the CVE Coordinator Hon Mustafa Duhulow and all stakeholders for their consultative meetings to develop a comprehensive Nationwide Strategy for Countering Violent Extremism (CVE).

A member of parliment, Mustafa Duhulow, CVE Coordinator for the Government of Somalia hailed the commitment and determination from Somali leaders and said “I cannot thank enough the encouragement, commitment and determination of the President and the Prime Minister of Somalia to the establishment of an inclusive National CVE Strategy, focused on preventing future radicalization and recruitment of violent extremists in the country.

Mr. Duhulow also noted that the work of delivering the National CVE Strategy is now underway and thanked the European Union and Blueprint Somalia for their efforts in this matter. After a series of consultations for the last few months and discussions on 4th and 5th of April 2016 an executive meeting of key decision makers in Mogadishu with representatives from regions including, Banadir, GalMudug, Jubbaland, Puntland and South West State took place in Mogadishu. Representatives from key Ministries also participated, including the Ministries of Information, Security, Women, Youth, Religious Affairs and Justice as well as the Director of Rehabilitation Centre for Defectors. Hon Duhulow stressed that in order to reach the people at the community level, the consultation of the development of the national strategy on CVE will, importantly, include civil society groups during the consultation and drafting of the National CVE Strategy. He also stressed that all segments of society, including religious leaders, youth and women must be given the opportunity to take part the discussions and subsequent implementation.

Mr.  Duhulow asked all concerned parties to take part in the national discussion and debate to countering violent extremism and to support the development of the national strategy on CVE in Somalia. With a clear and inclusive strategy to guide it, a CVE Centre could be well positioned to act as a hub for implementing that strategy with the necessary research, training, coordination and delivery mechanisms, delivering effective programmes that genuinely address violent extremism in Somalia. A credible voices from our Ulumas, religious scholars /leaders are vital to the public awareness campaign on CVE towards the right path (Tubta Toosan).

Mr.  Duhulow concluded: “Countering violent extremism requires determination and our collective commitment. We need all agencies involved, including the institutions of government, the Federal member states and civil society groups to work together as a team. The success of the National CVE Strategy will depend on cooperation built on public trust with our society working together as partners for a more secure Somalia.”