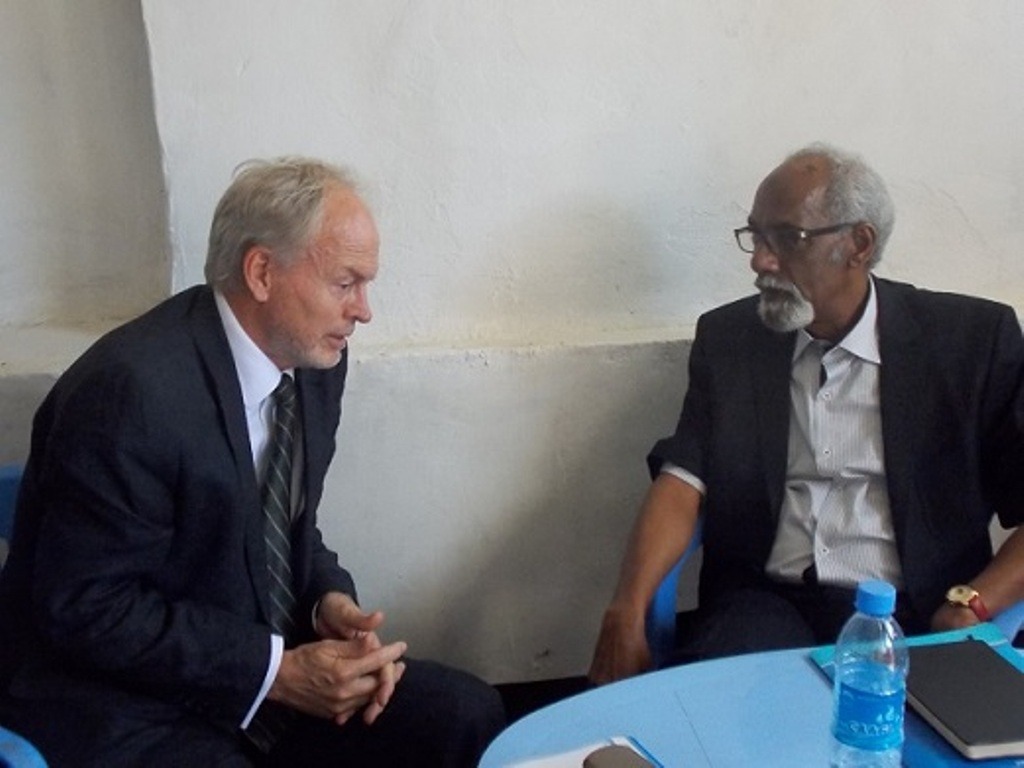 “I am concerned about allegations of some MPs being asked to exchange votes for cash in the context of a potential ‘No Confidence’ motion, which is a disservice to Somalia’s progress towards accountability and transparency,” said Nicholas Kay, the U.N.’s representative to Somalia. “Somalia and Somalis deserve better.”

“It’s more of a step backward and a call for the return of war,” said Abdullahi Ali, a cafe owner in Mogadishu. “It’s really worrying.”
Press Release of The Concerned Somali Parliamentarians regarding the Statement of Nicholas Kay, The Special Representative of the Secretary General of the United Nations to Somalia.

Kenyan diplomat who had earlier served as the Kenyan Ambassador to Somalia failed to mediate :

“IGAD is the midwife of the Somali peace process throughout the two decades of civil war. We are concerned that this political pushing and shoving may derail the progress being enjoyed in Somalia today,” IGAD envoy Mohamed Affey

The Somalia’s president responded quickly  with a strong statement reply that can be summed up in two words: Butt out.

We (Somali Parliamentarians), the undersigned members of the Somali Federal Parliament, composed of over 130 MPs are deeply concerned about the undiplomatic statement uttered by Ambassador Nicholas Kay, The Special Representative of the UN Secretary-General (SRSG) for Somalia and dated November 2, 2014. It is a statement unbecoming of the most senior diplomat working on the behest of the most credible international partner of Somalia, the United Nations.

In a press release by the Special Representative of the UN Secretary-General (SRSG) for Somalia, Nicholas Kay and dated November 2, 2014, regarding the current political misunderstanding between the Somali leadership, the Ambassador is quoted as saying:

“I call on all parties to seek a mutually satisfactory compromise that will allow Somalia’s political and security progress to continue without
interruption.” He is further quoted to saying: “I recognize the dedication and hard work of Members of Parliament, but I am concerned about allegations of some MPs being asked to exchange votes for cash in the context of a potential ‘No Confidence’ motion, which is a disservice to Somalia’s progress towards accountability and transparency,” he added.

While we appreciate the International Partners’ commitment to assist Somalia succeed in its peace and state building goals, we are deeply
concerned about the tone and tenor of the above-mentioned statement attributed to Ambassador Kay and dated November 3,2014, which statement is clearly directed at Somali sovereign institutions.

As Somali Parliamentarians, we acknowledge the partnership we have fostered with the international community going over the years and the
international communities’ assistance to Somalia during the past 24 years of statelessness. We are very grateful for that and we thank the international community for that assistance. Together, we have made great strives despite the odds: We have built nascent but still fragile institutions in the area of security, democratization; peace building and have also drew up a blue-print for the development, strengthening and consolidation of the standing-up of these institutions. We have done all of this with the partnership of the United Nations and its partners institutions and countries

It should be made clear that Somalia no longer has a transitional government and a temporary charter, but that it has a permanent government anchored on constitutional foundations.

While the United Nations was mandated to facilitate the political processes aimed at ending the transition in the past few years, it would be imprudent for it to continue interfering in the internal affairs of Somali institutions at a time when these institutions are no longer transitional in nature.

The Somali Federal Provisional Federal Constitution provides for mechanisms of resolving political disputes within the existing Somali
institutions, especially within the framework of parliamentary and judicial processes. These institutions demonstrated time and again their maturity through having carried out a non- confidence vote against a sitting Prime Minister and the endorsement of a new government in 2013, without the assistance or interference of non- Somali entities or institutions.

We further caution the International Partners against making unfounded allegations and urge it to refrain from issuing veiled threats against
parliamentarians exercising their constitutional and democratic duties and responsibilities as provided for under the Provisional Federal Constitution.

We remind our international partners that the sovereignty of Somalia rests with its citizens and by extension with the House of the People whose members are representatives of the citizens of Somalia.

We, the undersigned members of the Somali Federal Parliament strongly advise the Special Representative of the UN Secretary-General (SRSG) for Somalia, Ambassador Nicholas Kay to refrain from making un-diplomatic, outrageous and inflammatory remarks, remarks that may contribute to more political harm than good. We also advise him that he takes care not to carelessly wade into the internal political issues of Somalia and also refrain from maligning the personal integrity of Somali politicians and most importantly Somali parliamentarians.

We counsel the Special Representative of the UN Secretary-General (SRSG) for Somalia, Nicholas Kay to play a constructive role in the on-going dialogue in the reconstitution of the Somali state.

Finally, we advise the highest Executive organ of the Somali state to
exercise its appropriate diplomatic prerogatives and take Ambassador Kay to task and hold him accountable for his politically reckless remarks