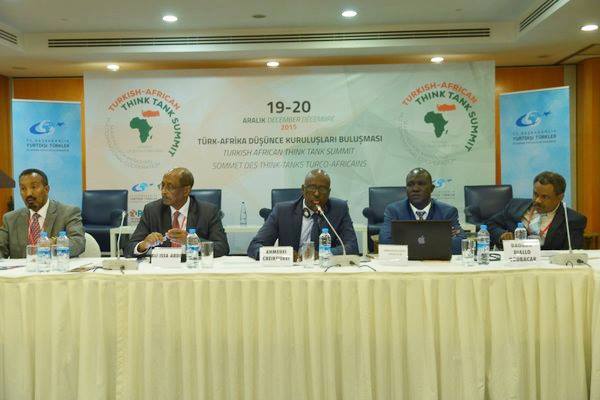 MOGADISHU (HAN) December 21, 2015 – Public Diplomacy and Regional Stability Initiatives News. Sunday in Istanbul, the Association of Researchers on the Middle East and Africa (ORDAF) with the cooperation of the Presidency of Turks Abroad and Related Communities (YTB) held a Turkish-African think tank summit. Several researchers from different think tanks who study Africa, journalists, academics and politicians attended the summit.

The summit is considered significant in terms of highlighting the increase in Turkish activity in Africa and Turkey’s changing policy toward countries on the continent. Experts underlined that African countries and Turkey need each other, as Turkey can offer a lot in many areas from construction to health, while African countries, which suffered from colonialism for centuries, can trust Turkey’s sincere approach, which does not contain colonial aims.

The two-day summit started with opening remarks by Deputy Prime Minister Yalçın Akdoğan. Akdoğan stressed the links between the Ottoman Empire and African nations and said, “As descendants of the empire and citizens of Turkey, we consider the peoples of Africa as our brothers and sisters.” Criticizing the former colonial powers, he added: “The peoples of Africa have been exploited by colonial powers for centuries. Africans have been dispossessed of their goods — natural resources like oil, gold and diamonds.

Moreover, they were taken to foreign countries to be enslaved.” He said that Turkey’s policy is much different from those colonial powers: “Our civilization, culture and religion ban us from imperialism and racism. We see different colors and ethnicities as wealth. For us, there is no difference between white and black. No person is superior to any other. We have never bent our heads in front of anyone. We have been a safe haven for oppressed people regardless of their religion or ethnicity. Turkey has become a hope for oppressed people around the world due to its ethical stance.” After touching on Turkey’s changing policy toward Africa, he reminded participants that President Recep Tayyip Erdoğan declared 2005 as the year of Africa when he was still prime minister.

Since the Justice and Development Party (AK Party) came to power in Turkey in 2002, relations between Turkey and several African countries have strengthened through increasing humanitarian aid, cooperation in several areas and trade. The number of Turkish embassies on the continent increased to 43 as of 2015, up from 12 in 2003. The number of African countries’ embassies also increased in the same period to 53, up from 10 in 2008.

Turkish Airlines (THY) has also started flying to more destinations in Africa. In 2002, THY only flew to 10 destinations in Africa, but now it flies to 47. As such, the number of passengers has also increased. While it was less than 150,000 in 2002, it is now more than 2 million per year. The abolishment of visas with eight African countries and the opportunity to receive visas upon arrival in six countries has also played a big role in the increase in passenger numbers.

The changing policy has also offered new opportunities for both Turkish and African businessmen. The trade budget with the continent passed $25 billion, up eightfold from 13 years ago. Ankara has signed economic cooperation agreements with 38 countries and has established free economic zones with four.

Turkey also continues increasing humanitarian aid and the Turkish Cooperation and Coordination Agency (TİKA) has opened 16 offices and launched more than 200 projects. The Disaster and Emergency Management Authority (AFAD) has provided $100 billion of humanitarian aid to Somalia and $1.5 million for combating Ebola.

Experts at the summit underlined the importance of African countries for Turkey and said that Africa offers a big opportunity for Turkish entrepreneurs to increase trade. Turkey, which aims to increase investments abroad, can feed the needs of Africa, while the continent can benefit from Turkey’s sincerity and approach, which is far from colonial behaviors, the experts said.

ORDAF, in a statement issued for this summit, explained the process of improvement in Turkish-African relations and said: “With the acceptance of the Africa Action Plan in 1998, the Republic of Turkey transformed its interest in Africa to a strategic state policy and started to apply trade incentives in this direction to increase its trade volume. The engagement with Africa that started in 1998 to establish a state strategy became more evident in 2005 with the declaration of the Year for Africa in Turkey.

Since 2005, opportunities for creating equal level cooperation between Turkey and African countries have been enabled. The first aim in this direction was to increase the number of Turkish diplomatic missions in Africa. The Republic of Turkey, with the Turkey-Africa Cooperation Summits, the first of which was in August 2008 and the second in November 2014, manifested its desire to increase the level of cooperation with all African countries.

In 2010 Ankara accepted its Africa Strategic Document. With this document Ankara put forward its approach of “solidarity for a common future.” It explained what should be done in the near future and read: “The steps that have been taken by Turkey as a state strategy have to expand into the civil level of cooperation for them to become more established and to be carried into the future. In fact, it is more important to prioritize civil cooperation for the future of Turkish-African relations.” Source: dailysabah