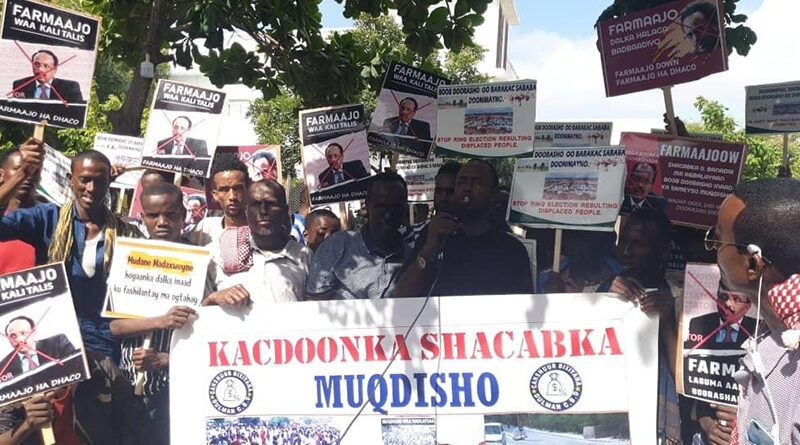 Share on Facebook
Tweet on Twitter
It hardly comes as a surprise. When people killed in the streets of Mogadishu. But this time, it is different. Somalia has  experienced for many years violence and unrest. Death and displacement had been the norm for very long time.
To my surprise, things are changing right in front of our eyes . People are learning how to express their frustration in civic manner. They are coming out in a mass to demonstrate peacefully. The strong are defending the country’s fragile democracy with words, not with guns.
Surely, it is a great shift of old behaviour. It is a common knowledge that weapons are available for sale in the black market at a price. There is no shortage of guns to say the least.
Literally, there is some form of weapons in every house. But people decided to leave them behind, and instead, to exercise their democratic rights to object the electoral policy of the current administration in peaceful way…
Many times, the current administration is accused to have resorted to violence and it is also accused  that it is playing with fire by setting up concocted civil society groups to dram up artificial support and campaign to mislead world opinion.
Back to the main point, this is the first time in the recent history people have deliberately chosen to express their feeling democratically. But they face, people whose mentality has not changed much and they think that they can use force to undermine this flourishing democracy.
The real civil society groups are worried that a full blown civil war will start if the elections are managed by disputed electoral committee. Their calls  seem to have fallen into deaf ear.
Somalia’s international partners  remain concerned about on going disagreements over the implementation if upcoming elections. They acknowledged  that discussions and agreements are required to break current impasse.
The prime minister is on mission to bring together Federal State Leaders into a meeting in order to bridge and solve these hot issues in time. It is very difficult assignment. His hand is very weak if he does NOT demonstrate clearly that he is independent from anyone’s influence.  Otherwise, his effort will fail.
It is not a secret that the federal government doesn’t have the support of the people of the federal states and the ones they set up ( South West and Galmudug) are faltering now like Hirshabelle.
It is a matter of urgency to convene that meeting for all stakeholders including the presidential candidates to solve the dispute relating to the election. The opposition groups believe that  president and his team are leading the country into disastrous path… They think that the government  can not  be trusted to manage fair and free elections.
That is why the opposition groups have started new tactics. They encouraged their supports to take the streets and protest peacefully. They are also working other plans including setting up parallel process. They are deep frustration by the inaction of the current admistration and its backers.
Analyst believe that things has reached in  a critical stage and they ought to be stopped before violence erupts
The civil society groups  are pretty sure that  president Farmaajo has passed a REDLINE. Shedding blood will only lead more blood to be shed. They say, “ He has politically bankrupted himself by killing the same people who welcomed him when he was elected for four years ago. It is time for him to go.” The end.