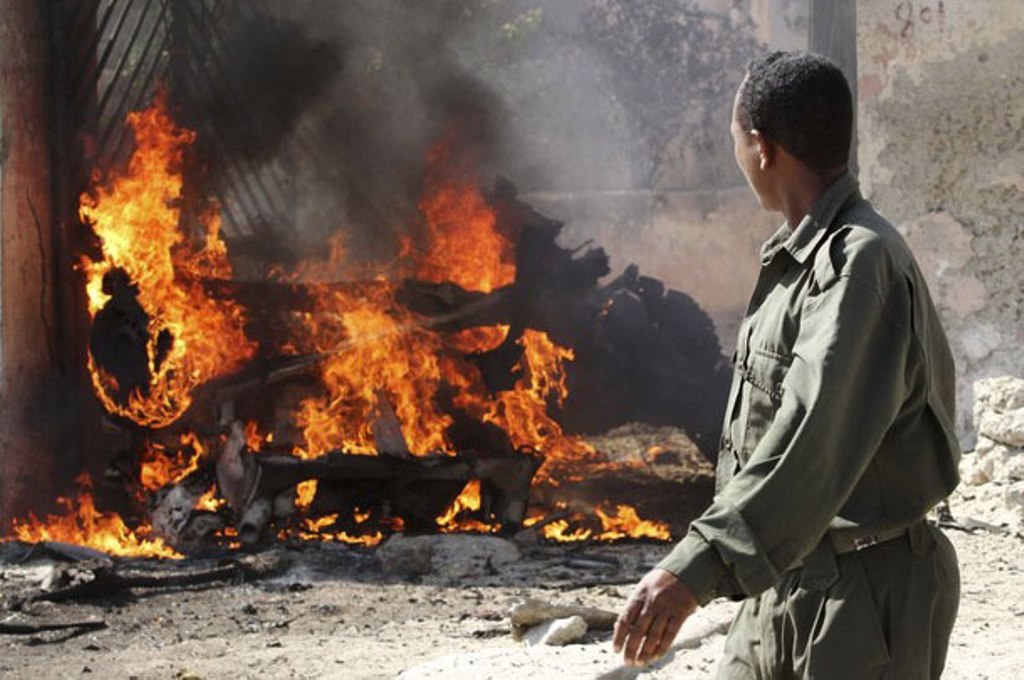 according to Al-shabaab’s Radio Andulus and eyewitness said, Al-Shabab urban warfare group militants in Mogadishu claimed its responsibility for the convoy attack.

The spokesman of Somalia’s National Security Ministry, Mohamed Yusuf said the Security Ministry had information about the convoy attack, and the car bomb was detonated while the attacker was being pursued.

The spokesman of Somalia’s National Security Ministry told Geeska Afrika Online by phone that “We will continue mitigating plans to preventing such targeted attacks, as long as people are working with us, to protect people and serve the nation.”
The special military Alpha Group are part of Somalia’s National intelligence forces and often carry out operations against militants in Somalia.

Al-Shabaab is a Wahabi ultra-Extremist Islamic militant group that is linked to the Global Wahabi terrorist network and wants to run Somalia by its strict interpretation of  Wahabi law. Despite militants suffering huge losses in recent years, including the killing of their leader in a U.S. airstrike earlier this year, Al-Shabaab Wahabi doctrine remains a threat to the region.

African Union troops (AMISOM) supporting Somalia’s National Army have pushed al-Shabab from major strongholds last year, including Mogadishu in 2011. However, al-Shabab fighters still carry out terror attacks in Somalia’s capital and in neighbouring countries that have contributed troops to the African Union Mission to Somalia.

On Christmas day al-Shabab gunmen attacked the main African Union base (AMISOM) in Mogadishu. The AMISOM base hosts U.N. offices and embassies.