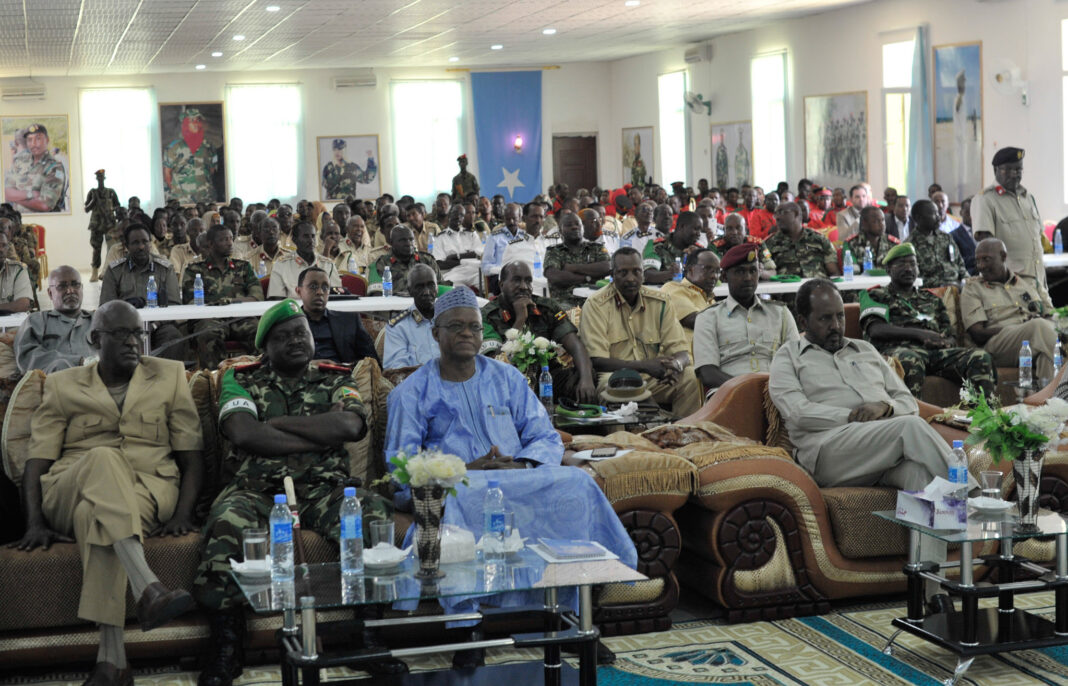 Mogadishu (HAN) October 30, 2014 – Public diplomacy and Africa Security Industry Tracker news. In a briefing for the media in Mogadishu on Monday (October 27) the Special Representative of the Chairperson of the African Union Commission for Somalia and Head of AMISOM, Ambassador Maman S. Sidikou, along with President Mohamud and senior army officers, said that Al-Shabaab militants now only control Jamaame, Jilib, Buale and Sakow in Middle Juba Region, Diinsor in Bay region and Bardere in Gedo region, adding:

“there are also a few other smaller towns like El-Dere in Middle Shabelle.” He said eight militant-held towns had fallen into the hands of the Somali National Army and AMISOM since the start of “Operation Indian Ocean” last month.

The Deputy Chief of the Defense Staff, General Abdirisak, provided a map to show the territorial losses Al-Shabaab had suffered between the beginning of ‘Operation’ Eagle in January 2014 and the continuing military offensive, ‘Operation Indian Ocean’, which began in September. ‘Operation Eagle ‘, he said, had liberated 10 significant towns; ‘Operation Indian Ocean’ had focused on strategic coastal towns and eight towns, including the former Al-Shabaab strongholds of Barawe and Adale, had been liberated.

Indian Ocean operation is the first call mission that the federal government spearheads since AMIOSM operation in the south started and is intended to re-capture main strongholds from Alshabaab.

The Deputy Chief of the Defense Staff, General Abdirisak,  said the strategy which involved disruption of Al-Shabaab supply routes and isolation of pockets of resistance. He said the southern port city of Koday, one of the last few natural seaports still controlled by Al-Shabaab had been recovered only 48 hours earlier. Further towns could be expected to fall shortly.

President Mohamud who said Al-Shabaab had been battered relentlessly and had lost much in terms of men, equipment, weapons and criminal funding opportunities, but he pointed out it had not been annihilated:

“It has scuttled off and is now hiding in dark areas, out of sight for the moment, but desperate to reassert itself.”

Government forces in Somalia backed by African union troops have begun an offensive to dislodge the local armed group Al-Shabaab. Under the new offensive code-named “Indian Ocean”, the east African nation hopes to neutralize the armed group by the end of the year