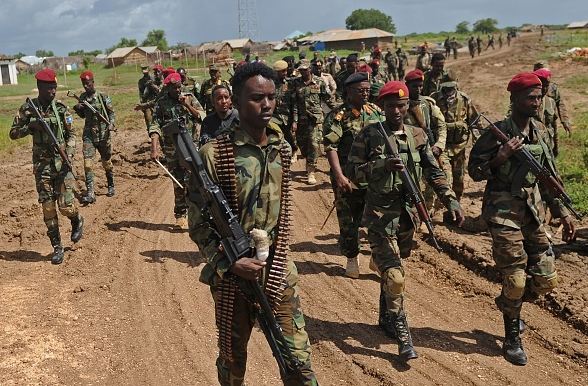 MOGADISHU, Dec. 1 – The Somali government on Tuesday confirmed that its forces killed 51 al-Shabab fighters during the latter’s botched attack on the Somali National Army (SNA) base in the southern region on Monday.

Osman Dubbe, minister for information said six al-Shabab terrorists were also arrested including the mastermind of the attack. The attack also left 15 other people, including soldiers dead.

The government also lauded the civilians who teamed up with the soldiers to defeat the terrorists who had planned to overrun the military base in the southern town of Baladweyne in Mudug region.

“Al-Shabab defeat in yesterday’s (Monday) attack in Baladweyne is a clear example of how the people who stand by the army can easily stop the attacks and plots of the enemy against the Somali nation,” Dubbe said in a statement issued in Mogadishu.

The minister said both the soldiers and the local residents fought bravely to defeat the al-Qaida allied terrorist group which Dubbe termed as the “enemy of the Somali people.”

However, the militant group said its fighters killed 53 government troops and seized six military vehicles including anti-aircraft guns during the Monday morning assault.

The extremist group which is fighting to overthrow the government frequently exaggerates the number of troops/civilians they kill.

The government forces have stepped up operations against al-Shabab extremists in central and southern regions in recent days, but the militants still control swathes of rural areas, conducting ambushes and planting landmines.