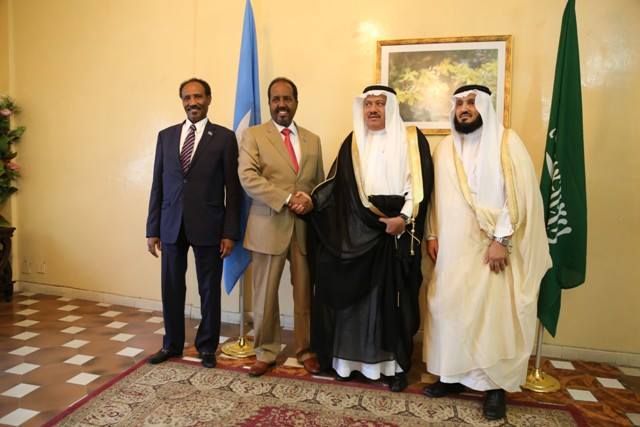 Mogadishu  (HAN) April 19, 2014 -The Somali President Hassan Sheikh Mohamud today welcomed the new Ambassador from the Kingdom of Saudi Arabia to Somalia and said, “Saudi Arabia has been a constant friend to Somalia throughout the years of trouble.”

His Excellency Garam Bin Said Bin Garam Almulhan presented his credentials to the President in Villa Somalia, Mogadishu. Accompanied by Somalia’s Foreign Minister, His Excellency Abdirahman Duale Baileh, the Ambassador pledged his country’s continued support to the ongoing efforts to bring security and stability to Somalia.

The President said: “Our brothers in the Kingdom of Saudi Arabia have been true friends to Somalia. In our time of need, Saudi Arabia has maintained relationship and has consistently provided aid to the Somali people. A recent example of the aid that Saudi Arabia has provided was through the construction of wells at a time when water was in critically short supply.

“The Kingdom of Saudi Arabia is also a close partner in our fight against the misguided and criminal elements that seek to hold Somalia back from the road to peace and progress. Recently the respective Ministers of Defense from Saudi Arabia and Somalia met in Saudi Arabia to discuss cooperation in the fight against terrorism and the rebuilding of our security forces.”

The Ambassador conveyed a personal message from King of Saudi Arabia, King Abdallah Bin Abdulaziz Al Saud, expressing his commitment to strengthening bilateral relations. He concluded his visit with a joint press conference with the Somali Foreign Minister. ENDS

Sources Spokesperson to the President of Somalia