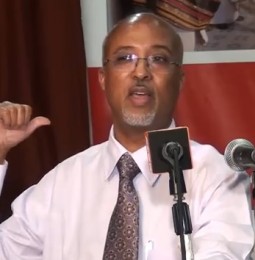 Geeska Afrika Online (HAN) Mar 13, 2014 – By Bashir GothWith the arrest of the notorious Hassan Dahir Aweys, the inevitable defeat and apprehending of Ahmed Abdi Godane, the Joseph Kony of Somalia and his Al-Shabab gang of criminals, and the ongoing Turkish-led momentum to get things right this time, one can confidently say: “Somalia, welcome back.”

Welcome back to the international community; to play your role as a country located in strategic and vital waterways, to restore peace and stability and start the healing process of the people traumatized by more than 20 years of physical and mental torture by criminal and religious warlords and devastated by Al Shabab-made droughts.

Welcome back to dress the wounds, unite divided families, rehabilitate youth from the dark, damp and masked Al Shabab criminal underworld to the bright daylight of fresh air, schools and knowledge. Welcome back to rescue our beautiful religion from the clutches of immoral vultures that dismantled its sublime goals and reduced it to dictums on controlling women’s lingerie.

Oh, what a nightmare! Twenty years of horror, darkness, warlordism, piracy and terrorism.

Now thanks to the African Union, it appears that the restoration of peace and stability is feasible more than ever and that Al Shabab, the worst nightmare that the Somali people had to go through, seems to have gone forever.

It is time to clean up the mess left behind by the years of failure and wars. Time for Aways, Godane, Roobow and their accomplices to be dispatched to the International Criminal Court to face up to the crimes they committed against the Somali people. Apart from the mass killings, tortures and financial coercions, they have created an army of amputees as their legacy; hundreds of young people with limbs cut to satisfy their craving for blood and to entrench their tyranny through fear and ruthlessness. It is time that they have to account for their crimes against humanity. Time to make them answer for the thousands of children they kidnapped and used as gun-fodder and as human bombs; for the humiliation of Somali women they used as guinea pigs for their crazy fatwas by not only restricting their life activities and banning them from earning their livelihoods but also by interfering with their private life and controlling how, when and where they should cover and uncover of their God-given body.

Above all, these criminals should be made to stand trial for turning the areas they controlled in Somalia into concentration camps.

Thank You Sheikh Sharif for Your Leadership

No achievement can be made without capable leadership. And I should say without any reservation that Sheikh Sharif Sheik Ahmed has shown great leadership qualities and has achieved success. The fact that he survived the spitefulness of the plain speaking Somalis who don’t see any good coming from any leader unless he is from their own clan is itself a commendable accomplishment.