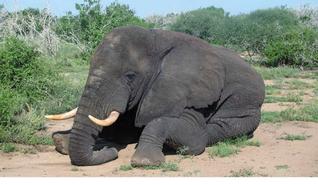 MOGADISHU (HAN) March, 12.2016. Public Diplomacy & Regional Security. An elephant marched hundreds of kilometres from Kenya and crossed the border into Somalia for the first time in 20 years, confirming that elephants continue to survive in the Horn of African nation, according to conservationists.

Morgan, a striking bull elephant in his mid-30s, began an extraordinary 220-km journey on February 16 when he left the Tana river delta in coastal Kenya and began marching “purposefully north”.

The conservationists watching his progress became fascinated with what became one of the most exceptional elephant movements yet recorded.

Iain Douglas-Hamilton of Save the Elephants, the Kenya-based organisation that tracks elephants to assist the Kenya Wildlife Service and others in protecting the nation’s elephants, said Morgan had something in his mind about where he was going.

“That first night he streaked across 20 km of open country, before finding thick bush an hour and a half after dawn. He hid there all day, moving only a couple of kilometres, before resuming his journey at night,” Douglas-Hamilton said in a joint statement, according to Xinhua.

According to the conservationists, Morgan crossed over the Somalia border earlier this month after days of 12-mile marches and nights spent hiding in the forest. Then after about a day of looking fruitlessly for mates, he turned back.

Morgan was collared in December 2015 during an operation. Ian Craig, director of conservation for the Northern Rangelands Trust, said a mature bull like Morgan is not wandering aimlessly, but is likely following a route he learnt earlier in his life. Elephants have been known to survive in the Boni forest on the Kenyan side bordering Somalia, but the thick cover makes them hard to see. No one has been able to check on the Somalia side where the last confirmed sighting was in 1995. Morgan’s survival strategy of hiding in thick bush during the day gives hope that the forest may harbour more elephants than previously thought.IANS

A mature bull-like Morgan is not wandering aimlessly, but is likely following a route that he learnt earlier in his life, one that has been used by elephants for generations.

According to conservationists, an estimated 20,000 elephants lived in the Somalia area during the early 1970s and no one knows how many remain today.