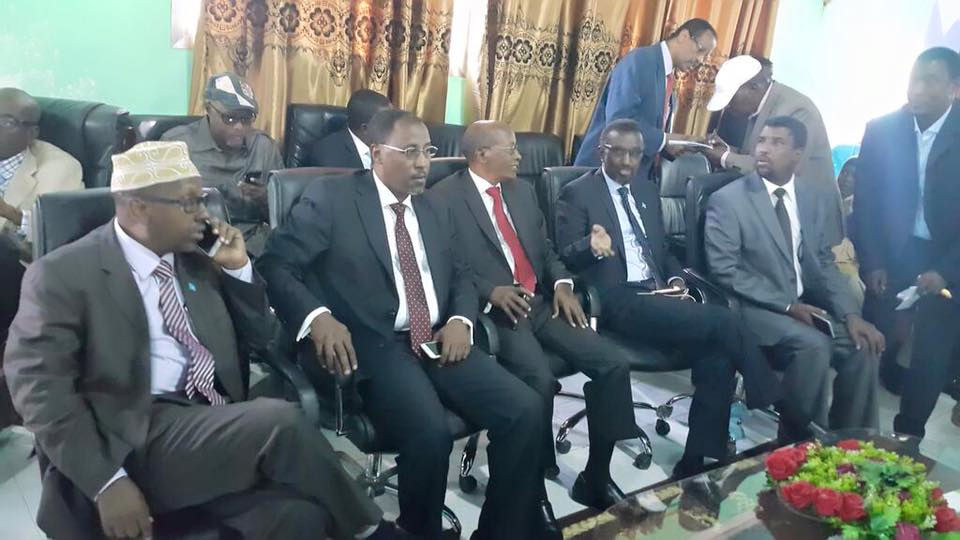 Another number of regional leaders congratulated Abdikarin Hussein Guled on his Elections’ success after he recorded the largest percentage of the total vote in the local regional elections held in Adaado, Central Somalia.

Adaado regional leadership competition has proved that democracy is possible in ‪‎Somalia‬. The process was really transparent, comprehensive, compromising and tough challenges. Gulled garnered 49 votes out of possible 84 as oposed to Ahmed Fiqi´s 40.  After the Galmudug regional parliamentary speaker declared the result, the hall erupted in jubilation as  supporters congratulated the new regional President of Galmudug over the victory.

“This growth of national consciousness is a political Tolerance‬,‪#‎leadership‬,‪#‎responsibility‬,‪#‎acceptance‬,‪#‎Concession‬, ‪#‎winWin‬”

Somali President, Hassan Sheikh Mohamoud told Geeska Afrika Online that, his government is making a comeback. To mark the nation’s independence day and also the new leadership of Central Somalia,  he also spoke about the present political regional security situation, which Adaado regional election, is a symbol and capability of the Federal Government to hold national elections in 2016.

Abdikarin Hussein Guled is the President of GalMudug State of Somalia, but Guled said:

Thanks to Ahmed Moallim Fiqi and Ahmed Abdisalan for making the process more democratic in Central Somalia.

President Abdikarim Hussein Guled is one of the strongest supporters of Federal Government efforts for statehood and he will press for reconciliation between regional leaders and Federal Government — rival groups that run separate administrations in the Southern Somalia regions — calling their division an obstacle to the Federal system to minimize conflicts.

Ismail Omar Ghele of Djibouti also congratulated Abdikarim Hussein Guled on Saturday’s elections and called him “big success for people of Somalia” according to an official statement, saying that, the results of the July 4th elections in Adaado, will assist the peace process between Federal Government and AMISOM forces in Central regions. Ismail said the election was important for “democracy in Somalia to empower security in Central regions and the stability of the public, which will reflect Djibouti vision” in Federal Somalia. “I am sure that the results of the election in Adaad0 will have a positive effect on the peace process in Somalia. I hope the stability and development in Federal Somalia will continue to gain in strength in the Horn of Africa.”

Another acknowledgment came from His Excellency Farah Sheikh Abdulqadir, and added his statement, “celebration in Adaado,  is a “big success” for the people of Central Somalia, as well as Somalia, saying that the results of the elections raise hopes for the “development and welfare of Somalia.”

The new Galmudug regional President faces multiple challenges including peace reconciliation among the communities in central region , security and other key economic issues facing by the people.