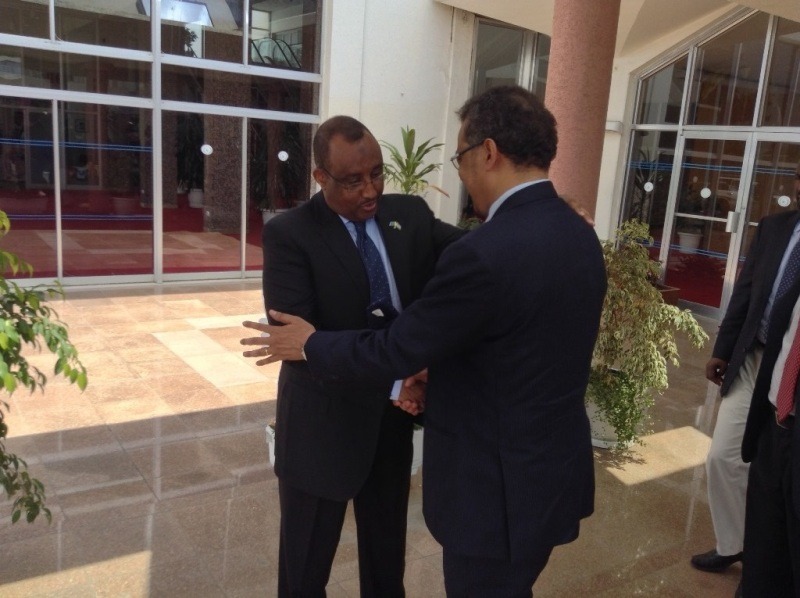 Government spokesman told Geeska Afrika Online by Phone that, Somalia’s chief of intelligence Abdullahi Mohamed Ali, has been fired over what the office of prime minister described  ineffectiveness and lack of intelligence tactics. Abdulahi Mohamed Ali, the former diplomat has been in the office less than two months. This comes as intelligence and security forces storm overnight and shut down radio stations in the capital Mogadishu. Number of journalists and editors were arrested overnight by the government for reporting al-Shabaab’s new leader story.

Somalia has removed its top intelligence official Abdulahi Mohamed Ali while its on high alert following the Monday killing of Al-Shabab’s leader in a U.S. airstrike.

National Security Director Abdulahi Mohamed Ali had only held the post for two months. Abdulahi was appointed in July as part of a major overhaul of Somalia’s security services.

Government spokesman Ridwan Haji Abdiweli announced the firing after a cabinet meeting saying Abdulahi Mohamed Ali failed to fulfill his commitments. No further explanation was given.

The security decision comes as Somali national security officials put the country on high alert after the militant fighters of Al-Shabab confirmed the death of its leader, Ahmed Abdi Godane, in a U.S. airstrike last week

But, source close to the Somali federal presidential palace told Geeska Afrika Online that the Puntland president Abdiweli Mohamed Ali Gas, have submitted a list of demands, including “Chief of National Security Intelligence” as well as “giving them more powers within the public prosecution, accountability panel working with UN representative in Mogadishu, Office of the Prime minister and the federal funding services.

Regional security and Federal issues analysts say the Puntland leaders are trying to establish themselves as the dominant political force in the newly federal states of Somalia; After president Abdiweli Mohamed Ali Gas  was warmly welcomed to Addis Ababa on his first official visit to the Federal Democratic Republic of Ethiopia (Picture).
.
Original Articles Writen and Published by Geeska Afrika Online; Puntland wants to return the Old Status que: