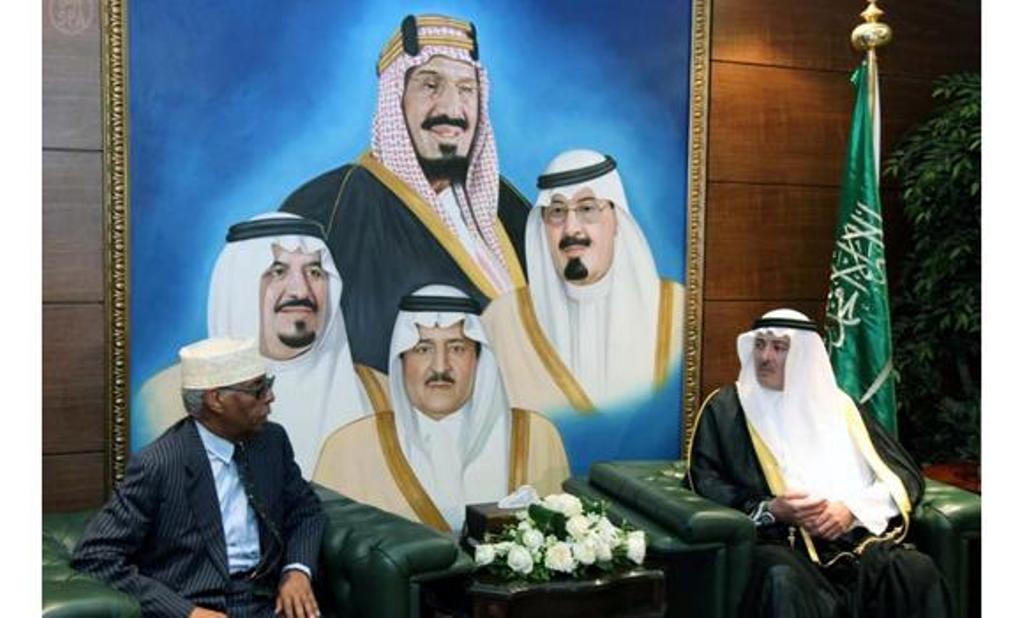 Riyadh (HAN) August 25,  2011. Public diplomacy and Humanitarian issues.  The Saudi Arabian national fundraising campaign for famine-hit Somalia, which was opened by Custodian of the Two Holy Mosques King Abdullah on Monday, raised more than SR160 million in addition to tons of food. King Abdullah gave SR20 million to the fund.

The donation was announced live during the televised campaign to help the famine victims in Somalia. The announcement was made by Ali Al Nashwan, board member of the foundation.
Recently, Prince Alwaleed received at his office in Riyadh Somali Ambassador Ahmed Abdullah Mohamed, who briefed the prince about the situation in Somalia giving accounts of the affected people.
Prince Alwaleed expressed his concern about the situation in Somalia and his readiness to assist the famine-hit people. Mohamed thanked Prince Alwaleed and assured him that the Somali Embassy in Riyadh would extend its support and cooperation to the foundation on this matter. The ambassador also met with foundation vice-chairwoman Princess Ameerah in Riyadh.
Many companies and banks have offered generous donations during the campaign.
SABIC said it would give SR5 million while the Saudi British Bank (SABB) announced a donation of SR1 million. “SABB’s contribution to the campaign comes in line with the noble initiative taken by our government for the support and relief of the distressed people of Somalia,” said Khaled bin Suliman Olayan, chairman of the bank’s board of directors.
Saudi Aramco employees have donated SR3 million during the past 24 hours.

“The amount is expected to increase given the enthusiasm shown by employees,” said Khalid Al-Falih, its president, adding that the company would donate an amount equal to the employees’ donation.
Arab News visited the campaign’s center at the Education Ministry stadium in the Faisaliya district and witnessed the good public response to the fundraising campaign as some Saudis and expatriates had come with their families to donate cash and other valuables.

Mohsen Al-Attas said it was his five children who encouraged him to come to the place and make the donation.
“I was planning to make the donation through my bank account but because of the enthusiasm shown by my children I decided to come here,” he told Arab News.
Al-Attas, who was with his children, brought clothes as well as food.
An Asian worker also came to the place to give his donation.

“I came here to express my support and solidarity with the Somali people who have suffered a lot because of famine and drought,” he said.
“Although I can make only a small contribution compared to others I decided to come here to express my sympathy toward the Somali brethren,” said the worker.
Arab News noticed that many parents brought their children to the campaign center to encourage them to make contributions for the poor and needy.
They wanted to inculcate the culture of giving in their children’s minds.

During its stay in the center, Arab News heard a lot of interesting stories. One child had said he would donate the money received as Eidiya (Eid money) to the Somalia relief fund while a bride said she would donate her mahr to the fund.
Campaign authorities said they have received tons of food and other donations in kind such as gold, jewelry, and other valuables whose value would be determined later.
The International Islamic Relief Organization of Saudi Arabia said it had distributed 7.47 million kilograms of food among the Somalis.