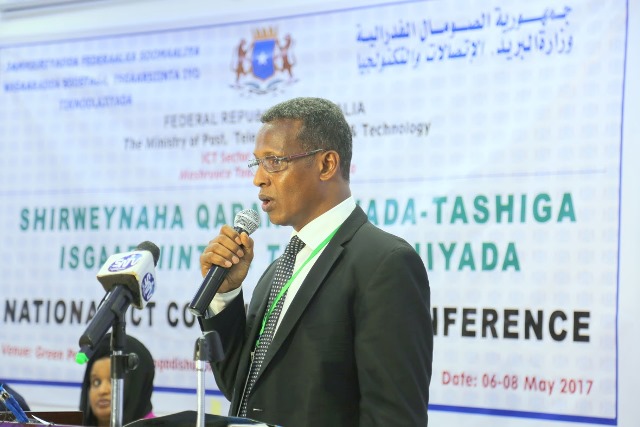 The Prime of Somalia, H.E. Hassan Ali Kheyre, has officially inaugurated a national consultation conference on telecommunications and technology for ICT stakeholders in Mogadishu from 6th to 8th May 2017.

More than 70 delegates from the ICT stakeholders, including the Parliamentary Committee on Information and Telecommunications, communications ministers from federal states, telecom operators, ISPs, The SIRAD Institute and university associations, are attending the conference.

The Minister of Posts, Telecommunications, and Technology, Eng Abdi Ashur Hassan, said this consultation was chosen as part of Ministry’s keenness to build confidence, exchange information and ideas through direct communication, and share Ministry’s annual plans for the sector.
according to Geeska Afrika Online reporter in Mogadishu, “In line with Government’s vision for new Somalia, we want to draw a new path for the sector because we want to achieve more and better results. And this starts with building the confidence of the stakeholders and everything else will follow,” said the Minister.

Addressing the ceremony, The Prime Minister stressed the significance of the sector and highlighted the development and contributions of the ICT sector in the local economy.

“ICT is an integral part of every economy. I urge the delegates to discuss sector priorities in the future, focusing on cooperation among the sector to ensure that all citizens have better access to quality and cost effective ICT solutions to bring socio-economic development,” said the Prime Minister.