By:FRED OLUOCH. The Somalia Police Force, which like all government institutions was incapacitated by a civil war that lasted decades, is looking to stand on its own feet, but challenges abound.

The force has been receiving training and financial support from the African peacekeepers and international partners. So far, 7,000 police officers countrywide have been trained. 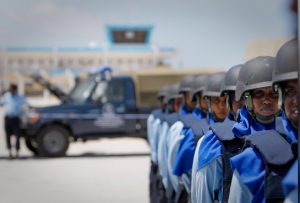 Mogadishu city — which was liberated from Al Shabaab in August 2011— is currently being guarded by the 5,400 Somali SPF, with assistance from the African Union Mission for Somalia (Amisom).

Amisom hopes that SPF will be fully functional by the time African peacekeepers leave Somalia in 2020.

“In a post-conflict environment such as Somalia, police cannot afford to be alienated from the population. There is a need to form strong partnerships with communities in order to efficiently and effectively deliv

er policing services,” said the chief inspector in an interview in Mogadishu.

The joint SPF and Amisom police are currently developing a community-based policing strategy that will facilitate the flow of information regarding possible attacks.

“But of even greater concern is the fear of enlisting officers who have violated human rights during the course of the conflict from 1991 to date,” chief inspector Marete added. 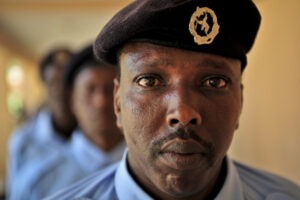 When SPF was reconstituted, most of the people who served in the former force were incorporated in the service. This presents another challenge because most of them are way beyond the retirement age.

The SPF also lacks sufficient numbers especially in the five newly-established state administrations. Besides, there is a need for co-ordinated support in terms of equipment and infrastructure.