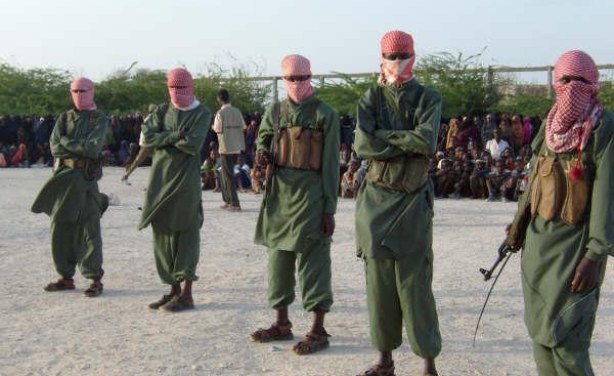 Nairobi  (HAN) October 23, 2015 – Public Diplomacy and Regional Security and stability Initiatives  News. The strengths and weaknesses of Al-Shabaab can be assessed from three different Somali lenses: territorial ownership, clan support, and operational. Why is Al-Shabaab, Islamist group affiliated with ISIS, targeting Kenya only? In fact, Al-Shabaab says its attacks are to protest the more than 3,500 Kenyan soldiers participating in the African Union peacekeeping mission in Somalia. But if that is the case, why doesn’t Al-Shabaab target Kenyan military bases rather than attacking undefended so-called soft targets such as Kenyan malls, villegers, business travelers  and universities?

According to Abdi Sheikh of Reuters reported today that A senior Al-Shabaab commander and about 20 of his followers have pledged allegiance to Islamic State, the first move of its kind to emerge in the Somali militant group.

There was no immediate reaction from al Shabaab’s overall leadership, which aligned itself in 2012 to al Qaeda, a group that has declared Islamic State’s leader illegitimate.

Experts have been watching to see if the rise of Islamic State in Syria, Iraq and other battlefields, would draw al Shabaab’s public support, but said the impact of any such alliance would be largely symbolic given geographical distance would hinder an exchange of material supplies.

“We, the mujahideen of Somalia, declare allegiance to the caliph as Ibrahim ibn Awad ibn Ibrahim al-Awad al-Qurashi,” Abdiqadir Mumin, an al Shabaab commander in the Puntland region of Somalia, said in an audio tape published on YouTube.

A follower of al Shabaab’s Mumin confirmed the veracity of the recording declaring allegiance to al-Qurashi, better known as Abu Bakr al-Baghdadi, the leader of Islamic State and self-proclaimed caliph of the Muslim world.

“Senior leader Abdiqadir Mumin and his 20 fighters, including me, joined ISIS,” one of Mumin’s supporters told Reuters by telephone, using one acronym for Islamic State.

Mumin had been based in the Galgala hills in Somalia’s semi-autonomous Puntland region, said the supporter, who asked not to be identified. The 20 came from a group of 300 in Galgala, he said, adding that his group had now moved to another area.

“The other fighters rejected us and remained in the Galgala hills,” he said.

There are no clear figures for the strength of Al-Shabaab, but diplomats put it at several thousand fighters. One expert said the announcement suggested a small split in the ranks.

Al-Shabaab, which ruled much of Somalia for several years until 2011, was driven out of most urban centres by an offensive launched by African Union forces and Somali troops last year. Some were driven north to Puntland, experts say.