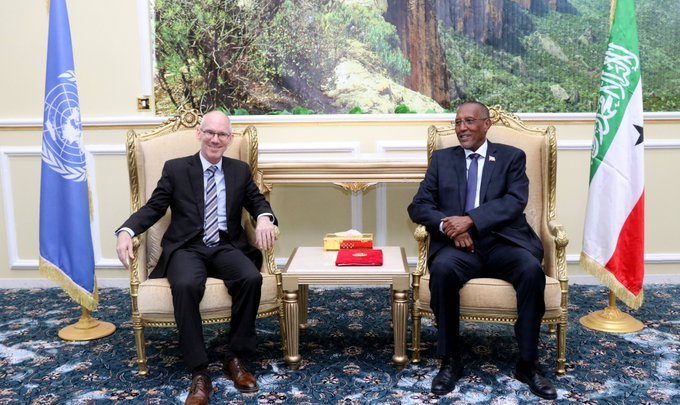 Share on Facebook
Tweet on Twitter
ADDIS ABABA (HAN) November 30.2020. Public Diplomacy and Regional Stability Initiatives News. Monitoring Regional Issues. By Mohamed Mohamud Adde. Mr. James Swan, the special representative of the UN secretary general and head of UN Assistance Mission (UNSOM) is an experienced diplomat with a long career in the United States Government.
In addition to that, he spent most of his time in Somalia and played influential role. He also witnessed many peaceful political transitions for the last twelve years.
In his interview with Al Jazeera, the central question which he had been put to him was provocative, simplistic and misleading.
How dare Al Jazeera can challenge the impeccable work of the UN – led by experienced expert. Aljazeera can not fool the world opinion, let alone the Somalis by posing this kind of question, ” Has the UN failed Somalia?”
Surely, Al Jazeera journalists are familiar  that Somalis are resilient people and failure is not one of their options. It is absurd. The world has changed when it comes to information technology.
With respect,  I would like to remind you that misinformation has become a thing in the past. Somalis can speak for themselves. It is about time Al Jazeera to stop disrespecting Somalia.
Coming back to the piont, Mr. Swan and his team have been doing a fantastic job and Somali people are thankful for that and they know their friends, who stood with them along very hard journey.
Independent analysts believe that the country is recovering slowly and steadily.  There is no turmoil, no mass deaths and no displacements to speak off. The fact is that about a quarter of the population have been saved with UN programs and funds.
I am not here to defend the UN institution, but to educate you, in order to avoid ill- researched work to tarnish the UN and Somalia. What I don’t want to hear is a cheap propaganda in election year where Qatar is the main culprit.
In my observation in Somali politics, I think, MANY Somalis agree with me that Qatar is backing the wrong horse in Somali politics.
It is not secret that Qatari money is used to undermine the democratic process in Somalia. That is the real issue here. If Aljazeera wants to high light the current Somali political problems, look no further, but your quarters. The image and the influence of Qatar in Somalia are at stake.
The role and the work of the UN in Somalia is crystal clear and transparent but what is getting scrutinized now is the role of Qatar. It needs to come clean. It has a chance to redeem itself before it is too late. By putting facts into prospective doesn’t mean I dislike Qatar.
It is clear that the opposition groups are working to cut Qatar out of Somali politics for good… if the current policy continues, does it worth? I don’t think so.
My core argument is that the Qatari policy is on the wrong track and needs to be corrected. The UN is harmless part here and Aljazeera can NOT speak on Somali behalf in this critical time. The end.

By Mohamed Mohamud Adde; Academic and Independent Somali Political Analyst based in Mohadishu.

Opinions and Views published on HAN & Geeska Afrika Online Journal  are those of the authors, writers and contributors only.