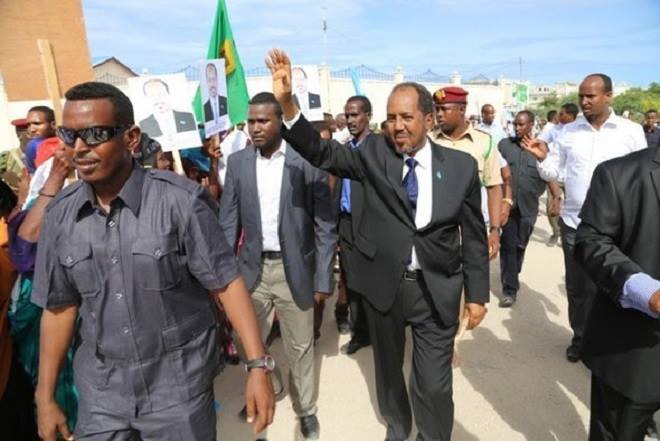 Mogadishu (HAN) May 12, 2014. A diplomatic letter from almost half of Somali parliamentarian calls on president Hassan Sheikh Mohamoud  to step down or be forced out to insure security and the economic well-being of Somali society, according to their statement.

President Hassan Sheikh Mohamoud is fighting for his political life after more than 100 members of parliament petitioned him to resign over his failure to tackle security. If he didn’t go voluntarily, a letter they sent him on 8 May said, they would call for a vote of no confidence. Hassan Sheikh is also accused of shutting his eyes to corruption and tolerating incompetence.

Two MPs have been killed by Al-Shabaab militants in the last month alone and their colleagues are incensed by the government’s inability to get a grip on security in Mogadishu. Read Full article: Africa confidential report.

The security Issue: A police officer in Somalia says a suicide car bomber thought to be targeting a former governor detonated his explosives in the town of Baidoa, killing at least 11 people.

“The target was a pick-up truck transporting a senior local official,” police spokesman Mohamed M. said.  “He escaped the attack but two of his security guards were killed along with three civilians.”
Mohamed Salad said at least 20 others were wounded in the Monday bombing. Salad said three soldiers were among those killed.

The bombing took place in a crowded business district in Baidoa, in southwest Somalia, where members of the militant group al-Shabab control a lot of territory.

Al-Shabab has carried out dozens of bomb attacks in Mogadishu and other cities in recent years. The militant group is under pressure from African Union troops attacking the territory it controls.

“We take security very seriously. We have increased patrols and beats and provided additional personnel and vehicles to ensure everyone is safe here in Garissa,” Harun Khator, Garissa county commissioner, told Al Jazeera, adding the government has also bolstered intelligence gathering in the county.

As security forces in Kenya, Garissa scramble to prevent future attacks on churches and businesses, worshipers at St Mary’s Catholic Church just want an end to “Operation Linda Nchi” – Swahili for “protect the country” – as the incursion into Somalia to target al-Shabab has been called.

“It has only made our lives here worse. Our lives were very good before. We used to come to church at night to pray – now that is not possible,” said the civil servant Kageni.

The other Major issues:  Continued conflict, compounded by poor rains and funding shortfalls, are threatening the few gains made in Somalia since an extreme famine less than three years ago, with the United Nations and aid agencies warning the troubled country could be sliding back into a food crisis.