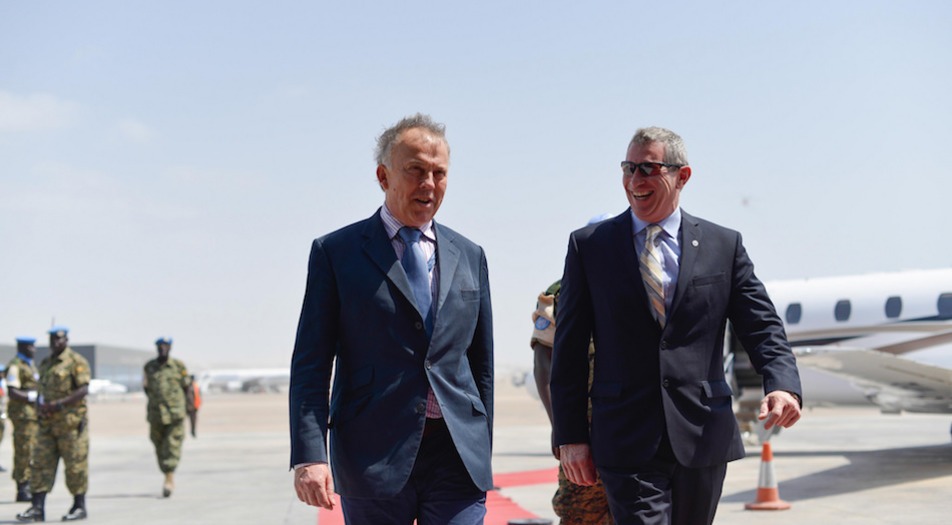 The SRSG was received at Aden Abdulle International Airport by Somalia’s Minister of Foreign Affairs and Investment Promotion Abdusalam H. Omer, senior United Nations officials based in Somalia, among them, the Deputy SRSG for Somalia and UN Resident and Humanitarian Coordinator Peter de Clercq, the Director of Mission Support at the United Nations Support Office in Somalia Amadu Kamara; and senior officials of the African Union Mission in Somalia.

In a welcoming ceremony held at the airport, Minister Omer highlighted the significance of SRSG Keating’s position. “The expectation is high, the job is big and the problems are numerous. Not as much as they used to be, but still it’s a challenge. So we wish him good luck and I will be working with him every way I can and the Somali Government will work with him in every way we can to help him succeed,” stated the minister.

“I definitely see my job as helping Somalis fulfil their own vision but also to help maintain international coherence and support in the times ahead,” said the SRSG in his brief remarks. “I am really looking forward to meeting you and your colleagues in Government, but also civil society in Somalia, as well as getting to know UN colleagues, working with all of you and supporting your work, as well as our colleagues in the military, as well as the broader diplomatic community.”

SRSG Keating has extensive experience in supporting political and peace building transitions and leading humanitarian and recovery programmes in Afghanistan, the Middle East and Africa.

Appointed Associate Director of the London-based independent policy institute Chatham House in 2012, he concurrently served as Senior Adviser to the UN Secretary-General’s Special Envoy to Syria. He was Deputy SRSG and United Nations Resident and Humanitarian Coordinator in Afghanistan from 2010 until 2012.