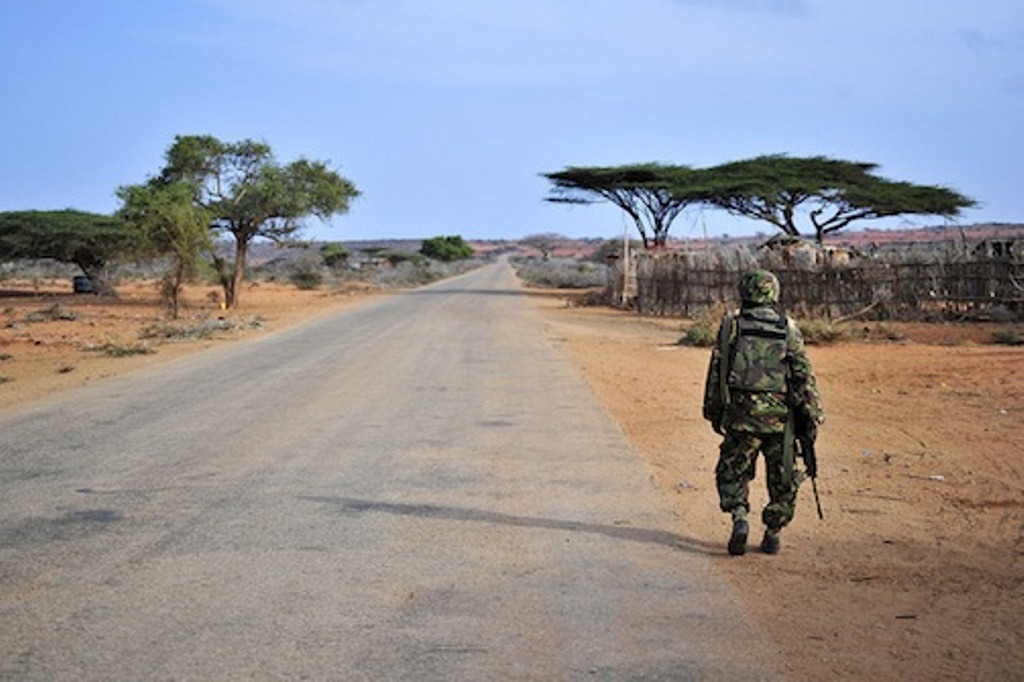 Washington (HAN) January 7, 2015 – Public diplomacy and the Horn of Africa Intelligence analyst files. Expert Analysis, Your Power & Regional Influence Magazine, opinion page “Somalia’s New Race Against Time,” By. Abukar Arman is a former diplomat (Somalia’s Special Envoy to the US). Ambassador Abukar is a regular Contributor of Geeska Afrika Online and widely published analyst. In 2010,  the former President of Transitional Government of Somalia, Sheikh Sharif Sheikh Ahmed has appointed Ambassador Abukar Arman as his Special Envoy to the United States of America.

I’ll venture say that 2015 could be the year in which various nascent movements could confluence into a robust unified one that puts the nation’s interest first, and, in the process, could set in motion profound political transformation.

Despite the roller coaster of political and security-related drama that dominated the headlines in this past year, I still remain optimistic about Somalia’s future — cautiously of course.

For Somalia, a New Year’s resolution is an existential affair of “change now or cease to exist.” That said, change requires certain level of self-awareness through which intention is cultivated. It also requires strategy and the will power to implement.

Somalia has a long “to do” list all of which are important, though some being more important than others. Over the years, I have written about the significance of organic reconciliation and how it is crucial for fixing our broken nation and healing our traumatized hearts. I still insist it is the only way to save our rapidly disintegrating nation.

There are many hurdles that make such reconciliation an arduous proposition and there is one particular that makes it impossible- Ethiopia’s stealthy ever-expanding influence on the ground both militarily and politically. Here I excluded Kenya because the deterioration of security in its mainland and Parliament and public pressure makes its emulative project unsustainable.

Imperial tenacity:  On Jan 2014, over five years after the failure of its military occupation, Ethiopia has mobilized thousands of its troops into Somalia as a result of a dubious deal-making that I refer to as Injera diplomacy and its cronies within the Somali government. All paid for by the international community as part of the U.N.-mandated African Union forces AMISOM.

According to a statement by AMISOM mission, “The Ethiopian deployment will permit Burundian and Ugandan forces to move into parts of Lower and Middle Shabelle.” Inadvertently or otherwise, this has given a legal justification to open the gates for an Ethiopian Trojan Horse.

Today, Ethiopian troops are expanding into various strategic locations within Somalia. And they are handpicking their delivery men in each of these locations. This — as well as Kenya’s role in Jubbaland — remind me of a something that I heard in a debate that I once had with a senior Western diplomat over the perpetual problem that IGAD and its Western partners were creating in Somalia- solving one problem by creating ten others. “We are not like your neighbors; we are not interested in who would be the next mayor of town X or the next governor of region Z,” he said.

In his recent visit to participate in the controversial inauguration of yet another “president” of a highly contested federal-state (South West 3), President Hassan Sheikh Mohamud of the federal government was welcomed to Baidoa by a military official with the Ethiopian contingent. This was done against the democratically asserted will of the local masses that already elected another president for the same territory that is claimed by the aforementioned federal-state. Confused? Don’t worry, you are not alone.

So, President Mohamud and his counterpart — President Sharif Hassan Aden — were led onto a platform managed by the said Ethiopian official to take a salute as the flags of Somalia, South West 3 and Ethiopian flags were towering behind them. One could not find a more profound metaphor for our national disgrace.

Perception management: Despite their dubious military intervention, Ethiopia has masterfully lulled Somali “leaders” into a false sense of security and tantalized them with mirage of power.

In addition to its under the radar military mobilization to expand its sphere of influence, Ethiopia has launched a successful campaign of co-option, indoctrination and silencing of key individuals and institutions. Many media professionals were lured by the offer of intensive certification program in journalism, first class hospitality, and generous stipends. Likewise, some officials in the security sector, parliament, civil societies and the political elite.

Ever since the reemergence of the Ethiopian occupation, all key officials in the armed forces, all governors, and ministers with overt sense of patriotism were systematically removed or permanently silenced. The former are often attributed to cockamamie political issues; and the latter to al Shabaab.

These individuals are, by and large, at liberty to scrutinize the government but not the specter of Ethiopian domination.

In today’s camouflaged occupation, Ethiopia has perhaps outdone its own expectation. It now controls all of the strategic seaports except Mogadishu and its troops are present in almost all of Somalia.

Proudly savoring the success of his country’s stealth takeover of Somalia, Ethiopian Prime Minister Hailemariam Desalegn said his troops already control “more than 60 percent of Somali territory.” He swiftly offered to replace the 850 Sierra Leone contingent that was based in one of the most important strategic seaports (Kismayo) which is part of Jubbaland federal-state that has a president of its own. This contingent has abruptly left only after 20 months, though AMISOM soldiers are paid as high as ten times the monies they make in their respective countries. As such, many African soldiers covet the opportunity. Some AMISOM soldiers were reported to intentionally play softball with al Shabaab in order to prolong their military tour in Somalia for the over generous salaries they receive.

But what makes the matter even more questionable is the fact that Ethiopia, as the “Guarantor” of the Jubbaland Compromise Agreement, which stipulates the integration of the militia group under the command of President Ahmed Islaan Madoobe and the Somali government forces, would not want to make good on an agreement that it engineered and brokered.

Could it be because of its clandestine security arrangement with Kenya whose forces, as mentioned before, are about to retreat? In his own way, Kenya’s Deputy President has confirmed that in a recent interview. Kenya’s interest to annex part of Jubbaland for a “buffer zone” in order to tip the scale on its illegal claim to Somali waters is widely covered.

Power of One: In Somalia, during the military government, there used to be an old man in Mogadishu that most locals knew as “Odagii waalnaa” (that crazy old man) and others “kacaan diid” (anti-revolution).

The old man had a habit of taking strolls throughout the center and the highly populated spots of the old city and periodically shouting at the top of his lungs “Allow naga soo gaar” which roughly translates as “Lord, come in haste to our rescue.” And this, needless to say, used to get the old man frequent mandatory disappearances from the public sight. Whenever he was released, he used to reassume his campaign from where he left of.

His bold expression of discontent with the government has inspired many in the eighties. Alas, those who adopted his peaceful method of exposing and resisting a dead-end system were ultimately overrun by gun-wielding clan gangs blinded by instant gratification who led the nation into violent chaos.

Today, there are many Somalis, both in the homeland and the diaspora, that carry peaceful public awareness campaigns, in their own way and at their personal risks. These are mostly the younger generation who are disillusioned by how the political elite have become facilitators of their own subjugation and that of the nation. The veteran cartoonist Amin Amir whose fan base is mostly the younger generation recently depicted the Somali politician as a pitifully subdued giant led in leash. It is making wide circulation in social media. Needless to say, there are many poets, singers and other artists like Amir.

In the Periphery: Landlocked Ethiopia has purchased nine vessels worth over $300 million from China. These commercial vessels are based in the overcrowded Djibouti port. During the joint ceremony held in Djibouti on May 2014, Djiboutian President Ismail Omar Guelleh, had this to say “Djibouti gives a port service to Ethiopia but it does not consider that it is giving the service to another country but regards it as it is doing it for itself… We believe that Ethiopia is Djibouti and Djibouti is Ethiopia, no difference at all.” If this was an emotive misspeak by seemingly a much more dignified and wiser leader is for history to judge.

Whether or not President Hassan Shiekh Mohamud and Ahmed Mohamoud Silaanyo had paid their homage and kissed the Ethiopian imperial ring in their recent meeting in Djibouti or not, history will tell. Meanwhile, we could resign to err on their side.

In conclusion, Somalis are now in a race against time. They face the dilemma of either hanging together or getting hanged separately. That is why Ethiopia’s role in AMISOM must be resisted in every peaceful aspect, and the Somali government as well as all cardboard presidents of different sizes must be pressured to change course.

As mentioned above, there are a number of individuals and groups who are already resisting and exposing. Once these elements come together, I not only think that change is imaginable, but is immanent.

In that context, I’ll venture say that 2015 could be the year in which various nascent movements could confluence into a robust unified one that puts the nation’s interest first, and, in the process, could set in motion profound political transformation.