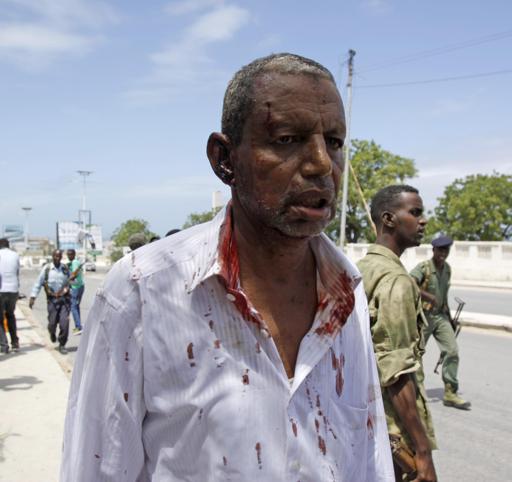 Mogadishu (HAN) May 25, 2014. In Mogadishu terror attacks, Frightened Somali members of parliament blamed the national security agents for failing to prevent the attack, but other politicians praised the army for limiting the attack’s damages. (Source AP photo)

The U.N. representative to Somalia, Nicholas Kay, said the parliament represents the people of Somalia and their hopes and aspirations for a peaceful country. Long live the people and the republic of Somalia.
“Today’s attack is an attack against the people of Somalia for which there can be no justification,” said Kay, who commended the “prompt” response by Somali and African Union security forces.

It is positive development for Somalia has a minster who accepts responsibility. Abdikarim Guuleed for his service faced difficult and thankless job and his resignation is plus for the administration and the country as well, however, changing personality is not enough. It is time to engage all stakeholders to find political solution.
The United Nations Security Council has expressed “outrage” after Shebab rebels launched an attack on the Somali parliament that left at least 10 people dead.
Security sources in the country said Saturday’s “complex attack” involving bombs and gunmen with suicide vests was finally brought to an end after more than four hours by Somali security forces and African Union troops.
The all  Security Council members said they were “outraged that al-Shebab has attacked the federal parliament, an institution which represents the Somali people and their legitimate hopes for peace, prosperity and stability.” The deadly assault and “other senseless acts of terrorism would not diminish” their support for the African Union’s AMISOM mission and other actors supporting peace in Somalia, they said.